Congratulations to "Bn100", the winner in Jodi's giveaway. Thank you to all who participated!

Where family bonds are made and broken, and where young love sparks as old flames grow dim, Ransom Canyon is ready to welcome—and shelter—those who need it . 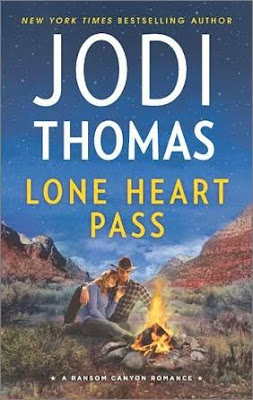 With a career and a relationship in ruins, Jubilee Hamilton is left reeling from a fast fall to the bottom. The run-down Texas farm she's inherited is a far cry from the second chance she hoped for, but it and the abrasive foreman she's forced to hire are all she's got.

Every time Charley Collins has let a woman get close, he's been burned. So Lone Heart ranch and the contrary woman who owns it are merely a means to an end, until Jubilee tempts him to take another risk—to stop resisting the attraction drawing them together despite all his hard-learned logic.

Desperation is all young Thatcher Jones knows. And when he finds himself mixed up in a murder investigation, his only protection is the shelter of a man and woman who—just like him—need someone to trust.

The Georgetown street in front of Jubilee Hamilton’s office looked more like a river of mud than a beautiful old brick lane.

“Why does it always have to rain on election day?” she asked the life-size cutout of her candidate.

The few volunteers left in the campaign office were cleaning out their desks. The polls hadn’t been closed an hour, and Jubilee’s horse in the race had already been declared the loser.

Or maybe she was the loser. Two months ago her live-in boyfriend, the man she’d thought she’d someday settle down with and have the two-point-five kids, had said goodbye. David had called her a self-absorbed workaholic. He’d accused her of being cold, uncaring, thoughtless, self-centered.

When she’d denied it, he’d asked one question. “When’s my birthday, Jub?”

She’d folded her arms as if to say she wasn’t playing games. But this time her mild-mannered lover hadn’t backed down.

“Well,” he stared at her, heartbroken.

When she didn’t answer, David asked again. “We’ve been together three years. When is my birthday, Jub?”

“Not even close.” David picked up his briefcase and walked toward the door. “I’ll get my things after the election is over. You won’t have time to open the door for me before then.”

Jubilee didn’t have time to miss him, either. She had an election to run. She worked so many hours she started sleeping at the office every other night. Sometime in the weeks that followed, David had dropped by the apartment and packed his things. She’d walked in on a mountain of boxes marked with Ds. All she remembered thinking at the time was that she was glad he’d left her clean clothes still hanging.

A few days later the Ds were gone and one apartment key lay on the counter. There was no time to miss him or his boxes.

Jubilee had thought of crying, but she didn’t bother. Boyfriends had vanished before. Two in college, one before David while she lived in Washington, DC. She’d have time for lovers later. Right now, at twenty-six, she needed to build her career. As always, work was her life. Men were simply extras she could live with or without. She barely noticed the mail piling up or the sign on the door telling her she had six weeks before she had to vacate the premises.

Then the rain came. The election ended. Her candidate had lost. She’d lost. No job would be waiting for her at dawn. No David would be standing in the door of their apartment this time, ready to comfort her.

Her third loss as a campaign manager. Three strikes, you’re out, she thought.

She walked through the rain alone, not caring that she was soaked. She’d given her all this time and she’d ended up with nothing. The candidate she’d fought so hard for hadn’t even bothered to call her at the end.

When she unlocked the door to the apartment that now looked more like a storage unit than a home, she wasn’t surprised the lights wouldn’t come on. David had always taken care of minor things like paying the bills.

She sat down on one of the boxes and reached for her phone before she realized she had no one to call. No friends. No old school buddies she’d kept up with. All the numbers in her contacts were business related except the three for her family. She scrolled down to the Hamiltons.

First number, her parents. They hadn’t spoken to her since she’d missed her sister’s wedding. Jubilee shrugged. Really, how important was a bridesmaid?

Destiny’s wedding was beautiful anyway. Jubilee saw the pictures on Facebook. Had she attended, as the too tall, too thin sister, she would have only crumbled Destiny’s perfection.

She moved down the list. Destiny. Her sister, six years older, always prettier, always smarter, never liking having her around.

Jubilee ran through memories like flashcards of her childhood. Destiny had cut off all her hair when she was three. Told Jubilee she was adopted when she was five. Left her at the park after dark when she was seven. Slashed her bike tires when she was ten so she couldn’t follow along.


Oh, yeah, Jubilee thought, don’t forget about telling me I was dying when I got my first period. The whole family was laughing as she’d written out her will at twelve.

“It is Thomas’s understanding of the Texas spirit infused in her story that deeply touches readers’ hearts and souls.” –RT Book Reviews

"Jodi Thomas is a masterful storyteller. She grabs your attention on the first page, captures your heart, and then makes you sad when it is time to bid her characters farewell. You can count on her to give you a satisfying and memorable read." —Catherine Anderson, New York Times bestselling author

“When it comes to providing a rich backdrop of historical flavor with a beautiful love story, author Jodi Thomas certainly has cornered the market.” –The Romance Reviews

ABOUT THE AUTHOR:
A fifth-generation Texan, JODI THOMAS sets the majority of her novels in her home state. Thomas is a marriage and family counselor by education, with a background that enables her to write about family dynamics. Honored in 2002 as a Distinguished Alumni by Texas Tech University in Lubbock, Thomas enjoys interacting with students on the West Texas A & M University campus, where she currently serves as Writer in Residence. When not working on a novel or inspiring students to pursue a writing career, Thomas enjoys traveling with her husband, Tom, renovating a historic home they bought in Amarillo, and "checking up" on their two grown sons.

Giveaway:
One person leaving a comment or email entry will win a copy of LONE HEART PASS.

Giveaway ends 11:59pm EST May 6th. Please supply your email in the post. You may use spaces or full text for security. (ex. jsmith at gmail dot com) If you do not wish to supply your email, or have trouble posting, please email maureen@JustContemporaryRomance.com with a subject title of JCR GIVEAWAY to be entered in the current giveaway. US residents only.
Posted by Maureen A. Miller at 12:30 AM