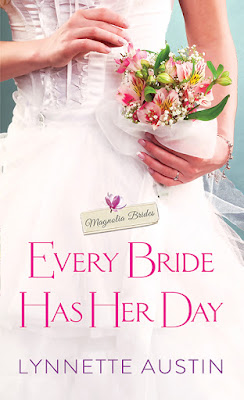 Every Bride Has Her Day
Magnolia Brides, Book 2

CAN LOVE REVIVE A WILTING HEART?

Cricket O’Malley can’t wait to plant roots back home in Georgia, where she’s returned to restore an abandoned flower shop to its former glory. The only blemish? Her neighbor’s house is even more neglected than her old flower shop, and its occupant seems as surly as he is darkly handsome.

Devastated body and soul after a tough case went south, New York City detective Sam DeLuca thought he’d have no trouble finding solitude in the quiet Georgia town of Misty Bottoms, but his bubbly neighbor seems determined to shine happiness into Sam’s life. Sam is equally determined to close himself off, but his heart says otherwise…

About the Author
The luxury of staying home when the weather turns nasty, of working in PJs and bare feet, and the fact that daydreaming is not only permissible but encouraged, are a few of the reasons middle school teacher Lynnette Austin gave up the classroom to write full-time. Lynnette grew up in Pennsylvania’s Alleghany Mountains, moved to Upstate New York, then to the Rockies in Wyoming. Presently she and her husband divide their time between Southwest Florida’s beaches and Georgia’s Blue Ridge Mountains. A finalist in RWA's Golden Heart Contest, PASIC's Book of Your Heart Contest, and Georgia Romance Writers' Maggie Contest, she’s published five books as Lynnette Hallberg. She’s currently writing as Lynnette Austin. Having grown up in a small town, that’s where her heart takes her—to those quirky small towns where everybody knows everybody...and all their business, for better or worse.  Visit Lynnette at www.authorlynnetteaustin.com.

Lynnette Shares a Scene
Small towns are known for their warmth, their caring, and their quirky characters. Small Southern towns? They’re known for over-the-top quirky characters! And that crazy aunt? She’s not hidden away somewhere. Oh, no! She’s proudly set right out there on the front porch with a glass of sweet tea in hand!

In Every Bride Has Her Day, Sam DeLuca, a NYC detective, is dropped smack-dab into the heart of Dixie. Even though he spent part of several summers there as a young boy visiting his aunt, he’s not prepared for Low Country life. Since he drove into town on his Harley, he needs a truck while he works on the house his aunt left him. In this scene, he’s just bought old Lem Gilmore’s rusted-out pickup.

“You won’t mind haulin’ a few things for me once in a while, will you?” Lem asked.

Sam’s head swiveled to him. “What?”

“Well, I don’t have a truck no more.” Lemuel pulled off his ragged Atlanta Braves ball cap and scratched his head, the wisps of gray hair standing on end. “What am I gonna do for haulin’ stuff I need hauled?” 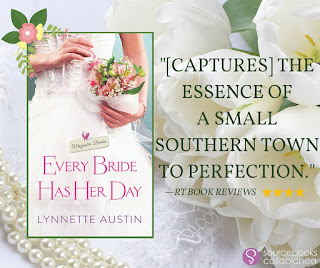 Sam understood he was doomed. “Sure. Give me a call if you need anything hauled.”

“Every Tuesday I cart a load out to the local dump. Ain’t no way I’m payin’ somebody to carry my garbage away for me.”

“Yep. Like clockwork. Lyda Mae, that’s the wife, depends on it.”

Sam rubbed at the nagging pain between his eyes. “Any special time on Tuesday?”

“Best if you get there at ten. Not as busy then.”

Resigned, he said, “All right. I’ll see you Tuesday at ten.”

“Nope.” He swiped a hand over his chin. “If we’re gonna be there at ten, you’ll want to come about twenty minutes before that so’s we have time to load up and drive there.”

We. Sam’s stomach dropped. Maybe he should give the old man his truck back, tell him to keep the money if it came to that.

“We could go into town and have ourselves a cup of coffee on the way home. Chew a little fat.”

Sam gave in graciously. “Sure thing.” He nodded at his Harley, then at the pickup. “Would you mind following me home in the truck? I’ll drive you right back.”

The old man squinted toward the sun and rubbed at his chin stubble again. “Don’t think that’ll work. Jeopardy’s gonna be on in fifteen minutes or so. The wife and I never miss it.”

“I can have you back in less than twenty minutes.”

“You miss the categories, you might as well not watch any of it,” Lem explained.

Sam closed his eyes and counted to ten. “All right. I’ll be back for the truck.”

Sam drove away on his Harley, the new owner of a rusty old pickup truck named Betsy. And a nine-forty garbage run on Tuesday with Lemuel Gilmore.

Wasn’t there some story about a blond chick who fell into a rabbit hole and everything got all screwed up? Maybe he’d fallen into that same hole.

He had a bag of kibble in his kitchen, an old rusted out truck in his drive, and a dog.

Oh, and a date to take Lem’s garbage—and probably Lem—to the dump tomorrow.

How the hell had all that happened in a single day of minding his own business?

I couldn’t help but laugh as I wrote this scene. If Sam was a weak character, someone who generally folded to others’ desires, the scene wouldn’t be funny. But Sam is used to being in charge. Suddenly, with Lem and Misty Bottoms as a whole, he’s so off-center, he doesn’t know which end is up. It’s fun to take a character totally out of his element and watch how he deals with it. I enjoy tossing my characters down that rabbit hole!