Can you tell us a little about yourself?

Thanks so much for hosting me today; I’m thrilled to be here! Where to begin…I grew up in in Negreet, Louisiana, a tiny town in the Northwest part of the state near the Texas border surrounded by family. We rode motorcycles (dirt bikes) through the woods as transportation to friends’ houses because the terrain was too rough for bicycles from the time we were nine or ten years old. There wasn’t much to do but read. So, comic books, Nancy Drew mysteries, and then Harlequin Romances were my main source of entertainment growing up.

Steel Magnolias was filmed in my college town of Natchitoches, Louisiana during my senior year and they took over the campus and our lives. It was such fun! So, I have small town Southern girl roots through and through. I’ve lived in the Atlanta suburbs for the past twenty or so years with my husband, furry friends and three nearly-grown kiddos. I’ve been civilized, I supposed, but every time I go home, my drawl comes back.

Do you like to write while listening to music?

Yes, I love listening to music when I write. What playlist inspires you? I listen to country ballads sung by male artists, mostly. There are some really great new songs out there that are really romantic and in keeping with the tone and mood of my writing. A few are:  What You Mean to Me by Brett Eldredge, Die a Happy Man by Thomas Rhett, and the YouTube Country Songs of 2015 channel. I write small town Southern stories, so you see why this music is great for getting me in that mental place. When not writing, I’m all over the place with music genres.

Can you offer any advice to new or aspiring authors?

I know this sounds cliché, but don’t give up. It took me seven years to get a book deal and many, many rejections—like, so many. The combination between your timing, skill, and luck is such a delicate dance. If you work hard, continue to improve your craft and learn, and make connections and friends of other writers, it will happen. So many writers give up too soon.

Do you have any input in the cover design of your novel?

Yes! I’m so specific, I probably drive my cover people crazy. They send us what’s called a cover art fact sheet that asks lots of questions about the characters, setting, and our preferences and how we envisioned our cover. Since I was just starting out with my first book last June, I felt it vital that my covers reflect how I wanted to move forward with my personal brand. I write on the line between women’s fiction and contemporary romance, so I wanted my cover to be romantic, but not necessarily an embracing couple. And no faces, only because I have a thing about my readers imagining their own characters based on description.

How many hours a day do you dedicate to your writing?

Probably not enough. I try to work while my kids are in school. But there are groceries to buy and laundry to do. Facebook. You know, all the important stuff. When it’s going really well, I don’t want to stop the momentum. When it’s not going quite so well, let’s just say, everything else seems very very important.

Who are some of your all-time favourite authors?

Eloisa James, Karen White, Julia Quinn, and of course, Kristan Higgins, who was kind enough to read Love, Alabama do write my front cover blurb. I love so many authors I can’t name them all. I learn something different from each of them. 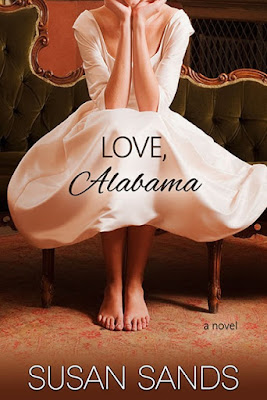 Emma Laroux's a fallen Southern beauty queen whose past is barely whispered about in her small town. But the secrets and lies surrounding the scandal from long ago still haunt her, and something about Matthew Pope holds the answers. If only she could put her finger on it.

Matthew Pope wonders what awful karmic thing he’d done to land him in Podunk, Alabama. But when he sees Emma again after all this time, he knows he's still the only one that holds the key to unlock the truth of her past...

Will a shared moment in time ten years ago threaten what might be the best thing that’s ever happen to either of them—each other?

Emma pulled up behind Matthew’s car and frowned, noticing that his taillight was busted. She got out and pulled the bag of items from the back seat, not giving his car much more thought.
Knocking gently on the door, she figured she would leave the bag on the front step if he didn’t answer. He might be sleeping. But what if he’d gotten light-headed, fallen, and hit his head on the bathtub and was knocked-out cold, lying in a pool of his own blood? The thought, while mildly ridiculous, gave her just enough pause to knock again, this time more loudly.
No answer. She rang the bell. No answer. Now she was concerned. His car was in the drive. He was definitely home. Her heart began to beat in her
ears. She tried the door. Locked. She looked through the leaded glass front door. No movement. Nice house. She knocked again. Emma still had the bag in her arm. So, she carried it with her around the back of the house to the screened in
porch. The screen door was open, so she stepped up onto the pretty porch with the comfy furniture. It appeared that Matthew spent time out here. There were pillows, a rug, a throw, a couple books, and a lamp. Nice.
She knocked on the back door. No answer. She didn’t see anyone inside. She bit her lip and tried the door. It opened. “Hello? Matthew?” No answer. She moved inside and let her gaze wander around the room. It was cozy and well decorated for a guy’s place. She noticed the kitchen to the right and headed in that direction. She put her bag on the kitchen counter then headed toward what she knew must be the master bedroom. This house was similar in style to hers.
She called out to him again. Emma was getting worried now. Why didn’t he answer?
As she entered the bedroom, she noticed it the blinds were closed and it was rather dark, but she could see no one was in the bed. Then, she realized the shower was running. Against any kind of decent judgment, she moved toward the bathroom door. She couldn’t help herself; she peeked inside. He wasn’t standing in the shower; he was sitting on the floor. She panicked and rushed towards him before her brain informed her to actually speak his name.
She pulled open the door, certain he was dead before she shrieked, “Matthew, open your damned eyes!” He did. Open his damned eyes. Opened them really wide. “Emma? Why are you in my shower stall?”
She really didn’t have a great answer to that. “Oh, Lord. I thought you were dead.” It was the best she could do.