Hanging With The Fast Boys

Congratulations to "Ada", the winner in Alexia's giveaway. Thank you to all who participated!

I’ve been a fan of Formula 1 racing for as long as I can remember. Which, I admit, is slightly odd for a girl born on the west coast of Canada. F1’s fan base is mostly European and predominantly male, although a lot more women are getting into it. Someone asked me about my interest in the sport recently and so I thought about it. I realized it was because my dad was a fan. He used to watch all the races and as we only had one TV in the house, I watched, too. Then as I grew older it became something we both enjoyed. And trust me, my father, as much as I loved him, was a product of his generation. The only time he ever entered the kitchen was to ask what time dinner would be ready. So it was hard for us to find common ground, but we did it in our appreciation for F1. Then I married a man who was the opposite of my father in almost every way, except for his love of Formula 1. Now that’s a passion we both share. Okay, there may be a few other passion that supersede it, but this one we can indulge in the family room in the middle of the day.

I knew as soon as I started writing romance that eventually I’d craft a story where the hero was a racecar driver. I pitched a couple of story ideas to an editor but she wasn’t interested. Then I wrote a book about a vintner and his new bad-girl neighbor (The Vintner and The Vixen). Of course, said vintner needed a charismatic, playboy brother to balance his uptightness and Daniel was born. Daniel was so intense from the moment I put his name on paper that I knew his story was next.
As with all Formula 1 drivers, winning is what they live for. Anything that interferes with that is to be avoided at all costs. This meant I had to present Daniel with the worst-case scenario: not only a woman who he found incredibly desirable, but one with a little boy equally as irresistible. And the race was on to see which would triumph, his devotion to his career or his growing love for Lexy and her son Max.

The other great thing about writing a story following the F1 races is that I got to research a lot of fabulous destinations. The story starts in London, makes a quick trip to France to Daniel’s home in the Loire Valley, then races (excuse the pun) off to Russia, America, Mexico, Brazil, and the United Arab Emirates before returning to Europe for the conclusion.
If you’ve never watched a Formula 1 race, don’t worry I’ve not got too technical. This is a sport where the glitz and glamour that accompany race weekend are almost as important as the fast cars.

I hope you’ll enjoy Daniel and Lexy’s story. In the meantime, I’m vicariously off to Argentina where I’m working on the third book in the Vintage Love series.

Giveaway:
What’s your favorite sport to watch or play? Comment on this post and the beautiful Maureen will select one person to receive an Amazon $10 gift card. 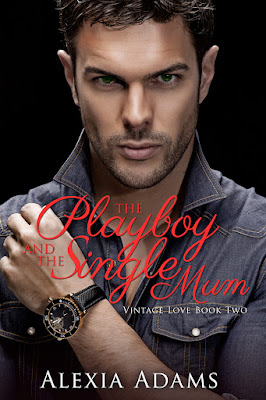 THE PLAYBOY AND THE SINGLE MUM

He lives in the spotlight. She has to exist in the shadows.

If Formula 1 racing driver Daniel Michaud is to win the championship, he must steer clear of all distractions. However a compromising photo has his sponsor demanding that he be chaperoned for the rest of the race season. It’s bad enough a sexy advertising executive is assigned to accompany him, but then they’re joined by her adorable car-obsessed son. It’s all Daniel can do to keep his mind on the track and off the tantalizing taste of love and family that could destroy his career.


Lexy Camparelli blames the Formula 1 circus for her parents’ divorce and the obsessive eating disorder that ruined her teenage years. To keep her job, she’s forced back into that high-stakes world. At least her heart isn’t in jeopardy, given Daniel’s playboy reputation. Then she discovers the gorgeous driver’s secret and it’s a race to see if Lexy can emerge victorious or lose everything—including custody of her son.


Giveaway ends 11:59pm EST April 22nd. Please supply your email in the post. You may use spaces or full text for security. (ex. jsmith at gmail dot com) If you do not wish to supply your email, or have trouble posting, please email maureen@JustContemporaryRomance.com with a subject title of JCR GIVEAWAY to be entered in the current giveaway.