Congratulations to "Linda M." and "Laney4", the winners in Mary's giveaway. Thank you to all who participated!

We all know about the cute little April Fool’s pranks like clear wrap on toilet seats and monster heads in the fridge. But how inventive were pranksters of the past?

A noble, fond of sending his servants on silly errands on April first, was the subject of Flemish poet Eduard de Dene in 1539. John Aubrey has the honor of the first British reference to “Fooles holy day” in 1686. And just a few years later in 1698, one April Fool’s joker sent folk to the Tower of London to “see the Lions washed.” Wish I could pull that one off, lol.

Mount Edgecumbe, a dormant volcano in Alaska, was the setting of an elaborate April Fools trick in 1974. Oliver “Porky” Bickar ignited a hundred old tires in the crater. I can just imagine the billowing black smoke convincing residents of nearby Sitka that it was erupting—well, unless they saw the 50-foot letters “APRIL FOOL” spray-painted around the rim.

Television and radio abound with pranks and practical jokes. In 1938, The War of the Worlds radio drama with Orson Welles sent folks into a panic. It happened on Halloween, but it could have been April Fools. The BBC broadcast a film in 1957 showing Swiss farmers picking freshly grown spaghetti, only to be flooded with viewer requests on where they could buy their own spaghetti plants.

Netflix plays April Fools with hilarious new genres like "Movies Starring Estelle Getty and Some Other Guy" (one film) and "Movies That Are in English, But Still Require Subtitles" (two films). And who can forget those scintillating Netflix Originals like Sizzling Bacon (twenty minutes of bacon, frying)?

The press isn’t left out on April first. In 1996, Taco Bell announced in a full-page ad that they’d purchased the Liberty Bell and renamed it the Taco Liberty Bell. Getting in on the joke, the White House press secretary agreed the sale had been made and the Lincoln Memorial had also been sold to become the Lincoln Mercury Memorial.

Are these historical April Fools for real? Only Wikipedia knows for sure. 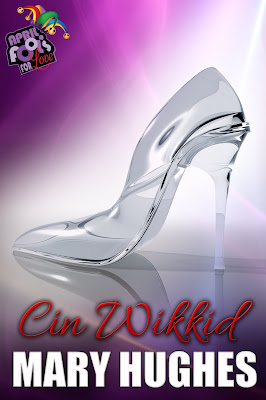 Cinderella hungers to escape from under Widow Wikkid's grinding thumb. But to snare a plum job at Prince Industries, Cin desperately needs her degree, and she can't wrap her mind around tax accounting.

Then scarred but sexy Rafe Montoya ignites her imagination with his brilliant tutoring—and, as they work together in his cozy apartment, he sets her body on fire. So why is he pushing her to attend Gideon Prince's marriage-mart ball?

Rafe is really Gideon Prince, head of Prince Industries. He must name his bride by his April first birthday or suffer the loss of his family fortune. Rumors say he's still single because women love his money and looks, not him. Is he lonely or just another duplicitous tycoon?

Hopefuls flock to Prince's birthday ball, but only one will emerge triumphant. Only the woman who's kind, wise, and generous will win his heart. Is it Cin, or will her stepmother, as she always does, snatch the prize for her own daughters?
And on the night of the ball, when Cin discovers Rafe’s true identity, can she even accept his final test?

Warning: Rags-to-riches fairytale meets the texting generation. Stepsisters who are a blush-brush shy of a full makeup set, and a ball gown built like a tank. Contains material intended for mature audiences. Reader discretion advised.

Excerpt:
Rafe watched her over the rim of his coffee mug, cobalt eyes twinkling. He knew exactly how badly she’d needed that massage. Exactly how much she’d enjoyed it.
He’d known…even though she hadn’t.

Her heart beat faster. He knew things about her, important things, that even she hadn’t known.

Rafe wasn’t simply the nice boy-next-door tutor she’d thought of him as. He wasn’t well-meaning but bumbling…

A little thrill sang through her. She immediately squelched it. His observance would be wonderful if they became a couple. But it also meant that if she ever got on his bad side, he’d know exactly where to stab to hurt her the most.

Before any of that, if they were ever to have the possibility of a real relationship, she had to come clean about the mock-hearing. “Can I confess why I wanted to meet now?”

Hesitantly, she told him. But as she explained, he didn’t seem to be hurt or angry or any of the things she thought he’d be.

Instead, he almost seemed to expect what she would say.

Somewhat confused, but with greater confidence, she ended with, “Is that something you can teach me?”

“Ye-es. Probably.” He frowned, thoughtfully. “How long do we have?”

“Until the beginning of April.”

“Then definitely yes. Though, it will take some pretty intense work one-on-one.” One black brow raised, a challenge. “Are you up for it?”

“I’m not afraid of hard work. Are you up for it?” Daringly, she raised both brows in return challenge.

The right corner of his mouth went up, on the scarred side, crinkling his skin and giving his grin a rakish, devil-may-care look. “Hours of intense work, one-on-one, with you? Oh, yeah. I’m up for it.”

The way he purred “up for it” implied things beyond study. Physical things. Cin’s stomach swooped and her heart pattered rapidly in response.

Then his eyes dropped to her mouth and heated.

She trembled, her heart pounding, her breath sawing in and out, on the cusp of bright truth. Her stepsiblings’ hatred had taught her to cover herself in bad makeup and baggy clothes and work, the contemporary version of sacks and ashes. But Rafe, looking at her like that…as if he not only was attracted to her but was on fire…God. She wanted to tear off her rags and shine.

About Mary Hughes:
As a girl, Mary Hughes spun romantic, happily-ever-after stories to get to sleep. A husband, family, two degrees and a blackbelt later, she's delighted to spin them for readers.
She's lived with love and loss, in bright times and dark, and learned we can all use a break from reality every now and then.

Giveaway ends 11:59pm EST April 2nd. Please supply your email in the post. You may use spaces or full text for security. (ex. jsmith at gmail dot com) If you do not wish to supply your email, or have trouble posting, please email maureen@JustContemporaryRomance.com with a subject title of JCR GIVEAWAY to be entered in the current giveaway.
Posted by Maureen A. Miller at 12:30 AM