An Interview with Jessi Tucker, heroine of To Win Her Heart


1. What is your name and what do you do?
I’m Jessi Tucker and, along with my singing partner, Spencer Pierce, I’m half of country music’s sweetheart duo.
2. Who is your best friend?
My career has been my focus since I was fifteen, which didn’t leave a lot of time for friendships, until a few years ago when my cousin Tuck married CC. She and her cousin, Kris, are now as close as sisters. I don’t know what I’d do without them 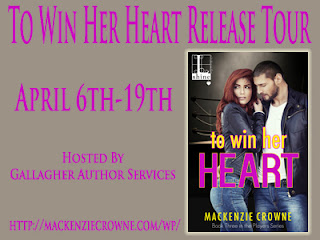 3. If you have a family, how do you get along with them?
Oh, man. Don’t get me started. I love them. Really, I do, but they have this thing about my security. Someone is always watching me. To keep me safe from the crazies who follow public figures, gut geez. How pitiful is it I look forward to going to the bathroom just to be alone for a few minutes?
4. Do you have a tattoo?
No, but Max does. It’s this curly tribal thing that starts at his neck and rides one shoulder and pec. God, it’s sexy.
5. When you’re angry, what do you do?
If you ask my cousin and manager, Tim, he’ll tell you I don’t get angry enough. Well, until recently. He got his wish when I decided I’d had enough of the constant surveillance and hatched a plan to gain my independence.
6. If you had to make me a meal right now, what would it be?
Hmmm. About that. Me and a kitchen are a bad combination. I recently attempted to make a meal of spaghetti for Max, because the way to a man’s heart…blah blah blah. Epic fail. Can you say where’s the fire extinguisher?
7. What’s the one thing you’re afraid of losing?
Myself. When my mom was murdered, I walked onto the stage to please my father by fulfilling her dream, but it’s not what I wanted. Ten years later, I’m afraid if I don’t make some changes soon, I’m going to disappear.
8. What makes you laugh out loud?
I know I made it sound like my family is a pain in the butt, but they’re a rowdy bunch. They make me laugh, even when they’re annoying the hell out of me.
9. Has anyone broken your heart?
Max has, by denying the love I have for him because he doesn’t believe he’s good enough.
10. What’s the one thing you want out of life that you don’t think you can have?
Max again, and for the same reason. But I’m not giving up on him. I can’t. He’s the only man I’ve ever loved. 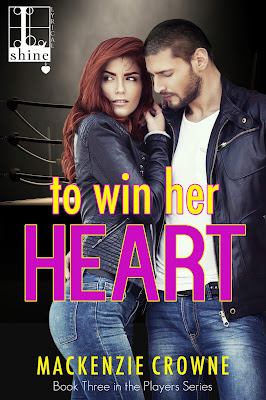 TO WIN HER HEART

In order to protect her, they’ll both have to let their guards down…

Country music’s It Girl Jessi Tucker is fed up with her family’s stifling security measures. The threat of a dangerous stalker has gotten the men in her life—including her football star cousin, Tuck Tucker—monitoring her every move. To get the freedom she yearns for, Jessi hatches a plan to recruit Max Grayson, Tuck’s sexy brawler best friend, to play the role of her new boyfriend. But if her scheme works, will she be forced to hide her true romantic feelings for the sake of her independence? Or will she finally steal the heart of her dream man?

Max has been pining for Jessi for years and would do anything to protect her, but a professional cage fighter with too many skeletons in his closet has no business being with one of America’s sweethearts. Yet while Max does his best to keep Jessi at arm’s length, the Tucker family persuades him to accept her offer.
Max believes he can keep Jessi safe from danger, but can he shelter her from his own dark secrets, the media’s unforgiving spotlight—and a mutual desire that’s harder to resist each day?

Wife, mother and really young grandmother, Mackenzie lives with her high school sweet heart husband, a neurotic Pomeranian, and a blind cat. She calls Phoenix home because the southwest feeds her soul. Though her friends claim she’s a princess, she disagrees. After all, one can’t raise two rambunctious boys to wonderful men without getting a little dirt under their nails. A lover of the romance genre, her resolve to share her stories with others was sharpened by a bout with breast cancer. Today she is an award-winning author and eight year survivor, living the dream. Her friends call her Mac. She hopes you will, too. Connect with her at http://mackenziecrowne.com, https://www.facebook.com/MackenzieCrowne and https://twitter.com/MacCrowne.