Congratulations to "Mandy", the winner in Jennifer's giveaway. Thank you to all who participated!

Last summer, I was looking for a good book to read and shuffling through my Kindle I found a road trip romance of sorts. The book was Ride With Me by Ruthie Knox.  Besides the fantastic writing and complex characters of the book, what I liked most about it was the idea of forcing two characters together whether they wanted to be or not.
This is where the road trip, a classic romance trope, comes in handy. 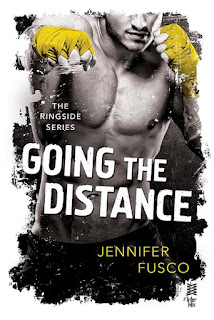 The hero, Mike Perez, of GOING THE DISTANCE is a complicated guy. He’s got a lot of demons and a lot of secrets. He holds them close to his heart therefore making it difficult for anyone to break through his protective shell.  That’s where our heroine, Ava, comes in. She’s a tough, gutsy sports reporter.  She knows Mike has a story and she’s determined to uncover it.
In a normal situation, these two people wouldn’t have spoken two words to each other. So, the only way to make them see that they were perfect for each other was to put them in a car together for thousands of miles. It’s also the perfect vehicle (pardon the pun) to get two characters talking, really talking, because how else are they going to let their guard down.
When Mike gets booked for a fight in New York’s Madison Square Garden, Ava is quick to volunteer for a ride along. Sharing the drive from Nevada to New York, Ava’s interest turns physical. But as their relationship heats up and Ava unearths his past, will she expose Michael’s darkness or succumb to the passions of a relationship she's only ever read about? 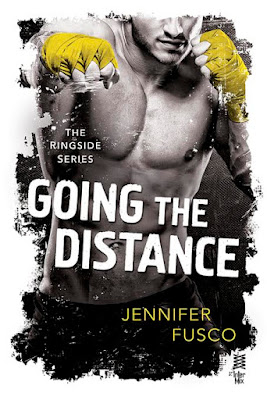 
A dedicated fighter, Middleweight Michael Perez is willing to do whatever it takes to reach the top, and with his next fight scheduled at Madison Square Garden he's almost there. A self-proclaimed control freak, he plans to drive himself cross country to the fight. But when his manager insists a sports reporter tag along, thinking it will be good for public relations, Michael finds himself under the watchful eye of Ava Phillips.
Ava Phillips has made a career out of exposing the underbelly of professional sports. Her instincts tell her that sexy, moody Michael Perez’s squeaky clean image is a cover for something more intriguing. Sharing the drive from Nevada to New York, Ava’s interest turns physical. But as their relationship heats up and Ava unearths his past, will she expose Michael’s darkness or succumb to the passions of a relationship she's only ever read about?
Amazon | Barnes and Noble | Kobo

Giveaway:
I’m giving away one copy of GOING THE DISTANCE to a commenter below who tells me about their last road trip. Where did you go? What did you see?


Giveaway ends 11:59pm EST March 21st. Please supply your email in the post. You may use spaces or full text for security. (ex. jsmith at gmail dot com) If you do not wish to supply your email, or have trouble posting, please email maureen@JustContemporaryRomance.com with a subject title of JCR GIVEAWAY to be entered in the current giveaway.
Posted by Maureen A. Miller at 12:30 AM