Congratulations to "Lynn B.", the winner in Daire's giveaway. Thank you to all who participated!

The biggest obstacle faced by the characters in Sweet Seduction is overcoming a sense of not feeling worthy of love, which I think is a pretty relatable emotion. For the heroine, Daisy, she has always felt unloved by her mother and needed to resolve that relationship in order to move on. For Jamie, he felt responsible for his sister’s death and didn’t feel happiness was possible for him. When faced with the possibility of a meaningful and loving relationship, Jamie and Daisy sabotage things as a form of self-preservation, protecting themselves from repeating whatever injury they suffered in their past.

So, the lesson that Jamie and Daisy learn in the book is that in order to be loved, they have to first forgive themselves, and/or the person who hurt them. In addition, they must be willing to be vulnerable, which is incredibly scary when your psyche warns you that you’ll only be hurt again. However, the characters learn that a willingness to be hurt is the only way to grow and in the end it is so worth it because being with the person you love--cooking together, christening countertops together--is the best thing ever! 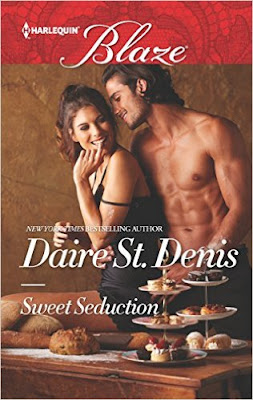 All it takes is one sweet taste…

Daisy Sinclair knows how to make a guy moan with raw pleasure. She should, as owner of the best damn bakery in Chicago. Her cinnamon buns are borderline orgasmic! Of course, standing in front of the city's biggest (and sexy-as-hell) food critic in her skivvies isn't the most professional first impression. Especially when he has a wicked glint in his eye…

Jamie Forsythe isn't exactly a food critic; his twin brother is. One look at Daisy's mouthwatering curves, and Jamie knows only that he wants to have his cake and Daisy, too. Attraction mixed with deception is a recipe for disaster—the naughtiest, hottest kind imaginable. And there's no way Jamie can resist being sent to bed…with Daisy as dessert!

Excerpt:
Daisy Sinclair's phone came alive on her desk, jumping and jiving to "Candy" by Foxy Brown. She'd been so absorbed in entering information into Accounts Payable that the sudden noise startled her silly.

"What's up?" Daisy said aloud, picking up the device and checking the message on the screen. It was the reminder she'd set four weeks ago. Four hellish weeks ago. And now, four weeks later, the reminder was telling her it was time. Time to face the music. Time to see whether the torture she'd put herself through had all been worth it.

After nudging the scale out from beneath her desk, Daisy tiptoed to her office door and shut it. Then she gave herself a once-over in the full-length mirror on the back of the door. There was a streak of flour on her cheek that she rubbed off with the back of her hand before her gaze dropped. Hmm. The apron she wore made her look boxy.

She untied it and slipped it off.

Unfortunately, the well-worn jeans and loose cotton blouse weren't much better, so she stripped those off, too, dropping them in a pile by the door.

There. Now she could see what was what. She'd avoided the full-length mirror for four weeks for just this purpose.

The celebrity gala that her mother had managed to get her a ticket to was on Saturday, only five days away, and she was determined to look her best in her fabulous new red dress—hence the month of hell she'd endured. Daisy swiv-eled in front of the mirror, eyes narrowed, searching her figure for the changes that had to be there. Generous hips.

She turned to check out her butt. Round ass.

Standing in profile, she cupped a hand under her breasts. Biggish boobs.

Healthy. Nana Sin's voice was so clear it was as if her grandmother was standing right beside her, smiling, holding a tray of freshly baked caramel-nut cookies.

Stubborn cow was the endearment Daisy's ex-jerk-of-a-husband had for her. But then, she'd had a few choice names for him, too, over the course of their short marriage. The divorce would have been done with by now if it wasn't for Nana Sin's bakery.

Ahh, the bakery. Daisy closed her eyes and took a deep breath. The cinnamon buns must be fresh out of the oven because the aroma of cinnamon with an overtone of raisins, sweet and sticky with brown-sugar yumminess, was heavy in the air. Heaven. This had to be what Heaven smelled like.

Okay, once this business with the scale was over, she was going to reward herself with a bun. She deserved it.

Giveaway:
Daire will be giving away a copy of SWEET SEDUCTION to one lucky person leaving a comment or email entry.

About the Author:
USA Today bestselling author Janice Maynard knew she loved books and writing by the time she was eight years old. But it took multiple rejections and many years of trying before she sold her first three novels. After teaching kindergarten and second grade for a number of years, Janice took a leap of faith and quit her day job. Since then she has written and sold over thirty-five books and novellas.

Giveaway ends 11:59pm EST March 15th. Please supply your email in the post. You may use spaces or full text for security. (ex. jsmith at gmail dot com) If you do not wish to supply your email, or have trouble posting, please email maureen@JustContemporaryRomance.com with a subject title of JCR GIVEAWAY to be entered in the current giveaway. US residents only.
Posted by Maureen A. Miller at 12:30 AM