You And Only You


Welcome to Book One in the Blessings, Georgia series of Southern contemporary romance from New York Times and USA Today bestselling author Sharon Sala. With the support of her handsome, unassuming friend Mike Dalton, LilyAnne Bronte is finally ready to put the past in the past. 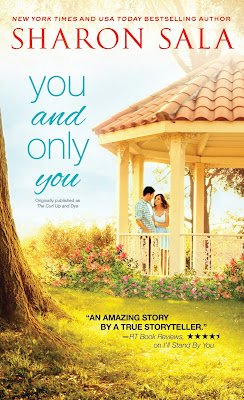 YOU AND ONLY YOU

Mike Dalton has secretly loved LilyAnn Bronte since they were all children together in the small town of Blessings, Georgia. But one fateful day T.J. Lachlan roars into town and starts showering LilyAnn with his charm, and Mike feels his dream of them being more than friends slipping away.

To find the love you missed

LilyAnn, as anyone in Blessings will tell you, let herself go after her fiancée was killed in Iraq. The attention of the handsome new guy shocks her into a revelation: she’s ready to live again, and maybe the best is yet to come. The thing is, everybody in Blessings is sure it’s Mike and LilyAnn who belong together—and they’re willing to do whatever it takes to make LilyAnn realize the love of her life has been by her side all along.

(Originally published as The Curl Up and Dye.)

The Sunday morning ritual for most of Blessings was about the same—­breakfast, then church, or early church, then brunch.

It all depended on the denomination. LilyAnn was a member of the Wesley United Methodist Church, and there was never a question of if she was going to church. It was simply a question of which service.

When she was little, her parents had taken her to the last one. Sunday school always began at 10:30 a.m. and preaching afterward at 11:15 a.m., and she’d been dressed for display, like the little doll she was.

Now she dressed to hide, and cooler weather was her friend. Jackets and coats, long-­sleeved shirts and slacks hid a multitude of sins, which was good when you went to a church where people preached against them.

LilyAnn eyed the sky as she carried the trash out to the bin behind the house. It was nearly half a mile to church, too far to walk in heels. The day was cold but clear, and she could take a walk this afternoon. Right now, she needed to hurry and get out of her sweatshirt and jeans or she was going to be late for church.

She ran back inside, shutting out the cold as the door slammed behind her, and was on her way down the hall when the phone began to ring. She lengthened her stride to get to the bedroom to answer.

It was the slight tremor in his voice that made her heart kick out of rhythm.

“I’m on my way,” she said, and hung up the phone. By the time she got to the door, she was running.

She flew across her front yard and up his driveway, then around to the back door because she knew it would be unlocked.

“I’m here!” she yelled, as she ran in through the kitchen. “Where are you?”

She’d spent half her life in this house playing with Mike when they were little and knew exactly where to go. But the moment she started down the hall and saw the blood, panic hastened her steps. The trail went all the way across the hardwood floor of his bedroom and into the bathroom. The door was ajar.

Mike was leaning over the bathroom sink, wearing a pair of blue jeans and nothing else. Blood was pouring from a cut on his forehead, and there were smaller cuts and scratches on his torso. The Plexiglas shower door was in shards.

“I got dizzy. Slipped. Tried to get dressed, and this is as far as I got. I’m too dizzy to drive myself to the ER. Can you—­”

“Sit down,” she said, and slammed the lid shut on the commode, then grabbed a hand towel, folded it into a large pad, and pressed it against the cut. “Hold this,” she said, and flew back into his bedroom, snatching a button-­up shirt from the closet and a pair of house shoes from beside his bed.

Within a couple of minutes, she had him dressed and on his way down the hall, but he was leaning on her with every step.

“Where are your car keys?” she asked.

He pointed to the dish by the front door.

She grabbed them on the way out, pulling the door shut as they went. Her purse and driver’s license were at her house, and that was just too damned bad. If they got stopped on the way to the ER for speeding, the police officer could kiss her fat ass.

By the time she got Mike in the car, all the color had washed from his face and she was getting scared.

“How long have you been bleeding?” she asked, as she backed the car down the driveway and took off, leaving rubber on the street as she accelerated.

“I don’t know,” he mumbled, and then passed out.


Sharon Sala, who has also written under the name Dinah McCall, has 85-plus books in print, published in four different genres—Romance, Young Adult, Western, and Women’s Fiction, and her Young Adult books have been optioned for film. She has been named a RITA finalist seven times by Romance Writers of America, and in 2011 they named her the recipient of the Nora Roberts Lifetime Achievement Award. Her books are New York Times, USA Today, Publishers Weekly bestsellers and published in many different languages. She lives in Oklahoma, the state where she was born.