One Texas Cowboy Too Many

This March the third book in Carolyn Brown's beloved Burnt Boot, Texas series comes out! To celebrate the release of One Texas Cowboy Too Many we're giving away signed bookplates from Carolyn and one chocolate gift basket filled with cowboy themed treats and the complete Burnt, Boot Texas series.

To enter, all readers have to do is fill out this form here with their name, mailing address, email address and preorder confirmation number to receive their signed bookplate.* All entries will automatically be entered to win a chocolate gift basket from premiere chocolatier Le Chocolat as well as a complete set of the Burnt Boot, Texas series. The winner will be selected from Sourcebooks on Tuesday, March 1st. 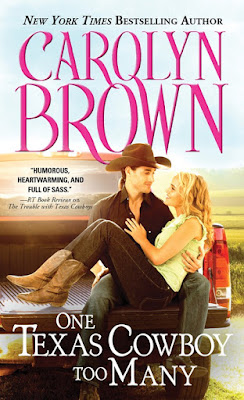 One Texas Cowboy Too Many
Book 3: Burnt Boot Series

She’s Got Too Many Cowboys On Her Hands

Leah Brennan has always been the good girl of the Brennan family, groomed to become the matriarch of the clan. When a dark-eyed, tattooed, ponytailed bad boy saunters into her life, Leah knows he’s off-limits—but his mesmerizing gaze makes her forget everything she used to think was important. As town-wide tension rises, Leah wonders if love really can conquer all…

And the Whole Town’s Taking Sides


When Rhett O’Donnell roars into Burnt Boot on a hot July evening, the first thing he sees is a beautiful blonde. She puts a little extra giddy-up in his heartbeat, but when Rhett’s desire throws him into the middle of a love triangle and a hundred-year-old feud, he realizes that winning his cowgirl’s heart will be a lot more complicated than he thought.

An Excerpt:
The Burnt Boot Bar and Grill was not exactly what Rhett expected. The parking lot was gravel, or at least it had been at one time. Now it was thinly distributed gravel on top of dirt with only one streetlamp to illuminate the whole place. The building was weathered wood that didn’t look as if it had ever seen a drop of paint applied. Hell, it might have even been petrified, as old as that sign swinging above the entrance. The roof was rusty sheet metal, and the only window in the place was the one in the door.

“Not what you thought it would be?” Sawyer asked when Rhett got out of his truck.

“Looks more like a barn than a bar,” he said.

“The inside is better—air-conditioning, jukebox, and even paint on the walls.” Jill laughed.
“I like the air-conditioned part best of all.” Rhett followed them inside.

The bar itself was only eight stools long and had a small area for grilling burgers and making fries behind it. There were no pool tables, which surprised Rhett. But not as much as the shelves holding loaves of bread, hot dog and hamburger buns, and a small assortment of prepackaged pastries, or the refrigerated section beside that, with milk, beer, wine, and soda pop behind sliding glass doors. The other end of the long, rectangular room sported a jukebox, a few mismatched tables with chairs around them, and a small area for dancing.

“After the store closes in the evening, folks can get milk and bread or beer in here,” Sawyer answered the unasked question.

“And I thought Comfort was a small town. I’m not sure this qualifies as a town.” Rhett chuckled.

Sawyer clamped a hand on his shoulder. “You’ll get used to it. Besides, you know what Grandpa says. To be a town, the place has to have a church and a place to buy beer or get a shot of whiskey. So by the O’Donnell qualifications, Burnt Boot passes the test.”

At nine o’clock, he’d filled a few pitchers of beer for folks who’d drifted in and out, and Sawyer had shown him the process of making burger baskets. Sparks danced around Jill and Sawyer every time they brushed against each other. It damn sure didn’t take a rocket scientist to know that their honeymoon wasn’t over.

Two lonesome, old cowboys sat in a back corner drinking beer and telling tall tales. The jukebox had gone quiet and Rhett had wiped down the bar so often that it was shiny clean. If every night was like that, he’d have to bring some rope to make a bridle or something to keep himself from dying of complete boredom.

“Why don’t y’all go on home? I can handle it for the next couple of hours,” Rhett said.
“If you’re sure, we won’t argue.” Jill removed her apron and hung it on a nail.

Sawyer didn’t waste a bit of time hanging his apron right beside hers. “We damn sure won’t. Can’t remember the last time we got to go home before midnight. Sweep up and put the chairs on the tables. We don’t do mopping unless there’s major spills. Here’s the keys. Be sure to turn off the grill and the lights.”

“Will do.” Rhett rolled the sleeves of his white T-shirt and wiped down the bar one more time.

Jill and Sawyer were gone less than five minutes when the door flew open and suddenly the bar was crowded to capacity. Someone plugged money into the jukebox, and in seconds it was going full blast, playing “Boys ’Round Here” by Blake Shelton. Folks wasted no time getting out onto the dance floor and making a long line to do a line dance. The noise level went from zero to one hundred so quick that it took a while for Rhett’s ears to adjust.

“Hey, Rhett, we need three pitchers of beer and about six red cups,” Kinsey yelled from the end of the bar.

He quickly filled the pitchers, set them on the bar, and stacked up six plastic cups. Kinsey handed him a bill and he made change.

“And when you finish that, I need two longneck bottles of Coors,” Betsy said from the other end of the bar.

It kept him hopping, keeping the beer orders filled, the money straight, and making a few pitchers of margaritas. Then there was a lull, and there she was, sitting on a bar stool, her light green eyes watching him. His heart threw in an extra beat and his chest tightened.
“Well, hello, did you just fall from heaven?” he asked.

“I’ll have a double shot of Jack on the rocks, so the answer is no. I don’t think angels drink whiskey, but it is a fine line,” she answered.

“So you are a Tennessee whiskey lady?” he asked.

Brown presently writes both women's fiction and cowboy romance. She has also written historical single title, historical series, contemporary single title and contemporary series. She lives in southern Oklahoma with her husband, a former English teacher, who is not allowed to read her books until they are published. They have three children and enough grandchildren to keep them young. For a complete listing of her books (series in order) check out her website at www.carolynlbrown.com
a Rafflecopter giveaway
Posted by Maureen A. Miller at 12:30 AM