How to Un-cliché a Valentine’s Romance

Hi JCR Friends! It’s so fun to be here today—I love this spot on the ‘net!

It’s a hard truth that an author must learn to be flexible. A reader of romance might not think that’s the case. Like all genre fiction (including sci fi, mystery, fantasy) romance has its beloved tropes and formulas, so it might seem as if writing a story that leads to a Happily Ever After would be fairly straightforward. Not so.

There are the unruly characters throwing us for loops and changing our best laid plans. Our own brains change direction—sometimes painfully.  And there are the deadline changes that—oh by the way—have your book releasing just before the biggest romance holiday in the world.

“The Bride Wore Starlight,” my brand new book from Avon Impulse, would have been easy to turn into a Valentine’s story—after all, there are weddings, and there is true love! In truth, however, I tried very hard avoid the clichés surrounding the holiday and still include a taste of romance’s favorite day. I did it by choosing one big cliché, and then changing all the details.

The heroine of “Starlight” is Joely Crockett, an unusual heroine for sure, because she starts out the book recovering from a serious injury, and right away we learn that even though she’s literally spent her life as a beauty queen, she now bears a long, disfiguring scar on her face and will never walk normally again. Her beauty queen days are definitely over.

Joely’s hero is the tough-talking but mushy-hearted, ex-rodeo champion Alec Morrissey. He’s an unusual leading man because, just like Joely, he is permanently injured and wears a prosthetic leg.

You can see these two definitely don’t make the quintessential Valentine’s fantasy pair. To top it off, neither of them really wants love. One because she doesn’t believe she’s loveable, the other because he has wounds from his years in Iraq that he won’t admit aren’t healed.

The theme of this book quickly became how do you find true inner beauty and love for who you really are in a world where beauty and perfection and winning is so highly prized? I loved that this is kind of the opposite theme from hearts, flowers, chocolates, and perfect love.  Alec and Joely definitely give St. Valentine a run for his money!

They absolutely don’t take the starry-eyed route to love despite the book’s title. Fortunately, they both have stubborn tenacity, a grudging respect for each other that only grows stronger the longer they’re together, and a need for healing that only the other can give. There aren’t as many hearts and flowers in this story as there are bunking broncs and giant Irish Wolfhounds—but in the end, the power of all the things these two have in common, and of Valentine’s Day itself, wins out.

I also promised there was one big Valentine’s Cliché and I saved it to the end of the book. You can probably guess, but if not be warned ***Spoiler Alert*** there is a big ol’ Valentine’s  Wedding! But lest you think there’s anything cliché about it—you’ll have to check out the story to see how far from true that is. 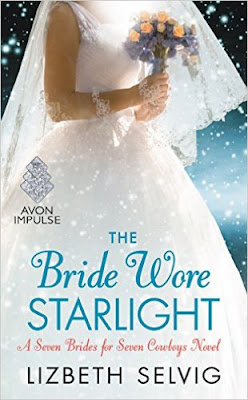 Once comfortable on stage in front of thousands, Joely Crockett is now mortified at the thought of walking—or rolling—down the aisle at her sisters’ wedding. Scarred and wheelchair-bound, the former beauty queen has lost more than the ability to walk—she’s lost her fire. But when one handsome, arrogant guest accuses her of milking her injuries and ignites her ire, Joely finally starts to feel truly alive again, and soon it’s impossible for her to resist her heart’s desire.

As two healing souls begin to fall in love under the Wyoming stars, they must discover if they are willing to give in to the tragedies of life or fight for a future together.

Alec Morrissey knows a little something about loss. A famous rodeo cowboy before he was injured in Iraq, he’s managed to create something of a normal life, even if it’s not the one he always imagined. Encountering stunning but damaged Joely, he sees a kindred spirit who can learn from his mistakes.


ABOUT THE AUTHOR:
Lizbeth Selvig lives in Minnesota with her best friend (aka her husband), and a gray Arabian gelding. After working as a newspaper journalist and magazine editor, and raising an equine veterinarian daughter and a talented musician son, she won RWA’s prestigious Golden Heart® Contest in 2010 with her contemporary romance The Rancher and the Rock Star. In her spare time, she loves to hike, quilt, read, horseback ride, and spend time with her new granddaughter. She also has four-legged grandchildren—more than twenty—including a wallaby, two alpacas, a donkey, a pig, a sugar glider, and many dogs, cats, and horses (pics of all appear on her website www.lizbethselvig.com). She loves connecting with readers—contact her any time!
Posted by Maureen A. Miller at 12:30 AM