First love and a second chance...

Congratulations to "jcp", the winner in Tamara's giveaway. Thank you to all participated.


Probably because I'm a journalist in my day job, I tend to get my ideas for fiction from real life. Unlike my first novel, HOT SHADE, I didn't draw from a news story. The idea for INTO THE HEAT came one sunny Florida November day when I was hanging out with my best friend, Heather.

We were walking on the beach, pre-Thanksgiving, musing about how we should be cooking instead of wandering around. This was on Treasure Island, of the Gulf Coast's most beautiful beaches. The sand is like sugar, it's so fine, and the water that day was electric blue. A perfect day. We came upon a sand sculpture contest, but this wasn't a children's sandcastle competition. This was an artistic annual competition with huge, intricate sculptures. All of them were gorgeous and took days to create.

A handsome man was working on one sculpture, looking very intent. He was wearing shorts and a T-shirt and he was dirty. He knelt in the sand before an intense-looking sculpture of a half-buried skeleton, and I turned to my best friend and said, this would make a great scene in a book. Now, my friend and I have known each other since we were kids, and we often tend to let our imaginations wander. She's my best sounding board for my books, and on that day, we plotted a story that eventually became INTO THE HEAT. 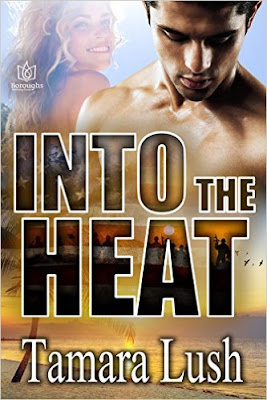 Tatted, war-weary veteran Leo Villeneuve found and lost love at eighteen, so his return to Palmira Island, Florida, is not only a quest to make right his wrongs, but a chance to recover the one thing he's always truly wanted: Jessica Clarke.

After he was forced to leave Jessica behind, Leo's next years became a hell of his own making, with a tour in Afghanistan with the Marines and an ocean of regret. Things have only gotten worse. Scarred and on the run, but trying desperately to make things right, there is only one place he can go.

Palmira Island is Jessica's home. The beauty of Florida's sand and surf are a perfect backdrop for her family-run bed-and-breakfast, a business she's sworn to keep up after the death of her mother. And perhaps the sun is rising after the dark night of the past year. Certainly it's getting hotter. She spots a man on the beach and he's tatted, muscular...and the boy who took her virginity so many years before. Why has he returned, and are his scars anything like her own? Secrets abound, but in weather like this everything must be revealed.

Together, bared and vulnerable, Leo and Jess might just get to that hot, sweet place that reconciles the past with a fire that will burn forever.

Waving at a lifeguard in the distance, Jessica ducked under a rope. Scanning the piles of sand, she spotted little flags with numbers next to each mound. Hers was station number four, and she ticked off the numbers as her legs ate up the distance. There was station seven.... That sculptor hadn’t started yet. Neither had the person assigned to pile six.

Her thoughts skidded to a halt as she approached station five. There was a guy kneeling in front of the mound, and the sight of his bare muscular back, broad at the shoulders and tapered at the waist, made her grin a little. She’d sworn off men since breaking up with her jerk of an ex, but that didn’t prevent her from admiring a beautiful thing from afar.

Hm. He was right next to where she’d be sculpting.

She moved lightly, never taking her eyes off the guy. His skin was a warm bronze hue and his muscular thighs had sunk into the sand. He wore only blue surf shorts, and while she had grown up on the beach, it was rare that such a stunning specimen of manhood graced the sleepy Palmira shores. If only she could remain invisible while sculpting her creation, free to admire this guy’s beauty without having to make small talk, then life would be perfect.

She stopped swinging her bucket, so the tools wouldn’t make a sound.

A sketchbook sat in front of the guy on the sand, and he held a pencil in one large, masculine hand, drawing with broad strokes. Jessica took a few more steps toward her sand pile, which also conveniently allowed her to get a better look at the guy’s profile. What she saw turned her grin into an open-mouthed gape.

Leo Villeneuve? Inhaling a long, thin breath, she narrowed her eyes. Was it possible? Her first kiss.

She took off her sunglasses. Was it really him? Yep, it was. She could tell by the shape of his long, straight nose. And by the way his full lips pushed out slightly as he concentrated on the sketchbook. Those lips had kissed her, and the memory of all the places they’d touched— her neck, her nipples, in between her legs—made her shiver in the hot sun as if a single ice cube had been dropped down the back of her shirt.

“Jess, you’re my first. And I’m your first and I don’t want there ever to be anyone else.”

It made her unsteady to recall his lazy New Orleans accent and how he’d whispered honey- sweet promises and dirty declarations in her ear all while he did wicked things to her body. Things that she’d allowed no one to do in the five years since.

Leo and his father had vacationed on Palmira and stayed at the hotel for two weeks. Her mom and his dad were old friends. Old good friends, apparently, because the minute they arrived Jess’s mom had become less strict. Jess and Leo had taken to each other quickly, talking about music and video games and movies. He’d been surprised that she liked the Iron Man franchise as much as he did.

They’d kissed on Christmas Eve, the second night they knew each other, and spent the next several days doing everything but sex. She’d been wary but so excited. Leo never once tried to push her to do more than she wanted, and soon she was ready to try it all with him.

A week later, it happened. Leo slipped into her room after the adults were asleep. They’d lost their virginity to each other—awkwardly. She remembered how she hadn’t had an orgasm from sex like she had with his hands and tongue, but it was pretty wonderful nonetheless.

They’d kept having sex over the rest of the vacation, seemingly every moment they could steal away. Things had quickly stopped being awkward. More like explosive.

“All of you, from your head to your toes and everything in between, is mine. You’re mine, Jess. And I’m yours. Always will be, babe. Forever. I love you.”

Jessica straightened. It had been five years, and she’d heard nary a word. So, why the hell was her heart pounding like this? It was as if she had sprinted from her car to the beach. This was not what she wanted.

How unfair. She hadn’t felt this kind of adrenaline rush around any guy in years. Not with the couple of dudes she’d gone out with in college, and not with Jacob, her douche bag of an ex-boyfriend. No, there was only one man who’d ever made her feel this crazy, and he was the one who’d disappeared after what felt like a soul mate connection. And now he was kneeling on the beach in front of her, looking hotter than any man had a right to.
---
Praise for HOT SHADE, Tamara's debut novel:

"Fans of romantic suspense and New Adult will be enthralled by Lush's novel involving a journalist and a mysterious and handsome Italian, who's bound to take your breath away. The intrigue is heavy and there's many secrets embedded within the plot, prompting one to feverishly flip the pages to discover if there's an HEA or the ever-so-popular cliffhanger. Sizzling-hot sex scenes are an added bonus and provide a break from the heart-stopping action." - RT Book Reviews

"The hot, sexy and powerful attraction between these two characters is amazing, not to mention that Luca is HAWT and his sex appeal absolutely sizzles off the pages!!" - Tami Talbert, The Book Enthusiast
---

Giveaway:
Tamara will be doing a giveaway of one signed print copy of INTO THE HEAT to one person leaving a comment or an email entry.

Tamara  Bio:
During the day, Tamara Lush writes news as a journalist with The Associated Press. At night, she writes fictional romance tales about complicated, sexy men and the women who love them.

When Tamara isn’t reporting, writing or reading, she’s doing yoga, cooking for her Italian husband or chasing her dogs on a beach on Florida's Gulf Coast. She loves connecting with people on social media.


Giveaway ends 11:59pm EST Feb. 6th. Please supply your email in the post. You may use spaces or full text for security. (ex. jsmith at gmail dot com) If you do not wish to supply your email, or have trouble posting, please email maureen@JustContemporaryRomance.com with a subject title of JCR GIVEAWAY to be entered in the current giveaway.