I love the big brother’s best friend trope. A lot. There’s just something so delicious about watching these two characters finally get it together and hook up. They’ve known each other for years, they have a shared history, and usually a spark that’s been shouldering away for the longest time, just waiting for the chance to burst into flame. What’s not to love? 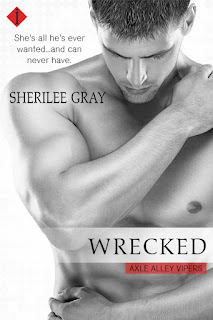 Piper, the heroine of my latest release WRECKED, has been in love with Cole since she was seventeen. But she’s not the only one who’s been keeping her true feelings hidden, and getting him to admit those feelings becomes her mission. She definitely has a lot of fun tempting her scarred hero.

Here’s an excerpt of the moment things begin to change between them:

Cole stared back, then stood suddenly and started toward her. In that moment his limp became more obvious, and she realized what his hesitation had been about. It had nothing to do with her. Why would it?
He was worried about dancing in front of all these people.

Sympathy churned inside her, but she kept her expression wiped clean. That was the last thing he wanted.

When he reached her, he extended his hand. The urge to tell him not to worry, that they could sit this one out was on the tip of her tongue. But she somehow knew her refusal would batter his damaged pride more than struggling through the dance with him would. So she took his outstretched hand and smiled up at him.

Despite their currently strained relationship, she’d do anything for Cole. He was a good man. A man who’d been through hell and back. He was also her brother’s best friend, someone she’d known most of her life. He needed her support, not her petty feelings of rejection—not when those feelings were hers alone. He hadn’t actually done anything. His biggest crime against her was not wanting her back.

As they walked out the song ended, changing to one with a slightly faster tempo. Piper inwardly winced as the other guys started spinning their partners around the floor.

She glanced up at Cole. Her tough ex-cop looked stricken, cheeks darkening.

With her only thought to ease his embarrassment, she stepped in close and wrapped her arms around his neck, so her body was flush with his, like they were a couple and this was the most natural thing in the world. He stiffened, staring down at her, gaze searching hers for several painful seconds.

She couldn’t read his expression, but for a split second she thought he might actually push her away.

But then he lifted his arms, sliding them around her waist, causing a delicious tingling sensation wherever he touched.

They didn’t speak, just held each other and began to sway to the music. 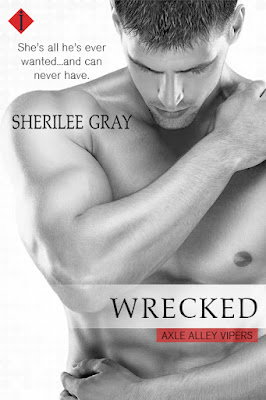 
Piper West is finally on her own, and it's time to get crazy. Except that her overprotective big bro has enlisted his ex-cop best friend to keep an eye on his baby sister. With every move monitored and reported back, Piper's life has gone from “going crazy” to “being driven crazy.” But a searing-hot kiss with her sexy and scarred watchdog is just the game-changer she needs…
Cole Black owes Piper's brother big-time, but there's nothing easy about his new assignment. Piper is all feisty sexiness and curves meant to tempt a man beyond reason, and Cole can't stop himself. Now he's caught up in a hunger like nothing he's ever known, and he can't get enough…


Even if Piper's the one girl he's not allowed to have.
Amazon | Kobo | iTunes
Author Bio:
Sherilee Gray writes sexy, edgy contemporary and paranormal romance. Stories full of heat and high emotion, following stubborn characters as they fight against the odds… and their happily ever after. She’s a kiwi girl and lives in beautiful NZ with her husband and their two children. When not writing or fueling her voracious book addiction, she can be found dreaming of far off places with a mug of tea in one hand and a bar of Cadburys Rocky Road chocolate in the other.
Author Website: http://www.sherileegray.com
Author Twitter: https://twitter.com/Sherilee_Gray
Author Facebook: https://www.facebook.com/AuthorSherileeGray/?ref=hl
Author Goodreads: https://www.goodreads.com/author/show/7762587.Sherilee_Gray
Newsletter: http://www.sherileegray.com/contactnewsletter.html