This is a question I get every time I tell people what I write—contemporary western romance set in Texas.
Anyone who knows me knows I was born, raised and have always lived in Pennsylvania. In fact, it’s a joke some of my western writer friends know that I’ve never been west of Ohio. Yet I love to read and write about the west. But why Texas? Colorado is a beautiful state as is Montana, the other common settings for us western romance writers. I chose to set most of my stories in Texas for one basic reason:  I’ve always been fascinated with the Lone Star State. Once upon a time when my first love was history, I devoured anything about the history of Texas.
Today, I’m not as much of a history buff. Instead, I’ve discovered contemporary westerns and fell in love with modern cowboys. So, it just seemed logical to me to set my stories in the state I’ve been studying for years.
I may not have ever been to Texas, but I’ve read so much about the areas where my books are set, that I feel I’ve lived there. And according to my readers who are from the great state of Texas, I’ve hit pretty darned close to the truth about the lifestyles, culture, the layout of the land and climate. 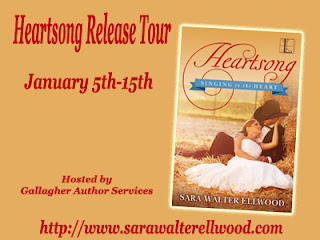 My fictional town of Bluebonnet Creek, the setting for my latest release Heartsong, is fashioned the town after the town of Blanket, which is located in Brown County in west-central Texas. The county seat of Brown County is Brownwood, 15 miles southwest of Blanket. The real town only has a population of about 400 people, which is also the population of my fictional Bluebonnet Creek. Like Blanket, my fictional town is surrounded by ranchland. The name for Blanket supposedly came from a group of pioneers who came across a group of Native Americans who’d been caught in a storm and afterward hung their blankets over the limbs of shrubs to dry. My fictional town Bluebonnet Creek got its name from a less dramatic historical account, rather it gets its name from the Texas state flower which grows in the area.
Is there a place you feel connected to, despite never actually visiting? 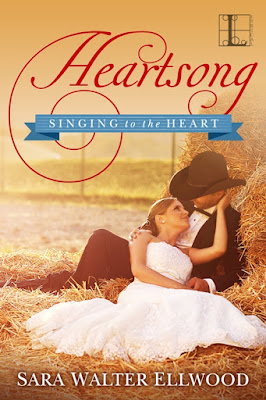 Heartsong
SINGING to the HEART Book 2

Gabriel McKenna is living the dream. A rising country music star he’s no stranger to fame, money, or beautiful women. Despite his bad boy image, he’s also got a heart of gold, and when his ten-year-old brother is orphaned, he wants to take him under his wing. But the judge on the case is less than impressed by Gabe’s reputation and awards custody to the grandfather Gabe knows firsthand is abusive.

Michaela Finn is no stranger to heartache. Years ago she was engaged to Gabe McKenna, but two days before their wedding he ran off to Nashville with a female talent scout. Now Gabe is back in her life with an insane plan. Marry him, so he can get custody of his younger brother. Michaela can’t bear to think of any child being hurt, but she’s just not sure her heart can carry a happy tune when Gabe is playing lead…

She drained her glass with a wince. “Damn, I’ve never liked champagne.” Michaela headed for the fridge. “Do you have any beer in here?”

He was more uncertain now than he’d been before he started thinking about this crazy idea. “Yeah. Lone Star. Get me one, too.” When she turned with the longneck bottles in hand, he chuckled. “A two hundred dollar bottle of fine French bubbly, but we’d rather drink Texas beer.”

“I’m a country girl, Gabe. You’ve always known that.” She handed him one of the
bottles. “I’ve actually been thinking the same thing--that if I were married the judge would’ve given me Jesse. But the only man I can think of is Cash Nelson.” She twisted the top off the beer and took a long draw. “But he would read too much into the agreement. I never considered you. Hell, the whole town knows I can’t even stand you. How is this gonna work?”

Gabe didn’t like the way his heart pinched at her words. He tossed the cap from his beer beside hers on the island top and took a drink. “We’ll have to convince them otherwise. We have a history and we’ve been working together”--he grinned as he remembered the custody hearing-- “or against each other for weeks now. Everyone knows there’s a fine line between love and hate.”

Bio:
Although Sara Walter Ellwood has long ago left the farm for the glamour of the big town, she draws on her experiences growing up on a small hobby farm in West Central Pennsylvania to write her contemporary westerns. She’s been married to her college sweetheart for over 20 years, and they have two teenagers and one very spoiled rescue cat named Penny. She longs to visit the places she writes about and jokes she’s a cowgirl at heart stuck in Pennsylvania suburbia. Sara Walter Ellwood is a multi-published and international Amazon bestselling author of the anthology set Cowboy Up. She also publishes paranormal romantic suspense under the pen name Cera duBois.

The other books in Singing to the Heart…
Heartstrings, Book 1 is now available and Heartland, Book 3 is available for pre-order
Heartstrings: Amazon
Heartland: Amazon

For other links and book information check out my website page.