Greetings! My name is MK Schiller and I’m thrilled to be at Just Contemporary Romance today. I write in many genres of romance including new adult, suspense and multicultural. What I love about writing multicultural romance isn’t showing the differences between cultures, but rather, highlighting how much we have in common with each other. With technology, I’m seeing the world grow smaller every day, which is a good thing. Instead of tolerating differences or worst ignoring them, we are embracing them. We need to spread the same message of diversity in the romance world.

Coming from India and visiting several times since then, I love writing Indian heroines. When I was younger, I only saw Indian women depicted as the docile housewife if at all. I’m excited to see barriers breaking on television and movies and yes…books!

In the new series Quantico, the lead is a kick-ass FBI agent of Indian heritage. In the Mindy Project, we see a successful doctor, who is really into fashion and men. It’s refreshing to see these multidimensional characters play out. 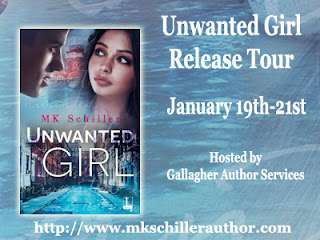 Unwanted Girl is about a girl from a small village in India. She falls for cynical, down and out, New York City author. These two have oceans of culture separating them, not to mention a ticking time-bomb since her student visa will expire in a few months. Both characters also have scarred pasts and carry heavy burdens that limit their views of a promising future. Yet, together, they learn to embrace life and experience true joy for the first time. Shyla, the heroine, wants to write a story, but she is no writer. Nick, although a seasoned successful writer, has lost his passion. The novel goes between the story they write and the one they are living. I’ve never attempted anything so outside the box, but then again, I’ve never been a fan of boxes.

What character on TV or the big screen do you think breaks barriers, cultural or otherwise?

UNWANTED GIRL
When a man loves a woman

Recovering addict Nick Dorsey finds solace in his regimented life. That is until he meets Shyla Metha.  Something about the shy Indian beauty who delivers take-out to his Greenwich Village loft inspires the reclusive writer. And when Shyla reveals her desire to write a book of her own, he agrees to help her. The tale of a young Indian girl growing up against a landscape of brutal choices isn’t Nick’s usual territory, but something about the story, and the beautiful storyteller, draws him in deep.

Shyla is drawn to Nick, but she never imagines falling for him. Like Nick, Shyla hails from a village, too…a rural village in India. They have nothing in common, yet he makes her feel alive for the first time in her life. She is not ready for their journey to end, but the plans she’s made cannot be broken…not even by him. Can they find a way to rewrite the next chapter?

This smoothly written cross-cultural romance, which initially appears uncomplicated, evolves into an in-depth study of strong emotions and underlying motivations. Schiller has a fine talent for describing cultural conflicts, and the characters are multifaceted and endearing. A truly unanticipated turn of events sends the riveting conclusion into overdrive, leaving readers breathless. - Publisher's Weekly
Excerpt –
“What are the other meanings for shucks?” she asked.
“It has many definitions. It can be a husk on the outer layer of corn. Or it can mean worthless.” She gave him a questioning look so he offered an example, dropping his voice slightly. “Like I don’t give a shucks about what we do as long as we do it together.” Her face flushed slightly, her smile turning suggestive. Encouraged, he dropped his voice a few octaves more. Test the water, Dorsey, but don’t fucking dive in! “Or it could mean to discard.”
“Discard?”
“As in peel off. For example, she shucked off her black T-shirt in a hurry.” His feet dipped into the complicated waters he’d avoided, waters that could heat up to boiling point if they kept creeping down this dangerous path.
“I see. So if I said, do you mind if we don’t shuck tonight, that would be a proper use?”
Nick opened his mouth to respond, to try to eat up the words already spilling out into the atmosphere, but she held up her hand, and her lips parted slightly. “But I hope we do shuck one day.”
Naughty girl.

Author Bio -
I am a hopeless romantic in a hopelessly pragmatic world. I have a full time life and two busy teenagers, but in the dark of night, I sit by the warm glow of my computer monitor, and attempt to conjure up passionate heartwarming stories with plenty of humor.

I started imagining stories in my head at a very young age. In fact, I got so good at it that friends asked me to create plots featuring them as the heroine and the object of their affection as the hero. We'd spend hours on the phone while I came up with a series of unrealistic, yet tender events, which led to a satisfying conclusion. You've heard of fan fiction... this was friend fiction.


Even with that, it took many years to realize I could produce an actual full-length book that readers would enjoy. I try to make my stories humorous, realistic, with flawed but redeeming characters. I hope you enjoy my stories and always find The Happily Ever After in every endeavor.