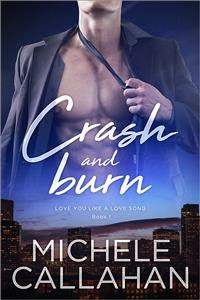 Every love story should have its own song...

A childhood promise has Chance Walker picking up a guitar once again. Sure, he's been busy growing up, finishing college, and even law school. He made a promise to his dying mother and he’s determined to keep it. While his guitar playing dreams were big when he was a kid, his skill is rusty and he hires Erin Michaelson to bring music back into his life. Not only is she incredibly talented, she's one of the sexiest women he’s ever met. It's hard to focus on correct finger position when her sweet scent threatens to drive him out of his mind.

Less than twenty-four hours after his first lesson he sees her again, but this time she’s on stage using another name and seducing an entire audience of men. He played the gentleman card once, and it got him nowhere. This time, all bets are off and he’ll do whatever it takes to keep her. A single, sizzling backstage kiss will change both of their lives forever, because Chance soon realizes that Erin is not just an itch, she’s an obsession he refuses to live without.

Erin Michaelson spends her days teaching guitar and her nights on stage as her sexy alter-ego, Eva James. Music is her dream, her passion. All she wants is to say goodbye to a lifetime of scraping by, working two jobs, and paying for past mistakes. When a major record label exec hears her band play, she gets her big break. But life can be a real bitch, and meeting Chance now is just bad timing.

Problem #1: The record label wants her to dump her band and move to L.A. Problem #2: She hadn’t counted on Chance Walker and the scorching heat of that first kiss. And last but not least is Problem #3: Is Chance falling in love with a dull guitar teacher, or is he really just lusting after the sexy Eva James?

Will success make all of Erin's dreams come true? Or will falling in love make them both crash and burn?

Crash and Burn is a scorching hot, contemporary, new adult romance of 58,000 words. The story contains explicit love scenes and is intended for an adult audience. Coming soon, fall in love with all the Walker brothers...

“I really want to kiss you, right now.”

“Then kiss me.” She stood up, right there next to his chair and waited.

He’d blurted out the thought because he wanted her to know how much he wanted her. But he’d never expected this. She was calling his bluff, daring him to stand up and make a spectacle of himself in the middle of a crowded restaurant.

He’d been on dozens of dates the last few years, and not one of them challenged him like she did.

Not one of those women had made him feel this alive.

He took his time, suddenly wanting every pair of eyes in the place glued to them to witness this kiss. He was staking his claim, right here, right now, and he wanted everyone to know she was his.

About the Author:
Michele Callahan (M L Callahan) is a science geek, super-nerd, romance fan, and avid reader who often makes emergency trips to the store for coffee, french vanilla creamer, or a Twix candy bar. The only thing Michele loves more than Star Wars is true love. (She knows the lyrics to the Ewok song - yes, she really does and has been known to break into song unexpectedly when cute, furry things walk by.) She's worked a variety of jobs and spent most of her work hours having private conversations with all of the characters in her head. After a few long years of daydreaming her way through work, she finally returned to her first true love…writing. Michele suffers from a dangerous case of sci-fi/fantasy fever and never turns down an opportunity to sit through a Star Wars, Star Trek, True Blood, LOTR or Matrix marathon. Her favorite things in books? Courageous characters (whom she loves to push to their limits), superpowers, true love, and freakish things that can’t be explained by modern science. Her mother, an English Lit teacher, inspired her love of books and reading, and Michele is eternally grateful.