With: Leslie P. Garcia
Congratulations to Amy P., Colleen C. and Laney 4, the winner in Leslie's giveaway. Thank you to all who participated! 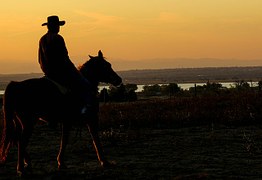 In the old TV westerns—the ones I watched for the horses, not the cowboys—few of the cowboys were married. Beautiful women drifted into and out of their lives more often than not, although a few, notably Miss Kitty, were permanent fixtures in that rough and free environment.

Cowboys worked months at a time away from home, drank, gambled, swore and fought—not the kind of men, really, that we would expect to hold our hearts in such a huge way.

So…what is it about cowboys?

Well, for readers, and on a strictly superficial—ethereal point of view, it’s those chiseled faces, washboard abs, and all that other eye candy models sport on romance novels and in movies. I’ve always held that although cowboys might have chopped wood half-naked (no one uses an axe in the altogether, not even the most drool worthy cowpuncher), never did a cowboy gallop around shirtless. Too many impediments—weather, bugs, brush—a man intelligent enough to become legend couldn’t possibly have done that. But certain truths—that not every cowboy was magnificent, that few did their chores with as little clothing as possible—are only the beginning point. One builds on truth—and the truth is that cowboys were and are remarkable men.

Fair, independent, gentle and fierce, depending on what a situation demanded. Fairly or falsely, those knights of the western era became known as honest and dependable. You could count on a cowboy to do everything that he said he would, to protect you and cherish you, even if eventually he left you. And what woman then or now doesn’t believe that she can change a man, even a cowboy, if she just loves strongly enough?

But to me, the main attribute has to be that cowboy charisma. Yeah, being of southern rearing, a tip of the Braves cap is okay—but when someone touches the brim of that Stetson and smiles—that’s a whole new ballgame--or rodeo. Cowboys love their environment, and can convince the rest of us that sleeping under the stars on rocks with scorpions scurrying around is sexy. Or at least rewarding. They have that much charisma. Cowboys can dare with a look, promise with a touch.

And so, the legend lives on. We love on. And off on the horizon, the silhouette of a man on a horse at sunset—but he’s riding our way. 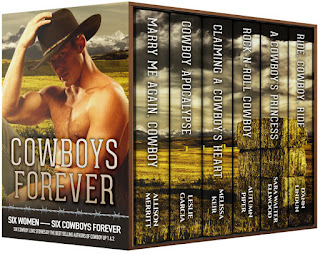 Here’s an excerpt from Cowboy Apocalypse, my offering about a cowboy trying to go home and a movie star tired of the Hollywood life.

Stone laughed. “You called him my crazy friend. We pretty much terrorized the school, to hear us talk back then.”

“Baby Bennett!” she crowed, her face lighting up as she remembered. “He left with you when you enlisted!”

“Doubt a grown man buying his own piece of ground hankers to be known as ‘Baby’ anything,” Stan noted wryly, then flinched when his cell phone rang suddenly. “Might be Mr. Salinas.” He dug it out of his pocket and peered at it. “Well!” Then he pushed the button. “Juan Ramirez, you old goat! You haven’t called in months! How are you?”

He listened, his mouth turned down at the corners. “Why I never—no, sure. Stone’s home. He’s sitting right here. Well, no, glad you called us first. Why would anyone be looking for my boy anyhow?”

Stone watched in puzzlement as his father’s brows drew together as if in confusion. Finally, curiosity got the best of him.

“Okay, Juan, thanks. No, it’s okay that you told them. At least you let us know before they got here. Okey dokey. See you.”

He clicked the phone off and looked at Stone and Lois.

“Honey,” Lois said gently, her fingers clutching her fork, “if you don’t tell us what’s going on, we’re going to get really upset with you.”

“I don’t want that.” Stan sighed. “Someone went by Juan’s looking for Stone.”

“You dated his daughter before you left home. He and I used to go up to north Texas together to buy new stock.”

“Well, seems his wife and daughter both saw your picture on the news and that Facebook thing all you young people use.”

“Where would anyone get a picture of me?”

“The one kissing the young lady. Apparently some folks there in the store took pictures of you as you left.”

“Why on earth would they do that?” his mother asked, as bewildered as he was.

“Well, they figured he was some movie star.” Stan chuckled. “Who would have thought!”
“Who’s coming to the ranch?” Stone prodded. “And why?”

His father shrugged and finished his coffee. “Folks from that movie they’re making ‘round here. They want to ask if you can ride a horse.” Stan pushed his chair back and stood, picking up his plate and cup.

“If you can,” he finished, heading toward the sink, “they’re gonna make you a movie star.”

An unlikely match made in Texas...

Greer Daily is happy running the ranch she inherited from her father until a resort opens up next door and unruly guests terrorize her livestock and destroy her fences. After she confronts two of them and the situation gets sticky, she finds herself venting her fury on sexy resort owner Guy Carter. But the smooth-talking cowboy isn't getting out of this mess easily. She wants reparations for her trouble.

Guy's first initial meeting with Greer could've gone better, but he hopes to placate her fiery temper by making amends for the fences. When a judge calls them out for being irresponsible and self-absorbed, then orders them to marry, Guy's whole world is upended. Their choices: Six months of marriage or a month of jail time. How bad can a few months with the queen of the cattle range be? Heaven if he can get her to bend, hell if she maintains her starchier than pressed jeans attitude.

Just as something deeper than friendship blossoms between them, Guy's personal assistant throws a wrench into the marriage of inconvenience. If Greer and Guy can't overcome that particular pothole, they have more to lose than their freedom--a lifetime of love.

Can a former Marine and a Hollywood diva facing apocalyptic changes in their lives salvage new beginnings together?

When Stone Winters joined the Marines, he always meant to come home. A woman’s impossible dream kept him away so long that he doesn’t think there’s anything left—especially not when he meets Price Adams, a film star with another impossible dream. He just doesn’t think he’s up for that again.

Price Adams traded in a childhood on her grandparents’ ranch for Hollywood glitz in spite of being a teenage mother. Torn between the stardom she won and full-time custody of her daughter, she accepts one last role—in Cowboy Apocalypse, an inane movie about zombies being filmed on ranches around deep south Texas. Burned by men more times than she can remember, Price doesn’t want a man in her life—especially not one who looks down on her career and the courage she needs to let it all go.

Even broken souls deserve a second chance at love…

Elementary Teacher, Michelle Alt’s faced untold trials in her life, yet she continues to do what’s right to make things better for the next generation.

Cowboy Veterinarian, Preston Hall has lost everything in order to follow his dreams and return to his grandfather’s small town practice.

These two broken souls recognize each other’s pain and come together to heal, but fear and misunderstandings send their blossoming relationship into a tailspin. Will they be able to put aside their pain to find the love of a lifetime?

Never judge a rock band by its cover song.

A cowboy leading a rock band? Logan gets an earful from his dad every time he leaves the house to perform. His rock persona destroys his ranching cred with the old-timers, and sticking to the cowboy life instead of running off to Hollywood cost him his girlfriend. Yet, he dreams of success in both worlds, and he’s determined to find a way.

Melody agrees to run a publicity campaign for a local rock band, fully immune to the sexy lead singer’s magnetism—she had childhood experience with a rocker’s absences. Still, Logan is charming, and vulnerable. And persistent…

Logan can tell Melody’s PR plan is his passport to popularity. He has to keep his hands off her, or he just might blow his one shot at making it big.

Oil and water don't mix...neither does Texas oil royalty and an ex-Navy SEAL turned rodeo cowboy until danger forces them together.

All retired Navy SEAL turned rodeo cowboy Justin Tanner wants is to get to his next rodeo when a vision in a pair of tight fitting jeans walks up to him and hands him his deepest desire on a silver platter—the deed to his father’s ranch, land her grandfather had swindled him out of.

Lacey Mackenzie is true Texas oil royalty, but when her grandfather dies and leaves her the keys to the kingdom, she finds herself with more enemies than friends and only Justin’s name as the one who can protect her, but can he after she discovers only the oil under his promised ranch can save her company. When her enemies attack, he’s duty bound to save her, but can he give her the one thing she wants after a hot night of passion—his heart?

Can they find freedom together?

A locked up heart.

After imprisoned in a federal penitentiary for ten years over a woman's betrayal, the last thing Lyle Landry is looking for is love.  A quick tumble?  Sure.  A cold beer?  Absolutely. And then he's on to the rodeo circuit to reclaim his title.

After her ex-husband leaves her high, dry and dead broke, another man isn’t high on Sarah Reed’s list. Especially a sexy ex-con who makes it perfectly clear he’s not interested in more than a one night stand. But his determination to make something out of himself impresses her more than she wants to admit, and she falls hard for the cowboy.

Giveaway:
Leslie will be giving away 2 copies of Cowboys Forever, and a $10.00 Amazon gift card.

Giveaway ends 11:59pm EST Dec. 27th. Please supply your email in the post. You may use spaces or full text for security. (ex. jsmith at gmail dot com) If you do not wish to supply your email, or have trouble posting, please email maureen@JustContemporaryRomance.com with a subject title of JCR GIVEAWAY to be entered in the current giveaway.
Posted by Maureen A. Miller at 12:30 AM