I had been published for a couple of years when someone at a convention asked me what I wrote. (They obviously hadn’t read anything of mine, right?) I think I could have told them anything and they would have believed me but I simply said, Romance.
Well, they persisted, what kind of romance?
I shrugged. Every kind of romance. One that has a happy ending.
Oh, they went on, then you write contemporary romance. You write like Nora Roberts and Susan Elizabeth Phillips.
Oh, sure. I only wish!
I discovered that contemporary romance is really amorphous. It only has two requirements: it has to take place in the very here and now and it has to have a happy ending. Well, shoot, that worked for me. I can’t even read a book without a happy ending, let alone write one.
So that brought me to the subgenre of sports romance. I asked someone if that would be considered contemporary romance and was told, well, of course. (Dummy. They didn’t say dummy, but, you know.) So here I am, in a subgenre of romance, writing in a sub/subgenre, and having a blast. Contemporary sports romance. That’s me. With a series I am totally loving.
I write contemporary (which means present time) because that’s the era I feel most comfortable in. It’s also the easiest for me to research. When I badgered coaches and players and reporters about the Game On series, I don’t think I would have had as much success in centering myself if I’d dealt with past decades. I like to deal with the here and now.
Besides, the sports world changes so fast and so often that it’s hard enough to keep up with it. When I researched Jake Russell, I wanted to go beyond the headlines beyond the sound bytes on television, beyond the blogs by people who seem to take great delight in tearing down our heroes.
I wanted a man with depth, with secrets, yet with a lot of emotion to give if someone could find a way to unlock the closet he kept those feelings in. A hero on the field to everyone but maybe not a hero in his own mind. And I wanted a heroine who had her own insecurities but as feisty enough to deal with him.
Telling the story of Erin and Jake was a wonderful journey for me. It is most definitely a contemporary romance, a sports contemporary romance. With maybe a little women’s fiction thrown in, and I’ve learned that’s okay, too. I hope you enjoy reading their story as much as I enjoyed writing it. 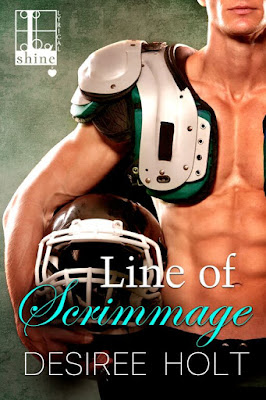 Sometimes it’s not about winning…

One bad tackle. That’s all it took to put wide receiver Jake Russell in a cast for the rest of the NFL season. From being a high school all-star to getting drafted by the Austin Mustangs, football has been Jake’s life for as long as he can remember. It’s what defines him—because he has a secret he never shares. But now that he’s laid up in bed with a nurse displaying a lot of distracting bedside manners, he’s discovering life on the sidelines might have its perks. . .

One last paycheck. That’s all Erin Bass has left to her name when the resort she works at shuts down. Desperate, she agrees to be a caregiver to hardass jock Jake Russell, who also happens to be a memorable one-night stand. Before long, caring leads to daring new ways to catch up in bed, especially with Jake still in a cast. But with football on the sidelines, this time the game is serious. . .

Author Bio
Desiree Holt has produced more than two hundred titles in nearly every subgenre of romance fiction. She is a winner of the EPIC E-Book Award, an Authors after Dark Author of the Year and of the Holt Medallion. She has been featured on CBS Sunday Morning and in The Village Voice, The Daily Beast, USA Today, The Wall Street Journal, The London Daily Mail and numerous other national and international publications. She enjoys football and reading and her three cats, who are her constant writing companions.