In Praise of the Unusual Occupation

Hi everyone, I’m Jamie Wesley, and I’m so excited to be back at Just Contemporary Romance! 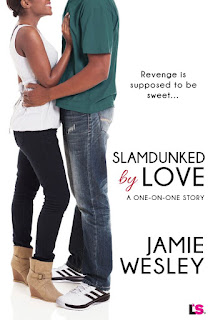 I love sports, and I love romance, so when it was time to write my next book, I knew I wanted to write a sports romance. I’ve read tons of football, baseball, and hockey romances, so I thought I’d write a basketball player hero. SLAMDUNKED BY LOVE was born.

I love basketball, so I didn’t think much of it.  Until someone pointed out how unusual it was to make the hero a basketball player instead of football or baseball.

I also got the “unusual profession” comment about my first book, TELL ME SOMETHING GOOD, in which both main characters are radio talk show hosts. Again, while writing the book, it never occurred to me that I was doing something “different,” because I listen to sports talk radio every day.

I’m so happy I didn’t change the sport in SLAMDUNKED BY LOVE.  All the unique challenges basketball presents makes Brady the wonderful and complicated hero he is. He’s just been traded to a new team and is trying to figure out how to fit in and still be true to himself. He’s obsessing over his last game, a loss his new teammates blame on him. Oh, and did I mention he’s one of the best players in the league, a fact he definitely knows and revels in?

And that’s all before he meets the heroine, Caitlin, who knows a little bit about the game and is never afraid to offer her opinion. She happens to be a radio show producer (another unusual career?).

Basically, I love this book and its so-called weirdness. :)

To celebrate the release of SLAMDUNKED BY LOVE, I’m giving away a $10 gift card to Amazon or Barnes & Noble! All you have to do is answer one of the below questions about unusual professions in books and fill out the Rafflecopter!

Questions: Do you like unusual professions for your hero and heroines? Do you give their careers much thought when reading blurbs for books and deciding what to read next? What profession have you enjoyed reading and learning about? 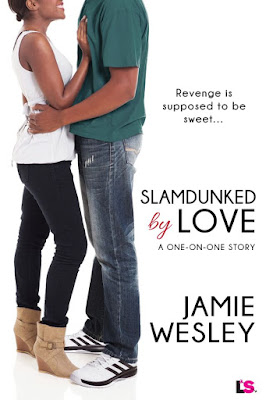 Revenge is supposed to be sweet…

Caitlin Monroe is ready to confront her past. Years ago, her father ditched her mother for the NBA, leaving her pregnant and alone. Now he’s a big-shot coach, and Caitlin’s ready to take the so-called “family man” down. But on her way to the team gala, her car dies, and it’s her father’s sexy new star player who comes to her rescue.

Brady Hudson wants nothing more than to put his past behind him and concentrate on winning the championship for his new team. But when he finds himself the recipient of unwanted attention—attention that could destroy his career—he introduces the beautiful woman he saved on the side of the road as his "girlfriend."

Brady needs to focus on his job. And Caitlin isn’t about to date an athlete whose career is riding on her father—though he is a convenient way to get the dirt she needs. But sometimes love has other ideas, and it’s not long before their pretend relationship becomes a liability neither can resist…

Excerpt
Caitlin moved away to lean on the hood of the car.

Brady stepped directly in front of her, bringing him and his scent way too close again and forcing her to look up at him. Because he was a point guard, he wasn’t required to be a giant like most of the other players in the NBA. He was “only” six-three, if memory served her correctly, but he towered over her anyway. Granted that wasn’t saying much since she was five-two without heels. If she practiced perfect posture. Even with the heels, she wasn’t setting any height records. But looking up at him wasn’t exactly a hardship. In any way, shape, or form. He was a fine specimen of a man.

She started, realizing she’d been staring at his sculpted lips again. And based on the smile that played across said lips, he knew it.

About the author
Jamie Wesley has been reading romance novels since she was about 12 when her mother left a romance novel, which a friend had given her, on the nightstand. Jamie read it instead, and the rest is history.

She also adores Walt Disney World, shopping, and pop culture. Want to know if your favorite TV show is going to be canceled or what the newest Disney attraction is? Ask Jamie. She'll probably know the answer. Connect with her at: