Congratulations to "Mandy", the winner in Tina's giveaway. Thank you to all who participated!

Second chance romance. Mm, the thought of it can be, well, let’s say tantalizing. Intriguing. Perhaps even a little forbidden. Maybe we fantasize that our long lost love still pines for us. Regrets letting us go. That person becomes a memory, a fantasy, and then … they appear in our life. Or we’re thrown together. He’s both familiar and a stranger. We know his strengths and weaknesses, his likes and dislikes, but he’s also changed in the intervening years. There’s an element of mystery intertwined with the familiar.

I asked my readers awhile back why they love second chance romance. Sheryl Larson, a reader, said, “It's about redemption, reconciliation, reconnecting with their long lost love that for whatever reason got away or they pushed away.” Another reader, Jade Elyzabeth, said, “I love them because it gives those of us who mess up a heart warming feeling that things could still work out and that the people who love us could forgive our mistakes.” Jenni Dinh, of Bitten by Love Reviews, wrote an article on second chance romances, which ends with: “Are we strong enough to take on this feeling that got put on the back burner years ago? Has he changed? Has she changed? What kind of person he/she is now? If we had stuck together, what would have become of us? The questions will all be answered — you just have to take a leap of faith and let yourself fall in love again.” (http://romanceatrandom.com/love-is-sweeter-the-second-time-around/)

The first book I ever read that featured a second chance plot was Danielle Steele’s The Promise. It was about a couple who were getting married despite the wealthy hero’s family’s objections. They get into a terrible car accident that disfigures her. While some unlikely plot twists separate them, I loved the anticipation of that moment when they would be reunited. 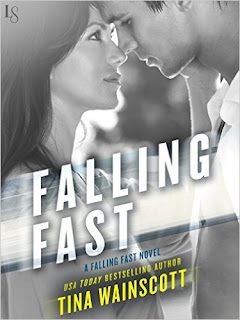 It’s the fantasy that gets us writers going, our imaginations humming away with bits and pieces of a movie in our minds. My first two books in my Falling Fast series ended up having this theme, along with a “coming back to town” theme.

In Falling Fast, book 1, the leads had actually been lovers whose relationship was shattered by a terrible accident. In Falling Hard, I gave them a different twist. Pax and Gemma meet at the same illegal street races that factor into the pasts of the first book’s leads. They feel the same spark, the same draw to each other, on that hot summer night. But Gemma was just shipped down to Chambliss, Florida, the small beach town where her father lives, because of her wild behavior. The last thing she needs, especially after hearing her divorced parents talking about boarding school, is to fall hard for a bad boy. By the time high school starts, she’s dating the clean-cut captain of the football team—whom she finds out is Pax’s brother. And that brother commits a criminal act against her, one no one believes. When the rape charges are dropped, she returns to her mother. Her life goes on, but she harbors that secret pain, along with lots of regrets.

That is the past that layers the characters’ relationship. When the story opens seven years later, she must return to Chambliss after her father is injured in an accident. And my job as an author is to throw them together in sweetly devious ways so that they’ll see how they were so meant to be together … even with seemingly insurmountable obstacles and hurt feelings between them. And of course, I want some justice, too.

Giveaway question: We all fall hard for things, people … puppies! What is something or someone you’ve fallen hard for?


Tina will be giving away a digital copy of FALLING FAST, book 1 of the Falling series, and a $10 Amazon Gift Card to one lucky person leaving a comment or email entry. 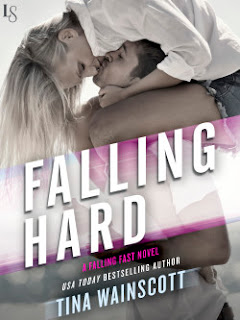 In bestselling author Tina Wainscott’s gritty, emotional small-town romance—perfect for fans of Jasinda Wilder and Colleen Hoover—passions run high as a reformed bad boy reconnects with an old enemy . . . and gets her engine revving.


There’s no one Pax Sullivan wants to run into less than Gemma Thornton. Back in high school, she revved his heart more than street racing. But she picked his clean-cut brother over him—only to accuse Blake of an unforgivable crime. Eventually the charges were dropped and Gemma left town, but the hard feelings lingered . . . along with Pax’s gnawing “what-ifs.” Seven years later, just as he quits the police force to open a racetrack, Gemma’s back—and their chemistry is more combustible than ever.

If it were up to her, Gemma would never lay eyes on another Sullivan. She hates them, and they hate her—even Pax, who just so happens to be fixing up her father’s B&B. But the more time she spends with the lean, hard-bodied ex-cop at the inn and on the track, the more Gemma sees that Pax is nothing like his brother. Despite their anguished history, she’s tempted to take their relationship into high gear . . . if she can face the past and risk her heart.

As Paxton Sullivan traveled along the dark highway toward the north end of Chambliss, where the B&B was located, he spotted a car pulled off the road. Judging by its sideways tilt, a flat tire seemed likely.

Giveaway ends 11:59pm EST Dec. 19th. Please supply your email in the post. You may use spaces or full text for security. (ex. jsmith at gmail dot com) If you do not wish to supply your email, or have trouble posting, please email maureen@JustContemporaryRomance.com with a subject title of JCR GIVEAWAY to be entered in the current giveaway. US residents only.