Todd’s my next-door neighbor—an up-and-coming chef ready to make his mark on the world. His dreams are bold and limitless, his drive even more so. He offers me a favor, one that I can’t refuse … only there are strings attached.

Amelia’s my next-door neighbor—a talented photographer waiting for her big break.
Her dreams are authentic and intense, her art even more so. I made her an offer and she accepted … but I asked for something in return.

Two favors meant to make our dreams come true. Our careers were supposed to change, not our friendship. Success was the ultimate goal … until we saw each other in a different light.

“Yeah. I was thinking…since he’s definitely into you—”
Her head springs my way. “You think he’s into me?” she interrupts. Her eyes open wide in surprise.
Now, she’s perked up.
“Yes.”
A small smile creeps up the corners of her mouth, and she shakes her head in disbelief.
“I think he was just being a nice boss.” She focuses down and I wonder what’s going on in that head of hers. I sensed her low self-esteem a few times, but she usually smiles through it—at least in front of me.
“Trust me, Noodle. He’s interested.”
She shrugs.
“So, I was thinking that you could keep him distracted and get him to go out—at least, out of the kitchen.”
“What?” She stops, and hurt fills her eyes before confusion sets in. “You trying to whore me out or something?”
Shit. I should have led into that easier. Slower, for sure.
A deep chuckle pours out of me. “No.” I attempt to calm my humor down. “I’m not asking you to screw him. Just flirt a little. Keep him out of the kitchen. You might even like him.”
“Is this a stipulation of you getting me the job?” She crosses her arms over her chest and juts out her hip.
She’s oddly cute when she’s mad and damn—those tits.
“No. I already got you the job. I was thinking this would be more of a thank-you gesture.” My shoulders lift.
She inhales a deep breath. “How about just the ‘nightcap’?” She puts nightcap in air quotes.
“I’ll buy the nightcap. Just put yourself out there, and see if he bites.”
This might be getting worse instead of better.
“Seriously, Todd, you are demented.”
She shakes her head and steadily proceeds toward the subway.
I jog to catch up to her. “Hold up.”
I grip her arm, but she yanks it out of my grasp.
“I’m sorry. It’s just that I want to find investors for my own place. He’s always there, never letting me showcase any of my dishes. I’ve tried to go through the chain, asking him to let me create a special here or there, but he’s refused me every time.” I hold her vision with mine until the corners of her lips turn. “Forget I asked.” My shoulders deflate as I realize it was a dick move. I’ve officially lost it. My desperation is definitely clouding my judgment.
“Apology accepted.”
I stop. A warm feeling spurs in my stomach from her ability to forgive me so easily.
I follow her to the top of the subway stairs.
“I saw how he was looking at you in the kitchen, and I just thought it could be good for both of us.”
She giggles and shoves me. “So, you thought, ’yeah, I’ll whore Lia out’.”
“Actually, I thought, ‘I’ll whore Noodle out’.”
Her hand reaches out to shove me again, but I grab ahold of it and pull her in to me. A strawberry scent floats from her hair. This is the first time I’ve hugged her, and from her limp arms, I’m thinking I’ve made another dumbass move by initiating contact.
She laughs into my sweatshirt and steps back. “You’re a rare duck, you know that?” She jogs down the subway steps.
“More like a lone duck,” I mumble behind her. 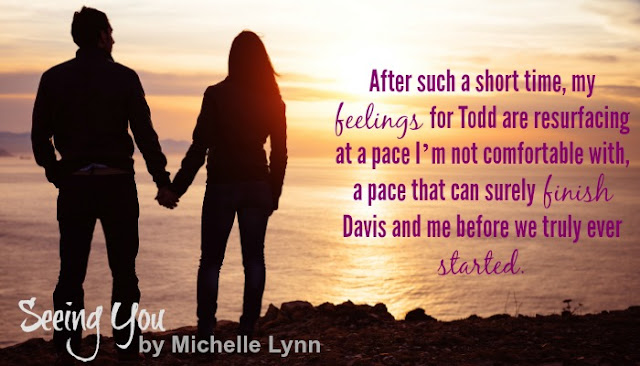 USA Today Bestselling author, Michelle Lynn moved around the Midwest most of her life, transferring from school to school before settling down in the outskirts of Chicago ten years ago, where she now resides with her husband and two kids.  She developed a love of reading at a young age, which helped lay the foundation for her passion to write.   With the encouragement of her family, she finally sat down and wrote one of the many stories that have been floating around in her head. When she isn’t reading or writing, she can be found playing with her kids, talking to her mom on the phone, or hanging out with her family and friends.  But after chasing around twin preschoolers all day, she always cherishes her relaxation time after putting the kids to bed.