1) I'm a sucker for the Cinderella trope, especially if Cinderella isn't just sweeping up the floor and waiting for her prince to come. I like a Cinderella who is actively working to change her station in life!

2) Reunion romances make me cry. I love watching the play of past feelings mingling with new, the personal drama that sets off and the way people who think they just can't go on together actually find those little things they hated or didn't understand about the other...they now do. Because, as Liz said on Monday, don't we all go through those times when we have to find one another all over again?

3) Friends to Lovers. Like reunions, friends to lovers make me a squishy inside. Seeing a friendship grow to more than either person thought it ever could? So rewarding! As flamboyant as the love at first sight story can be, for me the fireworks of a friends to lovers story burns brighter and longer...because there is so much to lose. If love-at-first-sight doesn't work out? You still have your friends...if you take a chance on love and lost a friendship? That sets off little explosions throughout the characters' worlds.

I like to think the ending is a trope, too. The ending is my favorite part. I love to watch the hero and heroine riding or walking or driving into the sunset, together. In my imagination, they're holding hands and as they move farther away from me, they're getting smaller, growing older...but they're still holding hands. Because don't we all want to be holding hands with someone that special as we grow older?

So, that about you? What's your favorite part of the romance novel? 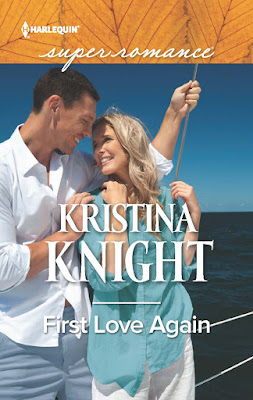 Some loves deserve a second chance…

Coming back to Gulliver Island after a ten-year absence to take care of his father should have been simple. Emmett Deal would fix and sell the family home, and return to Cincinnati with his ailing father in tow. Yet something compels him to stay a little longer. The beautiful, bright eyes of Jaime Brown.

Ten years ago, traumatic events changed the course of Jaime's life forever, catching her in a small-town life she can't escape. Emmett's return stirs up the memories she wanted to ignore…and dreams she had forgotten. Now she finds herself with a rare opportunity—a second chance. Only this time, it's not just for love…

Kissing Emmett was different and the same at the same time. Different in the way it had made her feel as though she’d never been kissed before. The same because it was Emmett and kissing him had always been familiar. Like coming home.

“God, you’re so conceited. I kissed you as much as you kissed me. Women are allowed to kiss men, you know. We even sometimes have the audacity to start the kiss all on our own.”

“Emmett.” She mimicked his tone, wondering why he was so annoyed when he’d started this in the first place. She actively wanted the same things, and it was a little scary, but she wasn’t about to turn away from any of it.

Jaime didn’t say anything so she marched to his side of the room. “Kiss me.”

“I don’t kiss women who don’t know what they want.”

“Okay, now you’re pissing me off. Since when do I not know what I want?”

Author Bio:
Once upon a time, Kristina Knight spent her days running from car crash to fire to meetings with local police--no, she wasn't a troublemaker, she was a journalist. Her career took her all over the United States, writing about everything from a serial killer's capture to the National Finals Rodeo. Along the way, she found her very own Knight in Shining Cowboy Boots and an abiding love for romance novels. And just like the characters from her favorite books, she's living her own happily ever after.