When a Crush Turns Into Something Real

Congratulations to "jcp", the winner in Miranda's giveaway. Thank you to all who participated! 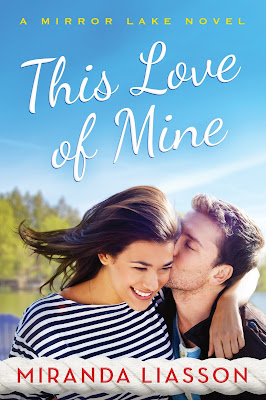 My heroine in This Love of Mine, Meg Halloran, has a busy life without much time for herself. (Sounds familiar, right?) Her mom’s got a chronic medical condition and Meg does a lot for her, plus her partner in their upstart bridal business is out on bed rest, pregnant with twins. Like a lot of us, Meg’s sort of allowed her life to take a backseat to everything else she has going on.

In addition, she’s had a crush on Ben Rushford, an ER doctor and one of the hunky Rushford brothers, for way too long. Ben has his own reasons for avoiding her, but Meg thinks it’s because Ben is a devil-may-care, happy-go-lucky guy who prefers having a different hot girlfriend every weekend rather than date someone like her (who’s a little shy, awkward, and quirky).

They barely speak, and when they do, Meg tends to get tongue-tied. She finally reaches a point where she says Enough! I’m giving up this obsession and I’m going to take my life into my own hands.

When Ben desperately asks Meg to step in for an important date (after his date has dumped him), she tells him NO WAY. (Good girl, Meggie!)

But then fate intervenes when Meg’s current Bridezilla has a panic attack and throws Meg and Ben together in the most unlikely way possible.

We’ve all gone through crushes and infatuations. A crush will only pass a certain point when we discover that our crush is just human after all. Meg is forced to get past that awkward, tongue-tied feeling with Ben because she finally sees him as he really is. It’s not until they are both brutally honest with one another that they can get past the tragedy in their past and can be open to a real relationship.

Giveaway:
Sometimes a crush is a one-way train leading to disaster. And sometimes it can lead to something deeper and richer—a real relationship. So for a chance at winning a signed copy of This Love of Mine, what’s your crush experience? Disaster or did it set you off on the road to love?


As he flung her out one final time, she lost balance a little and cast out an arm to compensate. She stumbled, clutching at him to avoid falling. That was when she heard the rip.


The first sensation was relief—she could finally breathe. But that was followed quickly by terror as she realized the entire seam along the backside of her dress had ripped wide open, and the entire restaurant was about to catch a full and unobstructed view of her ass.


She spun and backed up against Ben’s body, plastering herself flat against him.


“Wow, Meggie,” Ben said as she ground into his crotch. “I never realized dancing got you so hot.”


She twisted her neck around far enough to send him the stink eye. Then she clutched at him for dear life.


“Do not move away from me,” she managed.


“Sure, no problem. Are you . . . flirting with me? Because if you are, I’m all in.” As she pushed against him, he wrapped his hands around her upper arms, a move which normally would have caused goose bumps to course up and down their lengths.


She scootched up against his chest and put her mouth near his ear. “Listen to me carefully. I’m only going to say this once. I am not flirting with you. My dress tore and . . .”


He stilled suddenly. “And what?” he asked.


“And I always wear undies. I never go anywhere without them. Except maybe for today.”


Bio:
Miranda Liasson loves to write stories about courageous but flawed characters who find love despite themselves, because there’s nothing like a great love story. And if there are a few laughs along the way, even better! She’s a former Golden Heart winner who writes lighthearted contemporary romance for Montlake Publishing and also writes series romance for Entangled Publishing. She lives in the Midwest with her husband, three kids, and Posey, a rescue cat with attitude.

Giveaway ends 11:59pm EST Oct. 10th. Please supply your email in the post. You may use spaces or full text for security. (ex. jsmith at gmail dot com) If you do not wish to supply your email, or have trouble posting, please email maureen@JustContemporaryRomance.com with a subject title of JCR GIVEAWAY to be entered in the current giveaway.