The Benefits of an Imaginary Country

The first thing you need to know is that I love to research. Like most authors, I'm insatiably curious, and writing gives me the excuse to walk up to perfect strangers (or libraries), and say, “Tell me about your job as firefighter/cop/scientist/masseuse/train conductor.” I get to learn about picking locks, the Waterloo battle plan, the workings of a country house, how to profile a serial killer. Anything that interests me is available. And believe me. At one time or another, I've been interested in just about everything.

I've also traveled as many places as I could, not just because I love travel (I do), but to make my settings realistic. I walked the streets of Mayfair, just as my characters would in my Drake's Rakes series. I sailed off Hawaii, visited a flower market in Calcutta, road gondolas and canal boats and bicycled along the Atacama Desert in Bolivia (still don't have that in a book. It'll find its way in something. Don't worry.).

But sometimes, it's just much more fun to make stuff up. Well, more stuff than characters, I mean. Towns, villages, countries. The lovely thing about inventing your own country, is that nobody can come back to you and say, “How dare you? Main Street goes east and west. Not north and south.”  It does in my imaginary town, and nobody can argue about it.

When I decided to nestle a couple of stories within a royal family, I realized I didn't want to use a real one. First of all, everybody knows way too much about the real ones for me to slip a couple of members inside. A Crown Princess and Prince, to be exact, the princess the heir to the throne. Yes, there are families in which the daughter is the next heir. But I feel pretty certain they didn't want me portraying that daughter as a spoiled brat.

So I invented my own country. My own royal family. I have to say it was a kick. I just love being in control of everybody, like a tiny god pulling strings. I love building that world, from brick and stone to favorite cuisine. And I love peopling it.

I peopled mine with very well-educated people who speak multiple languages, but where English has just been declared the national language. And since I have a Brooklyn secretary stepping in to impersonate the real princess, that comes in handy. Even if Casey Phillips's ancestors did come from Moritania, it is unlikely she would speak the language. I set up my own heirarchy, traditions and problems. And I put them together into A Prince of a Guy, and nobody can say I'm wrong.

Well, one lady tried. She sent me a very terse letter.

You obviously know nothing about royal protocol.”

“Dear madame,” I wrote back. 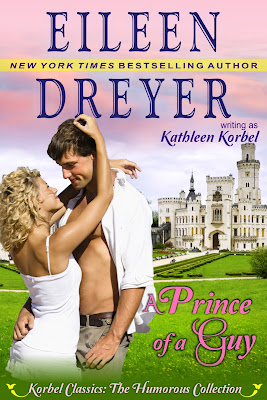 PRINCE OF A GUY

When New Yorker Casey Phillips visits the tiny country of Moritania, she simply wants to see where her ancestors came from. Instead, she's mistaken for a princess.

The real princess has been kidnapped, and Crown Prince Eric von Lieberhaven insists Casey—a dead ringer for the missing royal—step into the princess's shoes until she can be freed.

As Casey upends royal tradition, Eric finds himself hoping the cheeky American never returns home. But can a secretary from Brooklyn really find happiness with a prince?

REVIEWS:
"You don't want to miss this delight." ~RT Bookclub

"Not your average Cinderella story." ~Rendezvous

KORBEL CLASSICS: HUMOROUS SERIES, in order
The Ice Cream Man
Isn't It Romantic?
A Prince of a Guy
The Princess and the Pea
A Fine Madness

ABOUT EILEEN DREYER:
New York Times bestselling author Eileen Dreyer has been inducted into the Romance Writers of America Hall of Fame, nominated for the Anthony Award and is a retired trauma nurse. Also trained in forensic nursing and death investigation, Eileen doesn't see herself actively working in those fields, unless this writing thing doesn't pan out.

Looking for giveaways? Check out the JCR Showcase!
Posted by Maureen A. Miller at 12:30 AM