For the Love of a Cowboy


When I was a young girl, I would sit on the floor and play with dolls while my father watched old westerns on our big TV. No, we weren’t a rich family. It was the 80s and everyone had televisions housed inside wooden cabinets the size of the president’s desk. But rather than paying attention to the toys I’d unknowingly casted aside, I caught myself staring at the black and white movies, fascinated by the hat-tippin’, gun-slinging outlaws, miners, ranchers, and lawmen of the Old West.

But it wasn’t until I matured and moved on to my dating years that I became truly enamored with cowboys. I loved everything about them.  Their simple way of life. Their sexy southern drawls. And most of all, their overall…maleness. So it was only natural for me to write about a hero with those features and nickname him Cowboy.

Although Cowboy wears a signature white Stetson and rides a horse on occasion, he’s not your ordinary cattle rustler. Nope, not this guy. This firefighting playboy is way more likely to be found rounding up women than livestock. So what better way to test his patience and persistence than to give him a heroine who wants nothing to do with him? Well, doesn’t want much to do with him, that is. Anna is a feisty, old-fashioned librarian who doesn’t have time to play games with the town’s most eligible bachelor, but you know what they say. Nothing ignites a fire like the perfect match… 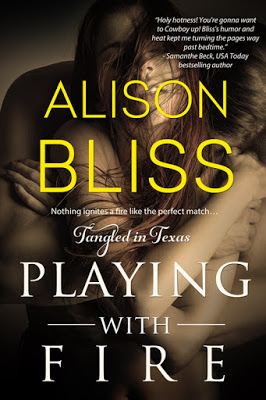 Here’s an excerpt from PLAYING WITH FIRE:

I was still leaning against the door moments later when someone rapped lightly on the other side. What the hell?

I opened it to find Cowboy filling the space with unnerving eyes, a strange look of desperation on his face, and his mouth held in a grim, firm line. “I should keep my hands off you,” he said with a hoarseness to his voice.

“Um, okay.” Guess he was more repulsed than I thought, because he was going ahead with the insincere apology, after all. “You came back to tell me that?”

“No, I forgot something.” He sounded even more irritated than when I first opened the door.

“Oh. What’d you forget?” I started to turn to look for a set of keys or something else that could be his, but he gripped my arm to stop me.

“This,” he said, spinning me back to him and covering my mouth with his.

Since I’d first met him, I’d always wondered what it would be like to be under that perfect mouth of his, and now that I was finding out, I stood there stupidly with my fish lips smashed against his in the most unflattering way.

But that didn’t deter him. He moved his lips slowly against mine, patiently awaiting my response. And he got one. Within seconds, my passive lips became soft and pliant against his as our mouths began a seductive dance together. His warmth tempered my body, bringing it to just the right degree, until I melted into him, my fingers gripping his shirt as I kissed him back with no physical hesitation.

Mentally, I was still hesitating, though. “We shouldn’t be doing this,” I whispered between kisses.

In answer, his hands moved into my hair, tilting my head slightly to the right, as his breath tickled across my lips. “Open your mouth and shut up,” he murmured, bringing my face back to his. 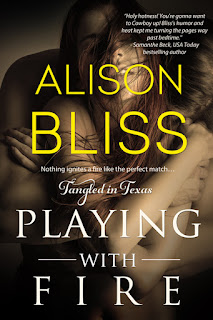 Anna Weber is every inch the proper librarian—old-fashioned, conservatively dressed right down to her tightly clipped flaming red hair. She's just moved to a small Texas town, and is determined to spend time with her friend before she has to disappear. Relationships aren’t easy for her. She knows too well what it means to be burned. And the last thing she ever wants to do is fall in love…

Especially not with a fireman who's hot enough to set the entire state of Texas on fire.

Cowboy can't resist the fiery little librarian, and he's determined to make her his. Beneath that prim-and-proper exterior is a woman he very much wants to know—if she'd let him. She'll test his patience. His control. Hell, his very sanity. And for the first time, Cowboy wonders if he's found the one fire he can't control...

Alison Bliss grew up in Small Town, Texas, but currently resides in the Midwest with her husband and two sons. With so much testosterone in her home, it's no wonder she writes "girl books." She believes the best way to know if someone is your soul mate is by canoeing with them because if you both make it back alive, it's obviously meant to be. Alison pens the type of books she loves to read most: fun, steamy love stories with heart, heat, laughter, and usually a cowboy or two. As she calls it, "Romance...with a sense of humor."