Congratulations to "Alysa", the winner in Tracy's giveaway. Thank you to all who participated!

Sports romances are sexy.  For starters, they feature athletes with ripped bodies, nimble fingers, and lots of stamina. These guys are the ultimate Alpha hero because jocks live their lives playing a game.  Not only that, but they get paid well to do it.  Most of them are extremely self-confident and driven to win at all costs.  In a word, they’re egocentric.  Oh yeah, successful, athletic men are very, very sexy.

A good sports romance will give the reader a peek at the more vulnerable side of athletes, too.  These men harbor fears of not making the play or being injured or worse, cut from the team.  Some even have quirks or superstitious idiosyncrasies that make them endearing. A glimpse at the more human aspect of life as a professional athlete adds to the sexiness.

But, the best part of a sports romance is watching these alpha heroes have their whole world turned upside down when they meet the one woman they can’t live without.  Athletes approach relationships much like they do a game and they don’t like to lose.  So when they meet a woman that changes the game on them, it makes the sparks fly off the pages.

In my latest release, Sleeping with the Enemy, Baltimore Blaze owner, Jay McManus, is as tough as the players he employs. Jay has money, good lucks and power, making him the ultimate Alpha dog in the NFL.  He’s also loved and lost before. Now, when it comes to his relationships with women, he takes no prisoners.  When the team’s cheerleaders—spurred on by a menacing anonymous blogger—sue the Blaze on sexual harassment charges, Jay’s iron-fisted control begins to unravel.  It doesn’t help that the outside counsel retained by the Blaze to defend them is the one woman who has the ability to penetrate the chink in his armor.  Somebody’s going down…

So tell me, are you a fan of sports romances?  If you are, do you like them to include scenes from the playing field?  Obviously, I’m a big fan of the genre.  Here are a few of my favorites:
Body Check by Deidre Martin
This Heart of Mine by Susan Elizabeth Phillips
Slow Heat by Jill Shalvis
She Jane Score by Rachel Gibson

Giveaway:
Leave a comment with the title of your favorite sports romance book and I’ll select one reader to win a Baltimore Blaze gift pack including a signed copy of SLEEPING WITH THE ENEMY. 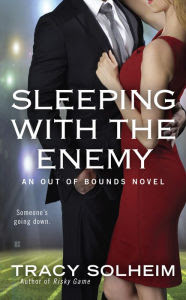 Dot-com millionaire Jay McManus is discovering that owning a pro football team like the Baltimore Blaze isn’t easy. An anonymous blogger is out to destroy his reputation, and now his team is being sued by its own cheerleaders. If Jay’s not careful, he could lose big—and not just financially.

Bridgett Janik’s brother may play for the Baltimore Blaze, but she’s not thrilled to be defending Jay McManus, the man who broke her heart. It’s bad enough she has to mingle with Jay during games, but working beside her former lover may be too much for her body—and her heart—to resist.

Jay’s determined not to let Bridgett slip away from him a second time. But, as the two follow the mysterious blogger’s trail, secrets—both past and present—are revealed, and Jay and Bridgett must decide if their relationship can be something more than just sleeping with the enemy.

Giveaway ends 11:59pm EST Sep. 2nd. Please supply your email in the post. You may use spaces or full text for security. (ex. jsmith at gmail dot com) If you do not wish to supply your email, or have trouble posting, please email maureen@JustContemporaryRomance.com with a subject title of JCR GIVEAWAY to be entered in the current giveaway.
Posted by Maureen A. Miller at 12:30 AM