While writing Waiting for Ethan, I participated in several novel writing workshops. I’d read a chapter out loud, and the other participants would critique it.  They rarely commented on my writing style. Instead, they voiced their opinions about my main character Gina and particularly why she was willing to put up with Ethan, her flawed love interest. Many of the other workshop participants had strong reactions to her choices, either not able to understand them or adamantly defending them. On the days my chapters were reviewed, there were many lively discussions, but as the writer, I wasn’t allowed to participate – the rule is the writer can’t speak until the critique is over. So, I sat back and enjoyed listening to the heated debates, excited that characters that existed only in my head could evoke such strong responses.

To be clear, Ethan isn’t abusive toward Gina. He’s going through a tumultuous time in his life and not handling it so well. Gina’s 36, single, desperately wants a family and thinks her destiny is a man named Ethan; in my mind, that’s why she put up with him. I’m certainly not saying her choices are good ones, but I understand why she makes them.  I also think every person who says I would never put up with that, puts up with something the rest of us wouldn’t stand for, even if it’s something incredibly minor like a partner who drops wet towels on the bed.

The truth is people sometimes make poor decisions when they think they’re in love – or want to be in love.  Gina convinces herself that she can help Ethan get through this rough patch in his life.  That’s why she sticks with him.

This is him at his worst I decide, and I can help him through it.

Gina’s thought might not be rational, but it’s a common.

Have you ever been in a relationship where you thought you could help the other person? How did it work out for you? Let me know by leaving a comment or sending an email to  Diane@dianembarnes.com. And if you read Waiting for Ethan, visit the blog on my website, www.dianembarnes.com, and let me know if you cringed at some of Gina’s choices or were able to understand them. 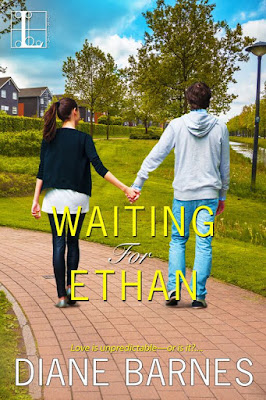 When Gina Rossi was in junior high, her best friend’s psychic grandmother got everything right—from predicting that Gina would break her arm and travel to Italy, all the way to leading police to a missing neighborhood child. The one time Gina didn’t listen to her, she almost got herself killed. So when she says that Gina will marry a man named Ethan—but she will have to wait for him—Gina believes her, and waits…

Now thirty-six, Gina’s Mr. Right is nowhere in sight—until the day she’s stranded in a snowstorm, and rescued by the last type of Ethan she expected. It’s very romantic, yet surprisingly not. This Ethan is sexy, and clearly her hero. Still, instead of her “Aha” moment, Gina’s confused. And when Ethan is happy to discover she’s single, does Gina dare tell him, It’s because I've been waiting for you? But the bigger question is, does she dare question destiny—by taking it into her own hands? And is she brave enough to handle what happens once it’s time to stop waiting—and start living?

Bio:
Though she always dreamed about being the shortstop for the Boston Red Sox, Diane Barnes is a marketing writer in Massachusetts. She participates in two monthly writing groups and regularly attends novel writing workshops in Boston and Worcester, Massachusetts. She started “Waiting for Ethan” as a challenge to participate in National Novel Writing Month. The original story was about a character who dated a string of freshly divorced men who all had issues with their ex-wives. She won’t say if it was autobiographical.

In 2012, Diane was one of eight writers who attended the Boston Writers’ Studio, an exclusive four-day intense writing workshop taught by bestselling author Elizabeth Berg. Diane says having her idol read her work was a moment she’ll never forget.

When not crafting novels, Diane spends her time playing tennis, going to the beach or watching her beloved Red Sox. She completed her first half marathon last year (to combat her love of chocolate) and lives in central Massachusetts with her husband Steve; they often fantasize about moving to Turks and Caicos – for the winter months at least.
www.DianeMBarnes.com