I was recently asked why I write romantic comedy. It’s the story of my life! It’s not a matter of if, but when it will go wrong and just how bad the outcome will be. And usually I end up, in a pile of…well, you get the idea. My stories have that same quality about them. SOMETHING is going to go wrong. It’s all about survival, with a smile on your face.

Here’s an excerpt from Sex, Secrets, & Happily Ever Afters.

Angeline Talbot stood in the quaint old Lake Tahoe chapel. Though surrounded by happy people, she felt more alone than ever. “Happy freaking New Year to me.”

With a smile, the minister closed his sermon book and pressed it to his rotund belly. “I now pronounce you husband and wife. You may kiss your bride.”

Angel wiped away a tear that had trickled down her cheek.

“Here.” Travis, the groom’s twin brother, held out a handkerchief monogrammed with T.J.W.
“Thanks.” Angel accepted the finely pressed linen and dabbed her eyes.

The groom cupped his bride’s face, lovingly gazed into her eyes, and whispered, “I love you.” Trent pressed his lips to Sabrina’s with such passion and tenderness.

Fireworks flashed through the stained glass windows as midnight welcomed the New Year. The timing couldn’t have been more perfect.

“That was so beautiful.” She sniffled, her eyes prickling with tears.

“I agree. It’s nice to see he finally found someone that makes him happy.” Travis put his fingers to his lips and let out a whistle that pierced the air and echoed off the slate walls.

Looking as if he’d just stepped off a GQ cover, Travis wore a midnight blue, pinstriped suit with a white shirt and baby blue tie. The pretentious snob Sabrina had described would never whistle like that. The Travis Wellington Sabrina had told her about wasn’t someone she’d ever be interested in, though this man certainly piqued her curiosity.

Men were out of bounds. She’d sworn off them permanently. So what if the guy was double-fudge-cupcake-delectable? Good lord, he was positively yummy.

She was in the middle of wiping another tear from her face when Travis lifted and twirled her around. She’d almost poked herself in the eye. What a jerk.

“Happy New Year.” He kissed her and released her just as quickly then resumed clapping, but his gaze never left hers. His voice was magnetic. Even deeper than Trent’s. Talk about sexy.

“Happy New Year.” She didn’t know if she should look away, sit down, or kiss him back. Too late. She couldn’t do a damn thing but gawk. Angel sucked in a deep, shaky breath. Her finger trembled as she touched her lips to tamp out the flames. She willed her body to behave. Instead her heartbeat sped up, heat flushed over her face, and tingles ran through her, headed straight at her girly parts.

He whirled her around again, but this time he didn’t let go. “Come on. Let’s go congratulate the happy couple.”

Between the woodsy pine scent of the forest outside and the spicy cologne he wore, she felt like a lust zombie incapable of resisting his magic lips.

The guy was a passion tsunami about to wash her completely away. His hot fudge brown eyes, wavy brown hair, naturally sun-soaked, reminded her of a Malibu surfer. The rest of him was equally delicious. He was easily six feet tall to her five foot eight in four-inch heels. 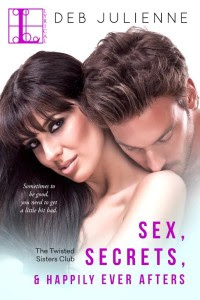 Angel Talbot is anything but pure—in fact some might even consider her a bit wicked. How else would you describe the manager of an ‘adults only’ store that specializes in helping ladies find that special O. But Angel could use a hand herself. Or two. That is until she stumbles into sexy businessman Travis Wellington.

When the Wellington Family had a problem, they sent Travis to fix it. Being the CEO of his family’s multi-million dollar enterprise means Travis is used to getting his hands dirty. But the pressure of looking out for the company, along with his family’s well-being was beginning to take its toll . . . until he found his Angel…

NOTE: I WILL BE DONATING HALF THE PROCEEDS OF BOOK 1: SEX, LIES, AND BEAUTY AIDS AND BOOK 2: SEX, SECRETS, & HAPPILY EVER AFTERS TO PAUL WALKER’S CHARITY ROWW (REACH OUT WORLDWIDE).

While some say truth is stranger than fiction, Deb Julienne’s experience runs more along the lines of a slap-stick comedy. When life tosses you lemons the only thing to do is to turn it into Limoncello.

Her life, like her comedies, has been one big fat romantic comedy…or errors. It’s not a matter of “if” it can go wrong, but how bad when it does happen, and make no mistake…it will. Survival with a sense of humor is the goal.

Joking aside, Deb’s dream of being published came true with the release of her first book, Sex, Lies, and Beauty Aids which was released March 2014. Since then she’s added to more to her collection of tales. Sex, Secrets, & Happily Ever Afters, and A Splash of Romance in the Crashing into Love Anthology.

As a long time member of both Romance Writers of America (RWA) and her local RWA Chapter, the Sacramento Valley Roses, she fills the hours she’s not writing romantic comedy and romantic suspense with her day job at a Silicon Valley Corporation, playing in the kitchen concocting her award-winning jams, jellies, preserves, and sauces (with alcohol of course).

Born and raised in San Jose, California, she now resides in the Tahoe National Forest Basin, her own little bit of heaven on Earth, with her husband of 34 years, their three

A Splash of Romance in the Crashing into Love Anthology