If someone described me in a single word, they’d probably say I’m practical. In my single days, that trait even carried into my dating life.

They don’t say those three magic words until an appropriate amount of time has passed.
And they certainly don’t believe in love at first sight.

Then I met my husband. At a Halloween party held in a large banquet hall, while I fiddled with the boa of my flapper costume, I caught a glimpse of a pirate who had a smile that warmed something inside my heart. I turned to my friend and said, “I need to meet that pirate.”

But the party continued and I lost track of the pirate’s whereabouts. At one point, my friend encouraged me to go with her out to the dance floor. As I walked toward the dancing crowd, the pirate was on his way out of it.

And for some reason, we both stopped and stared at each other.

“Want to dance,” he yelled over the loud music.

I nodded, speechless for once. We danced. We talked. The night went quickly, and I gave him my phone number when I left. Our first official date was a week later.

The next morning I called my mother and said, “Mom, I’ve met the one…” That was twenty-eight years ago and his smile still makes me feel good. 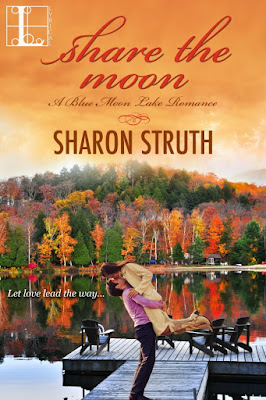 In book one of the Blue Moon Lake Romances, SHARE THE MOON, hero Duncan Jamieson felt exactly the same way when he meets Sophie Moore, only he’s a young teenager. Decades later, they meet again and his feelings really haven’t changed. In this excerpt, he recalls the first time he saw her...

Later they’d returned to the tackle shop for a cold soda. A pretty girl his age stood in the back loading Coke bottles into an old boxy refrigerator. Her flowing hair had caressed her shoulders, almost like the wild branches lining the trail they’d taken that morning to reach their fishing spot on the river. Cut-off denim shorts and a black, fitted Led Zeppelin T-shirt had disclosed the start of her womanly curves, a far cry from the outfits worn by the girls at the private school he’d attended. Duncan had peeked from behind a rack of fishing vests, rendered as debilitated as a stunned fish.

She’d appeared a minute later and dumped the bottles on the counter.

An unforeseen force, one he’d never experienced in his life, generated a magnetic pull, leading him to the back of the store. He’d loitered around a display of rods and feigned interest but covertly observed her every move.

Sophie had bent down and lifted a bottle from the case. Instead of stacking it with the others, she’d twisted around and smiled at him. “Hi. First summer here?”

“Good,” he’d mumbled, dumbstruck by his own desires.

“Yesterday morning I caught a bunch of small-mouth bass below the dam. A little past the bridge. They’re pretty good fighters.”

Sophie’s eyes had swum with playful brightness. “You might want to give ’em a try if you go out tomorrow. That is, if you think you can handle them.” Her voice had teased with the sweetness of honeysuckle.

Desire had snared his hormone-laden body, leaving it vacant of words.

Do you believe in love at first sight? 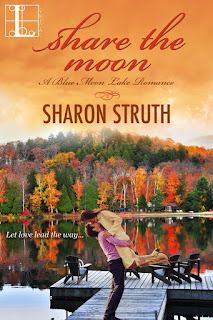 Sometimes trust is the toughest lesson to learn.

Sophie Shaw is days away from signing a contract that will fulfill her dream of owning a vineyard. For her, it’s a chance to restart her life and put past tragedies to rest. But Duncan Jamieson’s counter offer blows hers out to sea.

Duncan still finds Sophie as appealing as he had during boyhood vacations to the lake. Older and wiser now, he has his own reasons for wanting the land. His offer, however, hinges on a zoning change approval.

Bribery rumors threaten the deal and make Sophie wary of Duncan, yet she cannot deny his appeal. When her journalistic research uncovers a Jamieson family secret, trust becomes the hardest lesson for them both.

“Sharon Struth has woven a tale of suspicion, mystery and the complete emotional breakdown of two people searching for love and restoration of their past lives. The plot is refreshing and will definitely keep the reader turning page after page. SHARE
THE MOON is a book that restores faith in human nature and the ability to again find love.” –Fresh Fiction

About the Author:
Sharon Struth is an award-winning author who believes it’s never too late for a second chance in love or life. When she’s not writing, she and her husband happily sip their way through the scenic towns of the Connecticut Wine Trail. Sharon writes from the small town of Bethel, Connecticut, the friendliest place she’s ever lived.

SHARE THE MOON, book one in the Blue Moon Lake Romances, is a finalist for a RONE Award and a Chatelaine Award for Romantic Fiction!

For more information, including where to find buy links to her novels and published essays, please visit her at the following places: