Congratulations to "Tammy Y.", the winner in Robin's giveaway. Thank you to all who participated!

Music.  Along with the character sketches, the setting, the plotting, I need music to set the tone for my books. I set up a playlist (that you can always listen to on my website) and I listen to it as I write the book and spin out the words. Each scene, turning point and the overall theme of he book is linked to music.

As a musician and singer, I don't know if I could write without music. In fact, I’ve tried to start writing a book without a playlist and it’s been a no-go.  I think it’s just such an integral part of my process that I can’t skip it. When I was writing THE PRINCE’S RUNAWAY LOVER, I had my trusty playlist by my side.

Here are several of the songs that really moved me:

1.       What We Ain’t Got by Jake Owen:  A song about loss and learning to love what you have instead of longing for what you don’t have and will never have. Prince Nick and Isabel are both grieving the loss of things that are precious to them in this book and reconciling their future is part of their individual and collective journey.

2.       I Shall Believe by Sheryl Crow:  A song about unfailing and unwavering belief in another person even when it looks like you don't have any reason to do it. Nick needs the people of Callanos to believe in him and he gives his complete support to Isabel even though he knows she has secrets.

3.       Can’t Stop Loving You by Sara Evans: An upbeat song about the heart wanting what the heart wants and hanging on. Nick knows that Isabel is the absolute wrong person for him and he knows that loving her could cost him the throne¼but he can’t stop.

4.       Kiss You Tonight by David Nail:  Oh¼that time when just being with that person can make everything okay and right in your world. When it all comes down to one simple connection between two hearts and nothing will ever be the same again.

5.       Want To by Sugarland: Standing on the precipice of choice¾one way or another and it will change your life. But when you know that your decision is made and that you just need the courage to make the leap¼that is what love is every time.

Giveaway:
I’ll give away a $5 iTunes GC to a commenter who tells me what your favorite love song is. Go! 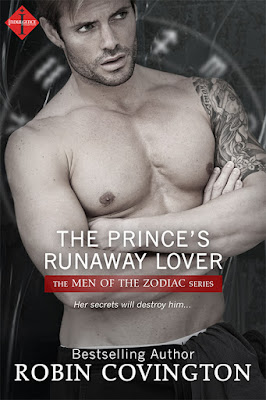 Crown Prince Nicholas Lytton was never supposed to be ruler of Callanos. He was the “spare to the heir,” pursuing a decadent life of the rich and royal—extreme sports, physical pleasures, and glorious irresponsibility. Until his brother died. Now Nick is to be coronated king, and no one believes he's ready.

The best way to secure his crown is to do the unthinkable…find a queen.

While Isabel Reynolds works in the palace gardens, she has no desire to draw the attention of the way-too-flirty, would-be king. For she's not the woman everyone thinks she is. Even if she wanted—or was tempted by—the promise of love, it would only end in disaster. Because while Isabel may be able to catch a king, her secrets would only destroy him…

She lives in Maryland with her handsome husband, her two brilliant children (they get it from her, of course!), and her beloved furbabies.

Drop her a line at robin@robincovingtonromance.com - she always writes back.
Social Media Links:

Giveaway ends 11:59pm EST July 17th. Please supply your email in the post. You may use spaces or full text for security. (ex. jsmith at gmail dot com) If you do not wish to supply your email, or have trouble posting, please email maureen@JustContemporaryRomance.com with a subject title of JCR GIVEAWAY to be entered in the current giveaway. There may be delays in announcing the winner of this giveaway.