SING TO ME, SWEET MUSE OF MUSIC

Congratulations to "Taurus", the winner in MJ's giveaway. Thank you to all who participated. 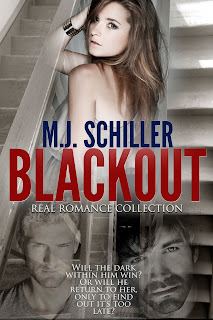 It may be fairly obvious that music has inspired much of my ROCKING ROMANCE COLLECTION (romantic suspense). But what inspired my new contemporary romance, BLACKOUT? Well for this karaoking, concert-going gal, my mind never strays too far from music and writing.

Recently I dropped off my car at a local car dealership for some work and was riding their shuttle van home. When the lady joining me told the shuttle driver her name, I had to give her a second look. Ironically, she happened to be a woman who had trained with my husband when he started his first job over twenty five years ago. We had some catching up to do! When I told her about my writing career the driver perked up, asking that question we writers get all the time. “Where do you get your ideas?” Those who don’t write seem endlessly fascinated by how these stories just pop up in our heads. Those who do write know there is no end to the stories running through our minds, just not enough time to write them all down.

Case in point, BLACKOUT.  It was inspired by a couple of songs, The Gin Blossom’s “Hold Me Down,” and Stain’s “It’s Been Awhile.” First off, these are two awesome songs that both capture perfectly that haunting feeling of wishing you could take back your mistakes. Both are about addiction and how it hurts the people around you, the people you love. We all know that feeling of regret. Sometimes it’s for a little thing. An unkind word that slips past your lips. An opportunity you let pass you by. Sometimes the regret becomes a living, breathing thing in your life, a feeling that clutches at your chest and rips your stomach out with each breath. Why’d I do that? If only I could take it back. Why can’t I ever change?
I feel so sorry for the guy in “Hold Me Down.” The opening line says something to the effect of, well I guess I must have been dreaming when I thought I heard myself say no because now the host is handing me a brew. Even when he’s trying to do what is right, things work against him. I love the line about being in the company of strangers, or just the strangers you call friends. Logically, I guess, when someone has an addiction, he or she is going to end up hanging out with other addicts, perhaps in some pretty shallow relationships. And like two drowning men, they are going to pull each other down. It makes me feel so sad for him when he clearly has the desire to change his life, but can’t quite pull it off. Eli is like this in BLACKOUT, and it’s one of his “friends” that drags him back down the path he has abandoned. 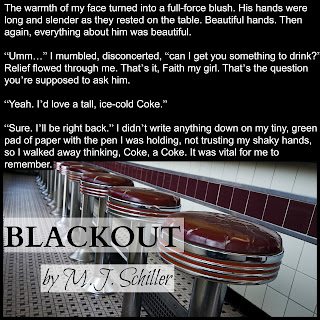 “It’s Been Awhile” focuses more on the effects addiction has on the people around you. One line in particular inspired part of my story, when the artist says he can’t blame his addiction on his father. He realizes his father did his best. He sounds like someone who’s had the benefit of time to come to understand even when someone does a bad job of raising their kids, sometimes it is still the best job they can do. That line made me think and as a result Eli’s father does something that leads to a lot of his son’s issues. Another line says it’s been awhile since the speaker has said sorry. Like saying sorry is something he’s done a lot, a natural consequence of making mistakes. Eli finds himself in the same boat. Saying sorry over and over again when he slips. The dread, then, for someone in this situation is the time when sorry just isn’t enough. When the mistake is too big. When you ruin everything.

Another song, Passenger’s “Let Her Go,” has inspired me in retrospect. You say that is not possible? Just go with me on this. ;) It talks about staring into an empty glass and having to let someone go for their own good, and how much that hurts. That is a decision that Eli is faced with. To give you a better idea of what I’m talking about, here’s a blurb for BLACKOUT:

He’s good looking, but not an absolute knockout. With Max’s charm though, he could have any woman he wants. Once he meets Faith, he doesn’t want anyone else.

Eli. He is a knockout.

But a dark past shadows him and holds him captive. Drinking dulls the pain, but meeting Faith makes him want to change all that.

Faith. She loves them both.

When a blackout brings her together with Eli, she’s happier than she’s ever been before. When another blackout tears them apart, Max is there to pick up the pieces. But can she forget the man who first made her whole?

Excerpt ~
She was as much of a breath of fresh air as the breeze blowing down the street that day, pushing against her stained apron. She possessed an amazing natural beauty, a soapy-clean kind of sexy that radiated out from behind the “Hello, my name is FAITH, I’ll be your server today,” name tag on her high, firm chest. Her long, silky hair drifted to me in my dreams. But it was her eyes that did me in. A flash of green behind the kind of curling lashes which didn’t need to be batted to be shown off.
I think Eli was smitten by her on that first day, too, and so we began to search her out, both of us from our eagle-eye perches far above the street.
Only, it was Eli who had the good fortune to be with her during the blackout. How I wished it would have been different.

So my shuttle driver told me there was a song that always made him think, Bob Seger’s “Turn the Page.” Great song, by the way. What songs get your imagination going? Join our conversation below and also enter for a chance to win one of two e-copies of my rocker romantic suspense, BETWEEN ROCK AND A HARD PLACE!

Bio ~
M.J. Schiller is a lunch lady/romance-romantic suspense writer. She enjoys writing novels whose characters include rock stars, desert princes, teachers, futuristic Knights, construction workers, cops, and a wide variety of others. In her mind everybody has a romance. She is the mother of a twenty-year-old and three eighteen-year-olds. That's right, triplets! So having recently taught four children to drive, she likes to escape from life on occasion by pretending to be a rock star at karaoke. However…you won’t be seeing her name on any record labels soon.

Giveaway ends 11:59pm EST July 12th. Please supply your email in the post. You may use spaces or full text for security. (ex. jsmith at gmail dot com) If you do not wish to supply your email, or have trouble posting, please email maureen@JustContemporaryRomance.com with a subject title of JCR GIVEAWAY to be entered in the current giveaway. There may be delays in announcing the winner of this giveaway.