My new book, DRUNK ON YOU, opens with the heroine as a highly optimistic (or maybe it’s deluded) high school graduate waiting at an airport gate for the marine she’s desperately in love with to come home—and, well, it doesn’t go quite the way she expected.  Instead, it becomes the most cringe-worthy experience of her young life.

I had a really tough time coming up with that scene, because I’ve spent most of my life going “Yeah, I meant to do that,” when I dropped a tray of dishes in the cafeteria, or pretending that it wasn’t me who burped loud enough to wake the dead in the middle of a funeral.

I worry that someone’s going to revoke my Woman card because I HATE to ask directions. Ugh. The day that phones came with GPS’s was the day that the committee in my head finally got to go on vacation with me, instead of having to read maps the whole time so I wouldn’t have to admit that I didn’t know where I was.

Allie’s little snafu in the Louisville airport sticks with her for a long, long time, and almost wrecks her chances to discover that her marine deserves a second look. I feel fairly certain that I’ll never see porn-sailor again, so I can just put that pink-face (blue light, red law, WHATEVER) memory back in the storage shed. 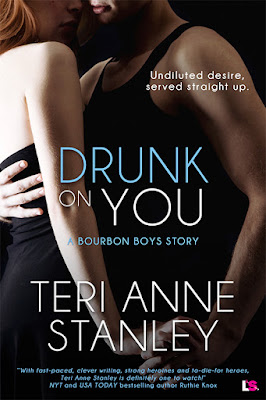 Justin Morgan would happily drown the pain of his injured leg—and the guilt he brought back from Afghanistan—in bourbon. Except, there won’t be any booze if he doesn’t rescue his family’s century-old distillery from financial ruin. The problem? Allie McGrath—youngest daughter of the distillery’s co-owners, and the one woman he can’t have.

Allie has been in love with Justin since…well, she's always been in love with him. Now he's home, broken up over the death of her brother, and he needs help. She can fix the distillery—she’s sure of it—but no one’s taking her or her sweet new idea seriously. Convincing Justin is her only hope.

Allie is more tempting than Justin expected, threatening a promise he swore he’d never break. If he can’t keep their attraction under control, there’s a solid chance they’ll send the whole enterprise crumbling to the ground…if he doesn’t crash and burn first.

She's also worked as a fashion designer for female body builders and a sex therapist for rats. In her spare time, she’s a neuroscience research assistant. Along with a variety of offspring and dogs, she and Mr. Stanley live just outside of Sugartit, which is—honest to God—between Beaverlick and Rabbit Hash, Kentucky.
Posted by Maureen A. Miller at 12:30 AM