Diversity where you least expect it

Congratulations to "Jo-Anne", the winner in Alexia's giveaway. Thank you to all who participated!

My goal as a writer is to write stories with ethnically diverse characters set in exotic locations around the globe. So I’m always on the lookout for story inspiration from global sources. However a few years ago my son went to visit my brother in Manitoba (a province in Canada), a place where I lived for eight years. When my son returned he showed me his photos. One was taken from the window of my brother’s office building. All you could see for miles was flat, flat land—the horizon a line far in the distance. My heart started to pound and my mouth went dry. Manitoba. There’s a reason I haven’t been back in 18 years. Immediately I imagined a heroine experiencing the same trepidation I felt.

But how could I write an ethnically diverse romance set in the middle of Canada? Well, I thought back to the years I lived there and the vibrant Icelandic community in the Interlake region. Some were fairly new immigrants, some had lived there for generations, yet they kept their heritage and culture alive. But I also needed a character who hadn’t been born there, who had come later in life, as I had, and faced the task of integrating herself into this tight-knit community. Analise was created, a young French girl who was sent to live with her Icelandic-Canadian grandparents following the death of her mother.

No love story is complete without a hero. Erik is the long-term resident, born and raised in Manitoba from a family who have lived there for generations and filled the country with their progeny. For him the issue is not integrating into society but distinguishing himself within his family, living his own dreams and not simply doing what everyone before him has done. Erik is a mix of both the Icelandic and Ukrainian cultures that dominate the area. So, while I may not have achieved my goal of an exotic location (unless of course you’ve never been to the prairie then maybe it is exotic to you) I did manage to incorporate ethnically diverse characters in my story.

In writing this story, set in an area where I lived for many years, I found it easy to once again immerse myself in the local vibe. I remembered the quintessential small-town feel where everyone knows almost everyone. Where a quick trip to the store can take hours because you run into at least a dozen people and have to stop and talk. I relived the fun of Islendingadagurinn (Icelandic festival days) when the carnival arrived and for three days the tiny town of Gimli became a mecca of fun.

Here’s a tiny snippet of Analise and her grandfather Gunnar spending time at the festival:

After wandering around the sand sculptures, they returned to the stage area where students were reciting Icelandic stories. Gunnar sat and closed his eyes, a look of contentment on his face. Even after all these years living in Canada, speaking English, it must have felt like home to hear his native language spoken, even if by amateurs.
Her father, when he was around during her first fifteen years in France, spoke French, and her mother spoke only English. Yet it was hearing Icelandic, the language that her grandparents had used when they didn’t think she was listening, that made her feel at home. She’d never learned it beyond a few basic expressions, but it always soothed her soul. Probably because she associated the language with love.
She took her grandfather’s rough hand in hers and closed her eyes as well, letting the reading flow over her like a warm bath. The next thing she knew, her head was pulled gently onto a large shoulder, and a strong arm wrapped around her, supporting her weight. Her eyelids felt as though they were weighted when she tried to open them. Erik’s deep voice filled her mind. “Rest, my darling. I’ll hold you until you wake.”
Home.

Thank you for taking the time out of your busy day to read my post. Are you a small town or big city person?

Giveaway:
I’ll give away a $5 Amazon gift card to someone who comments on this post or is signed up for my monthly newsletter (see website: http://alexia-adams.com). Sign up and comment for twice the chance to win. Winner will be drawn by entering all names into Random.org on Wednesday, July 15 at 10am PDT.

Short Bio:
Alexia once traveled the world, meeting new people, experiencing new sights and tastes. She’s lived in Canada, New Zealand, Australia, England, and France, as well as spent time in Panama and Russia. When life demanded that she stay rooted in one place, she took to vicarious voyages through the characters she created in her romance novels. Her stories reflect her love of travel and feature locations as diverse as the wind-swept prairies of Canada to hot and humid cities in Asia. To discover other books written by Alexia or read her blog on inspirational destinations, Journey to Love at http://Alexia-Adams.com and sign up for her newsletter to keep up-to-date with new books and adventures. 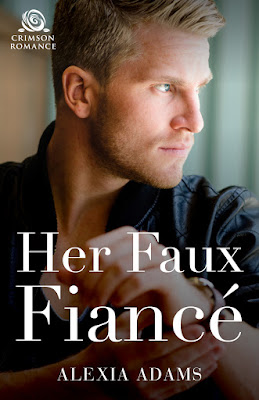 As a combat photographer, Analise Thordarson has seen things through her lens that no one should. But it's the personal losses that brought her home to Canada and her widowed grandfather, whose stables are facing foreclosure.

Hotshot corporate lawyer Erik Sigurdson breezes into town with two things on his agenda: to avenge his sister's death and survive a two-week family reunion. Reuniting with his ex, Analise, is not part of the plan, but she just might be his salvation.

If she'll pretend to be his fiancee, he'll lend her the money to pay off her grandfather's debts. But when their fake engagement is complicated by a very real pregnancy, Analise and Erik must sort out just who is using whom and if this faux relationship could lead to a real future.