Congratulations to "Debbie U.", the winner in Fiona's giveaway. Thank you to all who participated! 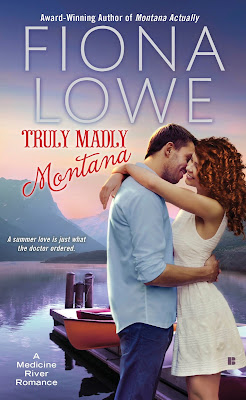 Welcome back to Bear Paw Montana. I've had a lot of fun creating this town and the townsfolk, especially the minor character of Bethany. Every town has a Bethany. Big, loud and opinionated, she calls a spade a shovel. She runs the Bear Paw Medical Clinic with a rod of iron and just when you're despairing, she shows the occasional moments of understanding, but not often enough that you can depend on it. Mostly, she's just abrasive.

"Doctor Bartlett, no one can understand that accent of yours," Bethany said, plucking the microphone out of his hand and raising it to her mouth. "Attention, everyone. The winner of the prestigious Bear Paw chili cook-off is Bethany Jacobson. That's three years in a row, people."

Millie Switkowski grew up in Bear Paw and although she lives out of town for nine months of the year while she is at college, she comes home to work for the summer. Although she loves being home and being treated like one of the guys, it comes with a bit too much familiarity and a step back into old perceptions.

The good and the bad thing about Bear Paw was that most of the older residents and anyone she’d gone to high school with knew she was diabetic. They didn’t comment if she ate at a different time from them although they often had an opinion about what she ate. As a result, in her life outside of Bear Paw as a medical student, she only shared her lack of a functioning pancreas with people on a strictly needs-to-know basis. She made sure that need didn’t arise very often at all because she had a PhD in horrified and pitying looks or worse yet—over-intrusive interest from people who saw her as a training specimen. All she wanted was to be known as Millie—although she wasn’t exactly certain who that was but tonight wasn’t the time to tackle that particular chestnut.

Millie carries a mantle of guilt; some of it self inflicted by past behaviors, but a lot of it comes from knowing no matter how hard she works at trying to maintain her blood sugar within normal limits, she is a constant source of worry to her family.  Coming home always exacerbates these feelings. This summer she plans to throw herself into work but even that isn't going smoothly when she discovers her supervising physician is Will Bartlett.

Last year, she’d liked the Aussie MontMedAir doctor just a little too much. Heat burned her cheeks at the embarrassing recollections. Having a crush at sixteen was normal; crushing on a work colleague at twenty-six probably got a listing in DSM-5. The memory of last spring and summer was still excruciatingly embarrassing given he’d barely noticed her other than one of many people he came into contact with through work.

Following him on Twitter and pretending it was because of his #FOAMed tweets—free open access meducation—was borderline stalker behavior, although totally educational. What the guy didn’t know about emergency airway management wasn’t worth knowing. At least she’d come to her senses before clicking on add friend on his Facebook account and for that, she was both proud and grateful. Sadly, she’d undone that bit of clear thinking after a traumatic medical evacuation last August.

Will Bartlett is on the run from his own life and he figured if he left Australia, he'd leave behind the suffocating effects of grief. Yeah, in typical bloke style, he got that very wrong.  But he knows all about small town life having grown up in Outback Australia so he's happy to be Josh Stanton's honeymoon relief doctor and he's happy to see easy-going, Millie again.

"Mind if I join you?"
Millie's head shot up so fast that her kamikaze curls bounced across her eyes, which although mostly a green had an unusual ring of coppery-brown around the iris. She quickly slid the device she was holding into her pocket and he caught a flash of pink in the glow from the cluster of tea lights on the center of the table. Funny. He’d never have picked Millie for a pink girl. Come to think of it, he’d never thought about her in terms of femininity at all. Millie was just…Millie. Unprepossessing. Ordinary even.
A flash of a memory from last year flared. Not totally ordinary. She's got a dimple-cute smile.
Only, she wasn’t smiling now. In fact she looked slightly taken aback. "Really? You want to sit?"
The nurses were bearing down on him fast. "Really."
"Okay, I guess."
It wasn’t the most welcoming invitation he’d ever received, but he took it anyway.

So what happens when you take a guy who believes he can't keep anyone he loves safe and match him with Millie who believes she is too much of a risk to love?  A whole lot of laughter and a fair amount of tears. 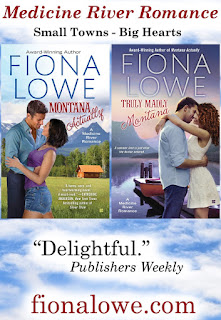 Truly Madly Montana also has a secondary romance between Bear Paw's new female deputy sheriff and the town's male librarian. Tara is finding life in Bear Paw dangerously quiet to her state of mind after years of living in a domestic warzone as well as a physical warzone in Afghanistan. Ethan, Bear Paw's hipster librarian, is an anathema to her but there is something about him that scares her more than a mortar attack. Ethan and Tara have a slow burn romance that involves a Fourth of July parade, a stint in the holding cells and some old fashioned dancing.

You may need a box of tissues next to you while you read this book but I promise you that at the end of Truly Madly Montana you will have a sense of hope and the feeling that no matter how hard life can be at times, hope and love carry us through.

RT Magazine has given it 4* :-) "Lowe’s storytelling infuses contemporary romance with delightful banter. Will and Millie are an adorable pair with infectious chemistry. Lowe’s knack for creating characters who are genuine, everyday people who readers can relate to is the strength of this delightfully modern story."

Are you tempted? Read an excerpt here. 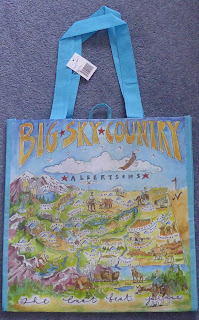 Giveaway:
I have a little giveaway—this awesomely cute Big Sky Country enviro shopping bag. :) To go into the drawing, leave a comment telling me one of your favorite summer activities.

Sexy and charming Australian doctor Will Bartlett will do anything to help out a friend, even if it means moving to Bear Paw for the summer. Some small-town hospitality, and the uncomplicated friendship of his co-worker, Millie, is just the ticket to shake off the restlessness that’s been gripping him lately.

Millie Switkowski, RN and medical student, is home for her clinical rotation, and she’s determined to make this summer so much better than last. She’s got a year of medical school under her belt, her diabetes is under control and she’s kicked her crazy crush for Will Bartlett, who only ever treated her as “one of the guys.”

But when Will turns out to be Millie’s supervising physician, without warning the summer gets a whole lot hotter than either of them anticipated. With both of them holding onto thorny secrets, can they walk away with their hearts intact?

Giveaway ends 11:59pm EST July 9th. Please supply your email in the post. You may use spaces or full text for security. (ex. jsmith at gmail dot com) If you do not wish to supply your email, or have trouble posting, please email maureen@JustContemporaryRomance.com with a subject title of JCR GIVEAWAY to be entered in the current giveaway.