What Makes Someone Sexy?

What makes someone sexy?

In an effort to find an answer, I read countless magazine articles and studied several academic research reports. I also posed these questions to friends, family, and the occasional stranger while standing in line at the grocery store. (And yes, most people moved to other lines after I asked.)

Personally, I think a sense of humor is sexy. That is what first attracted me to my husband, and every day he says or does something that cracks me up.

Yet the most common answer I received was confidence… confidence is what makes someone sexy.

But what is confidence, exactly? One definition says it’s “a feeling of self-assurance arising from one’s appreciation of one’s own abilities or qualities.”

When I think about my favorite romance heroes, they’re always confident. Some cross the line from confident to arrogant. Some are even cocky, and yet I still love them. I appreciate the fact that they know who they are… that they’re sure of themselves… that they’re aware of their appeal to the opposite sex. 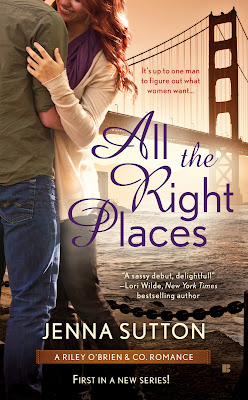 In my debut contemporary romance, All the Right Places, my hero, Quinn O’Brien, has plenty of confidence. He knows exactly who he is and all the blessings he’s received.

“Everything had always come easily to him: grades, sports, women, success, money. With minimal effort, he had obtained things most people wanted desperately but never actually received.”

When my heroine, Amelia Winger, first meets Quinn, his confidence shines brighter than the sun: “She knew she was in trouble when she saw that smile. Oh, yes, Quinn O’Brien was well aware of the effect he had on women. It was a wonder he didn’t swagger.”

Quinn is one of those guys who has always known his place in the world. He’s the great-great grandson of the man who founded Riley O’Brien & Co., the nation’s oldest jeans company. Around the world, people wear the company’s signature jeans, known as Rileys. As an heir to an iconic brand, Quinn has never doubted what he wanted to do with his life, which is work for his family company and eventually take over the reins.

Webster’s definition of confidence is slightly different than other sources: confidence is a “feeling or belief that you can do something well or succeed at something.”

While Quinn might not doubt his looks or his ability to attract women, he still suffers from extreme self-doubt. In All the Right Places, he’s running the company while his dad recovers from cancer, and unfortunately, Quinn needs to make some big decisions about the family business because it’s losing market share to designer denim.

He wonders: “Am I the right person for this job? Am I going to wreck something that took four generations of O’Briens to build? Am I going to destroy my legacy, ruining the chance for my children and grandchildren to be proud of their heritage? Am I going to fail?”

Quinn is petrified of doing something that could hurt Riley O’Brien & Co.—of doing something that could destroy his family legacy. “Hard work didn’t scare him, and he didn’t mind getting down in the trenches with his employees, but was that enough? His life-long confidence had deserted him, and he wasn’t sure he had what it would take to change the direction Riley O’Brien & Co. was heading.”

Real people suffer self-doubt. They don’t always have all the answers or feel 100 percent confident that they’re making the right decisions.

In my opinion, Quinn’s self-doubt—his lack of confidence that he can successfully lead his family company—doesn’t make him less attractive or less appealing. That self-doubt makes him real. It makes him honest and interesting.

And those qualities are definitely sexy.

***
All the Right Places is Jenna Sutton’s debut novel. It is the first book in the Riley O’Brien & Co. series and is available now at:

All the Right Places

The first in a brand new contemporary romance series starring the men and women who are determined to keep the billion-dollar denim dynasty, Riley O’Brien & Co, on top, but aren’t about to let success stand in the way of love…

Amelia Winger is a small-town girl with big dreams of becoming a successful designer. So when she gets a gig designing accessories for denim empire Riley O’Brien & Co., it’s a dream come true. Amelia can handle the demanding job, but she isn’t quite prepared for sexy CEO Quinn O’Brien. She’s doing her best to keep things professional, but the attraction sparking between them makes it personal. And so does the secret project she’s working on behind his back…

Quinn’s not interested in the new accessories, but he is interested in the woman designing them. Amelia is smart, sexy, and talented, and he hasn’t been able to stop thinking about her since they met. Mixing business and pleasure isn’t wise, but that doesn’t stop him from coming up with excuses to spend time with her. He thinks he understands the risk he’s taking when he gets involved with Amelia. But he doesn’t know he’s risking a lot more than his heart.

Giveaway:
Jenna will be giving away two autographed copies of ALL THE RIGHT PLACES to two lucky commenters or email entrants who can tell what they think is sexy, or what they consider to be their imperfections.

Giveaway ends 11:59pm EST June 4th. Please supply your email in the post. You may use spaces or full text for security. (ex. jsmith at gmail dot com) If you do not wish to supply your email, or have trouble posting, please email maureen@JustContemporaryRomance.com with a subject title of JCR GIVEAWAY to be entered in the current giveaway.