I’ve never been a bridesmaid, nor have I attended many weddings. For a long time, the possibility of me tying the knot seemed slim. All my friends had married, divorced, and remarried by the time I’d worn down—I mean, won my husband’s heart and finally made it to the altar. Sure, by then we owned a house, a dog, two cats, a business, and had two kids, but, one can never be too careful when it comes to shackling themselves to the person they plan on spending the rest of their life with.

Sorry if that didn’t sound very romantic, but let’s face it, fairytale fantasies quickly fade to reality after the thank you cards are sent and the honeymoon is over. That’s why I’m here—to gift you with my six pearls of wisdom about making marriage work.

1. You’re not going to change him—much. Sure, you might be able to banish a few of his idiosyncrasies, but the majority of his annoying habits won’t budge. So make sure his love for all things NASCAR won’t make you want to smother him in his sleep.

2. Just do it. Fart in front of him as soon as possible. Pretending that you don’t pass gas is a waste of time. First off, he knows you do it. You’re not fooling him. Secondly, do you really want to fight that for the next fifty years? I say own it. That goes for peeing in front of him as well.

3. On the opposite side of that coin is not getting too comfortable. There are somethings he just doesn’t need to see. Struggling into your Spanx, the mechanics of feminine products, etc. Keep a little mystery for everybody’s sake.

4. Fact: Men aren’t complex creatures. They can’t read your mind. More than likely his deep look of pondering has nothing to do with your relationship and everything to do with whether or not he should put cheese on his sandwich. A short and to the point request will get you a faster response than explaining your reasoning and feelings about why you need the step ladder out of the shed. Actually, you can probably just grunt and point and he’ll get it.

5. Know this, if you complain to him about anything, your job, not knowing what to have for dinner, your hair, he’s going to try and fix it—unless it’s about your relationship, then he’ll suddenly need to clean the gutters. Men don’t understand that sometimes we just want to vent. They’re not programmed for that. That’s what girlfriends are for.

6. Last but not least, don’t sweat human nature. Men are going to look at other women, and if you think you’re guy isn’t, you’re naïve. That doesn’t mean he loves you any less. And can any of us deny the pleasure we get one of those hot guy photos posted on Facebook? I think not. My motto is, until my husband gives me something to worry about, I’m not going to worry.

After being together for over twenty years, he still tries to lure me into our bedroom with promises he may or may not be able to keep. The best part? I still want to let him try. 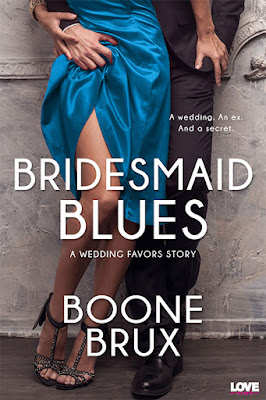 Maid-of-Honor Dani Brown can handle anything that comes her way when it comes to her best friend’s wedding. That is, until the bride asks for a huge favor—Dani needs to distract the best man, who happens to be Dani's ex. The ex she has fantasized dismembering for a year now. The ex she’ll have to suck it up and play nice with if this wedding is to go off without a hitch.

Businessman Jamie Kingsland is back in Seattle for a wedding. There’s just one problem – the maid of honor wants him dead. Except she doesn’t. Even though he knows he broke her heart last year when things got too serious and he panicked and left, she’s being way too nice about it now. And it scares him.

Something is up with his favorite bridesmaid, and he’s determined to find out what…
Find it online:

About Boone Brux:
As a multi-published and an award winning writer, Boone's books drips with experiences from real life. Addicted to anything that might make a good story, she weaves tales that range from dark fantasy to humorous romance. Settled in the icy regions of Alaska with the love of her life and twin daughters, it's not uncommon to find her tapping away on her iPad on a windy beach or the barren tundra. Be warned, anyone and every even is fodder for one of Boone's novels.