Congratulations to "Emily B.", the winner in Barbara's giveaway. Thank you to all who participated!


It takes all kinds to make a world, or so they say. That’s one of the reasons I love being a romance author:  having the chance to write about many heroes and heroines and secondary characters, all with different backgrounds and interests and goals. For this post, we’re putting an emphasis on different.

There are many well-loved story lines in romance. One of them is the opposites attract tale, where the hero and heroine don’t have much—or maybe anything—in common but still manage to find each other, work their way through to a resolution of their conflicts, and fall in love.

The “opposites attract” story happens often in real life, too. For example, I’m a very big reader, and you’ll find my reading material on the couch, the kitchen table, my nightstand, and in every room in our house. While I read everything from romance, mystery, and biographies down to—yes, I’ll admit it—the backs of cereal boxes, my husband reads the sports pages in the Sunday paper. (And the books I write, of course!)

We know a couple who have very different pastimes. She lives for hobbies such as zip-lining and mountain-biking; he would much rather putter around in their garden. Another couple we know take turns going out together on each of their favorite dates. One night, this couple will dress up, have dinner at a fancy restaurant, and attend the opera or the theatre. Another night, they’ll wear jeans and T-shirts while chowing down on hot wings and drinking beer at the neighborhood bar. 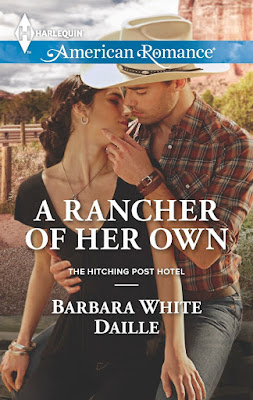 Pete and Jane, the hero and heroine of my upcoming (July) book, A Rancher of Her Own, are as different as night and morning, from their personalities and lifestyles to the people and places that mean the most to them.

Jane’s a city girl, through and through.  She dresses in head-to-toe black, has an exciting job that keeps her on the move to many different cities in many different countries, and if there’s one thing she knows about herself, it’s that she’s not looking for a relationship.

Pete’s a dyed-in-the-wool cowboy who couldn’t care less if he never leaves his small hometown. He’s more than content to stay on the ranch he manages and where he lives with his two young kids. And if there’s one thing he’s certain of, it’s that he won’t get involved with some smart-mouthed city slicker who doesn’t care about having a family.

Sounds like they have every reason not to get together, doesn’t it?  But just as in real life, if this mismatched couple can figure out how to solve their conflicts and meet in the middle…well, they just might have a chance at a happy-ever-after.

Here’s a quick clip for you from the story:

Arms crossed, Pete leaned against the doorframe and watched Jane go up the ladder. “You do realize that sticker on the step you just breezed past says not to climb any higher, right?”

“I need to find the best angle.” She sat astride the top of the ladder, one foot braced on the paint tray. After a few clicks with her camera, she frowned and glanced toward the window near the head of the tub. “Can you move that curtain to one side?”

“The sun’s going down, though, and I want to catch the light streaming in across the bubbles.”

He’d called it right about her liking things just so. He flipped up the bottom of the curtain to loop it over the rod.

Again, she frowned. “Not exactly the effect I was looking for.”

“You really are a perfectionist, aren’t you?”

For a moment, her lips pressed into a tight, straight line. Then she smiled. “You ought to see my hospital corners when I make a bed.”

“Was that an offer?” The words slipped out of his mouth before he’d had a chance to think about the consequences. What was it about Jane that scrambled his brain?

She gave him a slow smile. “Cowboy, if I made you an offer, it would be perfectionistically clear.”

The image that brought to mind left him breathless. He turned and shoved the fabric across the rod, then stood looking through the window. One way or another, he needed to forget these thoughts he was having about her.

Or find out if he actually had seen that spark of interest from her earlier.

Giveaway:
Have you got an opposites attract example from a relationship of your own or of someone you know?  Share it with us, and your name will be tossed in the hat to win one of Barbara’s backlist books.

Abouth the Author:
Barbara White Daille lives with her husband in the sunny Southwest. Though they love the warm winters and the lizards in their front yard, they haven’t gotten used to the scorpions in the bathroom.

Barbara’s new series, The Hitching Post Hotel, features a matchmaking grandpa determined to see his three granddaughters wed. The series began in April 2015 with The Cowboy’s Little Surprise and continues with A Rancher of Her Own in July and The Lawman’s Christmas Proposal in December.

Find A Rancher of Her Own at your favorite booksellers, including: 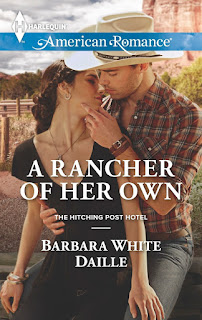 A Rancher of Her Own
Barbara White Daille – July 2015

Ranch manager Pete Brannigan has no interest in playing tour guide to a city slicker like Jane Garland. But spending a few days with the headstrong photographer is a small price to pay for everything her grandfather has given the single dad. Though Pete's drawn to Jane's sharp wit and striking beauty, he won't hurt his young children by falling for another woman who puts her career before family.

Jane's seen the world through her camera…and used it to shield her emotions. With Pete, she can finally let her guard down. If only he could do the same. Despite their powerful bond, Pete still can't trust Jane with his kids or his heart. But if he keeps pushing her away, he may ruin any chance their relationship has to develop.

Giveaway ends 11:59pm EST June 9th. Please supply your email in the post. You may use spaces or full text for security. (ex. jsmith at gmail dot com) If you do not wish to supply your email, or have trouble posting, please email maureen@JustContemporaryRomance.com with a subject title of JCR GIVEAWAY to be entered in the current giveaway. US postal addresses only.