Live on the Edge of Ecstasy 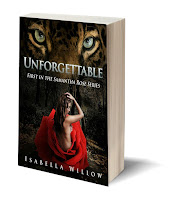 Now You Have 2 Ways To Win With Isabella Willow

For a Limited Time it is only $.99. Leave a review and receive Absolutely FREE
YOUR CHOICE OF 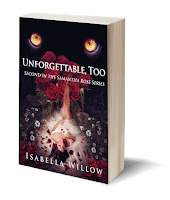 Unforgettable, Too, Second in the Samantha Rose Romantic Suspense Series
…the romantic, sensuous, and sometimes hilarious, saga of Samantha Rose. Escaping from a psychopath she runs to Hollywood, falling in love with rich, powerful men. Her mother interferes from heaven, causing men to become infatuated with her, hoping that they will protect her.
OR:

Or Unexpected Lovers, An Extraordinary Romance upon its release later this month.
Alex Donahue has divorced her husband, Derrick, the sleaziest of sleazy lawyers and taken a job as the foundation director for a large corporation. She never expects to fall in love with her boss, Murphy Finch. She needs her job and he has made it clear that he never becomes involved with employees. When she meets Dr. Tony Rosen she has fun, loves his seduction, and can almost see a future with him. He tells her that he loves her, but she can never say the words back to him. She can’t stop comparing him to Murphy.

SECOND:  SIGN UP for your free subscription to Quickie Short, Short Story Subscription and receive a short story every month. 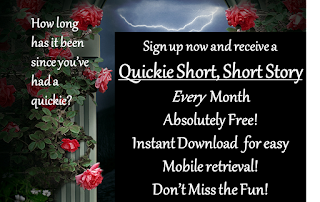 Reward for signing up: Enter a drawing for a $25 Gift Card

See what’s in store for you with your exciting free subscription of the
Quickie Short, Short Story Series
Quickie Schedule:

I have now selected short stories exclusively for you, to take you to the world of romance and imagination. I am happy to share what you’ll receive every month, because everyone needs a quickie.

Molly loved to hike through the woods especially on mornings after a rain, when the light was extraordinarily beautiful. Her favorite thing to do was photography and she had gotten up before dawn to catch the early light.
She discovered a man, Nate, trapped, and badly injured from a rock slide. He was pale and fading in and out. She was terrified that he was dying and help wpuld arrive too late.

“Just keep talking. Are you married?”
“No. You?”
“Nope.”
“Good. ‘Hate to think I’d go through all this, just to meet a beautiful woman, only to find out she’s married.”

For August, 2015 A Summer Scorcher
Heat

Grace’s best friend, Anita, wanted to meet that great guy, get married, and have kids. There was just one problem, Anita lost her sight following an accident.
She didn’t believe that she would ever find that great guy, or get married, or have kids. But Grace wouldn’t give up on her and helped her sign up on an internet dating site.
Steve, the man who seemed most interesting, also seemed to have a problem, something he wouldn’t tell her, and kept referring to his mysterious friend, Michael.
When Anita and Steve finally met there was an instant, powerful attraction. When Grace met Michael, however, there was an instant, surprising heat.

“This is the first time in a very long time I’ve made it out of this house. I have agoraphobia, I wasn’t sure what you’d think.”
“I am so very happy to meet you—that’s what I think,” she said.
After dinner Michael and I watched the sunset.
“I think it’s great what you’ve done for him. Must be hard on your marriage.”
He leaned forward. “Not married,” he whispered. “Your boyfriend must be curious about tonight.”
“’Don’t have one.”
“Imagine that.”
“Imagine that.”

For September, 2015
Once in the Whole Wide World

In the middle of a rain storm a large dog had pushed their back door open, wandered in, and settled down in the middle of Jackie’s bed.
When she and her kids found the grateful owners Jackie was surprised to meet someone who was avoiding dating as much as she was.

“Yes, you and my Marco.  You have given up on love.  He doesn’t date either. Engaged. Then not engaged. We must thank you for saving our Princess, come to our restaurant tonight for dinner…”
Marco came in just as we were about to leave.
“I’m sorry I couldn’t get here earlier,” he said, handing me roses.  “I managed to take off a little early. But, it’s true.  I haven’t dated. I tried…it didn’t feel right.  But if you don’t date then, I thought maybe we could both not date…together.”

Ashley and her sister, Liz, inherited Aunt Sarah’s house, the old Victorian that had been the gathering place for the family. But now Liz was getting married and she and her son, Bobby, would be moving away. Just like Aunt Sarah, Ashley would be alone in this big house.
Bobby was turning sixteen and is an aspiring engineer. For his birthday she went to the hardware store to buy tools for him, and ran into Parker, an old friend. In the midst of Bobby’s birthday party Parker showed up with two gifts, one for Bobby, the other wrapped with a large, satin bow.

“This one, this is chocolate covered strawberries. I thought perhaps we might enjoy them after dinner tonight.”
“I just haven’t dated in a long time.”
“It’s just dinner,” he whispered, “and a few luscious, delicious, irresistible strawberries.”

For November, 2015
The Trouble With Hedges

Bill was a retired FBI agent. He never thought that he would find a dead boy in his hedge, or that the neighborhood would turn to him for help, or that his new, irresistible neighbor would be in his kitchen.

“Hey, FBI, don’t have a heart attack, I’m just making you an omelet,” a female voice yelled up from the kitchen.
He rushed down the stairs, pointing his gun at a woman in a long, swirling skirt cracking eggs into a bowlful of flour.
“Who the hell are you?”
“Sarah Jamieson.”
“What are you doing?”
“What’s it look like I’m doing? Making biscuits. I’m your neighbor Sarah.  And I’m making you a nice breakfast before the block meeting.”
“What block meeting?”
“The block meeting you’re about to have, of course. Smile, your neighbors and future best friends just started up your front steps.” She kissed him letting her breasts brush against him.

For December, 2015
Together Alone

December could not be a worse time to travel but Dana was determined to see her daughter. When she heard the announcement that all flights were cancelled due to a huge winter storm she settled in to wait it out. She never thought she would meet a fellow traveler who would make waiting a very exciting adventure.

Thank you for taking the time to read this. Join me…living on the edge of ecstasy.
Isabella@IsabellaWillow.com
Posted by Maureen A. Miller at 12:30 AM