HAVING YOUR CAKE AND EATING IT, TOO.

Congratulations to "Amy P.", the winner in Jessica's giveaway. Thank you to all who participated!

So happy to be back and blogging at JCR! If you read my last book, Dictatorship of the Dress, you’ll remember Danica James, my heroine’s best friend. My new release, Courtship of the Cake, is her book. As a writer, I worried I had painted myself right into a corner when it came to Dani. She was the calm, cool voice of reason and the person who Laney always ran to for advice. So much so, her tagline became WWDD? – What Would Dani Do?

When it came to writing Dani’s story, I had no idea what to do with such a wise and well-adjusted BFF who seemed to already have the answers when it came to life, love, and all the layers in between. Then I remembered: Dani has a wild streak. And just because she’s the voice of reason for her friends, doesn’t mean she listens to her own advice! She tends to run away from her own issues, blaming it on “wanderlust” – but a fateful (and hilariously awkward) run-in with a notorious rocker on his tour bus changes everything.

Engaged to Nash Drama? The Nash Drama, of Go Get Her fame? My mantra would morph from WWDD to WDDDI. Friends would no longer police themselves in situations by asking What Would Dani Do? They would simply want to know Why Did Dani Do It?

Betrothing myself to one of the country’s cockiest, rowdiest rock stars was hardly a moral imperative.

For better or for worse, for fake or for real, Dani becomes entwined with Nash as he makes his way home to see the friends he abandoned and the young son he never met. But I wanted to throw something sweet and sticky and irresistible her way … and he appeared in the form of Mick Spencer. Now WWDD?

This is not a true love triangle, rest assured. In keeping with the series theme, “Much ‘I Do’ About Nothing”, things aren’t always what they seem. Dani wants to help Nash…but she can’t help having feelings for Mick, the sinfully sweet baker. Dare I say…she wants to have her cake, and eat it too? 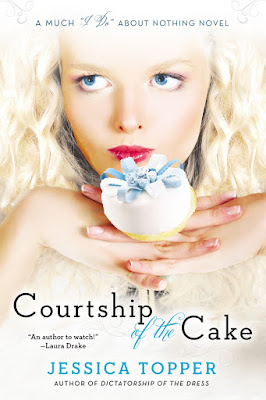 COURTSHIP OF THE CAKE

“Always a bridesmaid, never a bride” has suited Danica James just fine…until the mysterious man who crashed her sister’s wedding steals her heart, leaves a slice of groom’s cake under her pillow, and then disappears.

Hoping to forget her unforgettable fling, Dani takes a job as a backstage masseuse for a rock music festival, not expecting the tour’s headlining bad boy to make an offer she can’t refuse. Nash Drama needs a fiancée—and fast…

Mick Spencer is the best wedding cake designer in New Hope and the town’s most eligible bachelor. But despite the bevy of bridesmaids he’s sampled, Mick can’t get the evening he spent with Dani out of his mind.

So when she shows up for a cake tasting at the Night Kitchen—with his former best friend’s ring on her finger—Mick vows to charm the woman of his dreams into choosing a sweet and sinful ever after, with him…

EXCERPT:
I turned my attention to the daunting cake sample books in front of me. All right. I could do this. Open the damn book, nothing is going to jump out and bite you. The first one I chose unleashed a flurry of loose pictures into my lap. Figures. I leaned to scoop up the few strays that had sifted onto the floor.

“I could see you going with lace. Very delicate. Ultra-feminine.”

Mick stood in front of me, water glass in his hand and a smirk on his face.

“More and more brides are going with lace designs on their cakes these days.” He set the glass down and knelt with me, taking the photos from my hand. “All that is hand-piped. I can duplicate your dress pattern, or . . . make something up from my imagination.”

Those striking blue eyes roamed over mine, lighting a flame in me. I had no doubt I had left little to the imagination, bending over in the low, scooped tank top, which was another item from the hot-wifey dress-up box.

But the frilly push-up bra beneath it was all mine.

“Of course, if that is too much lace for you, you can just slide a layer in between. I’m a fan of layers,” he said, practically undressing me with his eyes.

I readjusted my top and recovered, taking a sip of the infused water he’d delivered. Basil for clarity, I recited to myself, as if choosing the best essential oil for a massage client. Don’t play his mind-in-the-gutter games.

“What happened to that gorgeous cake you had on display the other day?”

“It satisfied approximately eighteen to twenty people,” Mick murmured, crossing his arms and rocking back on his heels, eyes never leaving me. “Although, I saved one piece of it. For you. Care to try?”

And be just another number to ooh and aah over his edibles? Approximately number nineteen to twenty-one? I’m sure he had given up keeping track of whom he satisfied.

“No, thank you. I just came to look today, that’s all.” The bells above the door of the Night Kitchen jangled, reminding us we weren’t alone.

“No harm in just looking,” he murmured in my ear, before turning his attention to his latest customer.

GIVEAWAY:
Let’s talk cake – the real kind!
Leave me a comment and tell me:
• Are you all about the cake, leaving the frosting in a pile on the plate?
• Or is the cake merely a frosting-delivery device for you?
• Maybe you’re an equal opportunity cake-and-frosting lover?
One commenter will be chosen at random to win a signed copy of COURTSHIP OF THE CAKE!

AUTHOR BIO:
Jessica Topper is an ex-librarian turned rock n’ roll number cruncher.
She can trace her love for the written word back to age three, when she memorized Maurice Sendak’s Chicken Soup with Rice in its entirety. By day, she does bookkeeping for touring rock bands. By night, she creates books of her own. She is the author of three novels from Berkley: LOUDER THAN LOVE (September 2013), DICTATORSHIP OF THE DRESS (January 2015) and COURTSHIP OF THE CAKE, the second in her “Much ‘I Do’ About Nothing” series (June 2015). Watch for DEEPER THAN DREAMS, an e-book novella coming in August, and SOFTER THAN STEEL, the second full-length novel in her Love & Steel series, releasing in September.


Giveaway ends 11:59pm EST June 6th. Please supply your email in the post. You may use spaces or full text for security. (ex. jsmith at gmail dot com) If you do not wish to supply your email, or have trouble posting, please email maureen@JustContemporaryRomance.com with a subject title of JCR GIVEAWAY to be entered in the current giveaway.
Posted by Maureen A. Miller at 12:30 AM