The Art of Seduction: Round Two

Congratulations to "Bn100", the winner in Regina's giveaway. Thank you to all who participated!

I’m so excited to be back at Just Contemporary Romance! I was here in September talking about my debut novel, Triple Threat, and it’s hard to believe I’m already back talking about the second book in the Art of Seduction series, Triple Time.

When I sat down to write Triple Threat, I knew I wanted it to be the beginning of something bigger. I love reading series, so it seemed natural to want to write one. As a reader, I like emerging myself into a world – the characters, the settings – and I don’t want that world to end when the book is over. What better way to keep things going than to set another book – or two or three – in that same world, with some of the same characters?

There’s two things that connect the four books in the Art of Seduction series: Each book features one of the Nelson siblings, and each has at least one character with an arts-related profession. In Triple Time, the second book in the series, the Nelson sibling is stuffed-shirt attorney Gabe and his love interest, free-spirited Devin, is the one with a foot in the arts world, as she’s a tattoo artist with dreams of being a painter.

I got to introduce both Gabe and Devin in Triple Threat, and Nick and Holly, the hero and heroine of that book, make a return appearance in Triple Time. I find myself doing a lot of searching in my prior manuscripts as I write, answering questions like: What did I name that bar? Or: Did Gabe have grey eyes or brown eyes? I’ve started a series bible to help me keep track of these things, especially the names and places in the town of Stockton, where the Nelson family is from.

I’m working on the third book, Triple Dare, now. The Nelson sibling in this one is Gabe’s twin, Ivy. She’s a photographer, and while she hasn’t made an appearance in either of the first two books, she’s been a presence in the background. And her guy is her brother’s best friend, Cade, who readers met in both Triple Threat and Triple Time.

The further I get into the series, the more challenging it is to keep things consistent. But it’s a challenge that’s not without its rewards, as I get to keep returning to the Nelsons and their stomping grounds, from New York City to suburban Stockton. I hope readers enjoy the return trips as much as I do. 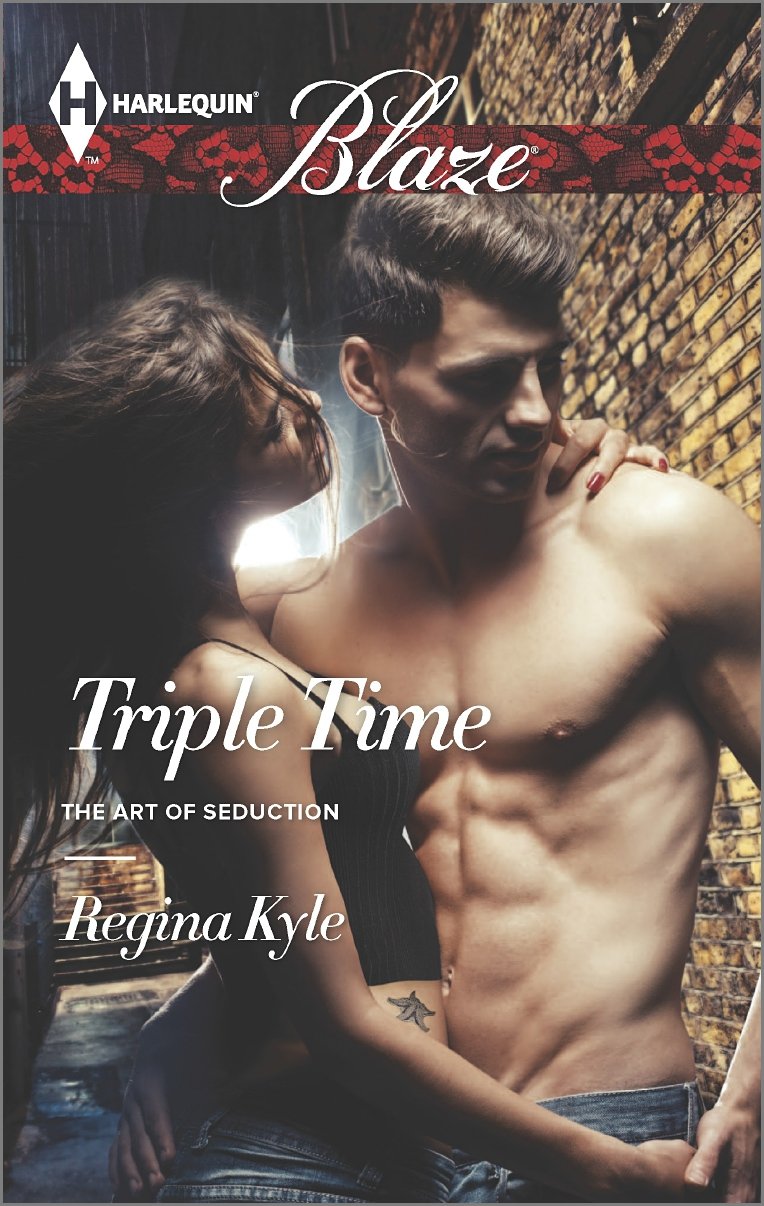 How to unravel your straightlaced lover…

Gabe Nelson would be a great district attorney, but his public image is too boring to get voters' attention. Tattoo artist Devin Padilla can help him show off his fun, sexy side, but she needs something in return—his legal expertise to track down her missing brother. She's not Gabe's type, but they can't keep their hands off each other, whether it's good for his image or not.

At first, Devin thinks she got the easy end of the bargain. Gabe's the sexiest stuffed shirt in Manhattan, and his kisses practically set her on fire. But every deal has its fine print. As their relationship goes from business to pleasure, Devin realizes this one won't cost her soul…it'll just steal her heart.

He checked the clock behind the bar. Where was Devin? He’d never understood why women took so long in the bathroom. What the hell did they do in there, anyway?

“Seriously, Gabe. I’m worried about you.” Kara pulled out the stool next to his and sat, putting a hand on his thigh. Her shiny red nails were a stark contrast to the faded denim of his jeans. “The clothes. That girl you’re with. I wanted to talk to you earlier, but I was afraid she’d come at me with a switchblade.”

Christ, had she always been so judgmental? Yet another flaw he’d overlooked.

“I’m a big boy.” He picked up her hand and removed it from his leg, relieved that he felt nothing when she touched him. “I can take care of myself.”

“Hey, babe.” Devin came up behind him and snaked an arm around his waist. Her hand came to rest on his hip, sending a bolt of white‑hot desire to his groin. “Sorry I got held up. The line was ridiculous. Miss me?”

She reached up on tiptoe and gave him a down‑and dirty, take‑no‑prisoners kiss, with just enough tongue to make it borderline obscene in a public place. He barely had time to reciprocate before she broke it off, sliding down his body and giving him a look that said Sit back and hold on tight. This is gonna be a wild ride. “That’s okay. You don’t have to answer. Your hard‑on speaks for itself.”

Kara gasped, and Gabe almost laughed out loud at the shocked look on her face.

“Are you okay?” Devin took a half step toward the other woman. “I know CPR. And the Heimlich maneuver.” “I’m fine.” Kara held up a hand to stop her. “Thanks.”

“Good.” Devin turned to Gabe and laid a palm on his chest. One finger traced the lettering on his T‑shirt. “What do you say we skip the last stop on the tour and go back to my place? I’ve never been a big fan of E. E. Cummings anyway.”

“I don’t know,” he teased, finally getting the idea and playing along with her. “That Black Label burger sounded awfully good.”

“I promise I’ll make it up to you.” She pressed a kiss to the hollow between his neck and shoulder, making his pulse jump.

“Well, in that case…” He picked Devin’s purse up off the bar and handed it to her. “It’s been nice catching up with you, Kara.”

The polite lie tripped off his tongue. He gave Kara a dismissive nod and put his arm around Devin, shepherding her toward the door. Devin returned the favor by slipping her hand into his pocket and squeezing his ass. His cock twitched and his mind burned with a question only Devin could answer.

Was she serious about going back to her place? Or was it all an act for Kara’s sake?

Giveaway
Do you like reading series? What are some of your favorites? One lucky commenter will win an e-copy of Triple Threat.

About the Author:
Regina Kyle knew she was destined to be an author when she won a writing contest at age ten with a touching tale about a squirrel and a nut pie. By day, she writes dry legal briefs, representing the state in criminal appeals. At night, she writes steamy romance with heart and humor.

A lover of all things theatrical, Regina lives on the Connecticut coast with her husband, teenaged daughter and two melodramatic cats. When she’s not writing, she’s most likely singing, reading, cooking or watching bad reality television. She’s a member of Romance Writers of America and her local RWA chapter. Triple Tine is her second novel. She is also the author of Triple Threat, the first book in her Art of Seduction series for Harlequin Blaze.