Following the path to your dreams after a detour or two

Congratulations to "Laney4", the winner in Sabrina's giveaway. Thank you to all who participated!


I’m very excited and happy to share my new release with you. It’s called DELICIOUS TEMPTATION and it’s a sexy contemporary romance featuring a good girl who wants to be very bad with her brother’s ex-best friend.

And while there are some very steamy scenes and a dirty-talking hero (it’s an Entangled Brazen after all), the heart of DELICIOUS TEMPTATION is really about two people getting their lives back on track and following their dreams.

The story of Eric and Amara really resonated with me since I know a thing or two about overcoming life’s little detours in order to make your dreams come true. Since I can remember, I’ve always wanted to be an author. I was the annoying goody-two-shoes who became excited when the teacher made us write a story using our spelling or vocabulary words for the week.  My love for writing continued through high school and college and eventually I even made a living doing it. But while being a newspaper reporter allowed me to write every day, I wasn’t writing MY stories. Then circumstances changed and I moved into public relations. Again, I wrote pretty much every day, but there was a limit on how creative I could be with press releases.

It wasn’t until about four years ago that I decided to finally listen to the voices in my head. I announced to my husband that I was going to write a book and proceeded to start my first novel. Thousands of words later, it’s still not finished. But along the way, I managed to become published with a different story. And then another one. And then other one…

It wasn’t at all easy. And there were definitely times I thought about giving up. But, in the end, I know all of my hard work and sacrifices have been worth it.

Giveaway:
Do you have a dream that recently came true? Share in the comments below and be entered into a drawing for a $10 Amazon gift card. Don’t forget to include your e-mail address. 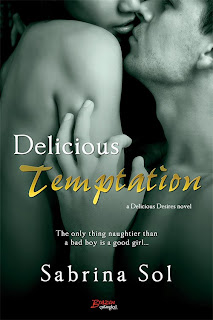 Amara Maria Robles is a good girl. So good that she gave up her dreams of becoming a renowned pastry chef to help her parents with their struggling Mexican bakery. Yet her parents reject any changes she suggests, and refuse to sell her mouth-watering confections. Clearly being a good girl isn't paying off. So when her brother's sexy ex-best friend walks into the bakery, Amara's tempted to be very bad indeed...

After a scandal twelve years ago, resident bad boy Eric Valencia has returned to make things right with his family and friends. One glance at Amara and her wicked curves, however, and Eric finds himself thinking about how she’d feel beneath him—something he promised Amara's brother he would never think about, let alone do.

But this bad boy is in deep trouble...because Amara's determined to have her cake, and Eric, too.

About SABRINA SOL:
Sabrina Sol is the chica who loves love. She writes steamy romance stories featuring smart and sexy Latinas in search of their Happily Ever Afters. She lives in Southern California with her husband, three kids, two Beagles and one Bulldog, and is part of a larger, extended Mexican family whose members are NOT the source of inspiration for her characters. Or so she tells them.

Giveaway ends 11:59pm EST May 20th. Please supply your email in the post. You may use spaces or full text for security. (ex. jsmith at gmail dot com) If you do not wish to supply your email, or have trouble posting, please email maureen@JustContemporaryRomance.com with a subject title of JCR GIVEAWAY to be entered in the current giveaway.

Don't forget to check out the JCR SHOWCASE for giveaways!