Congratulations to "Colleen C" and "Bn100", the winners in Jennifer's giveaway. Thank you to all who participated! 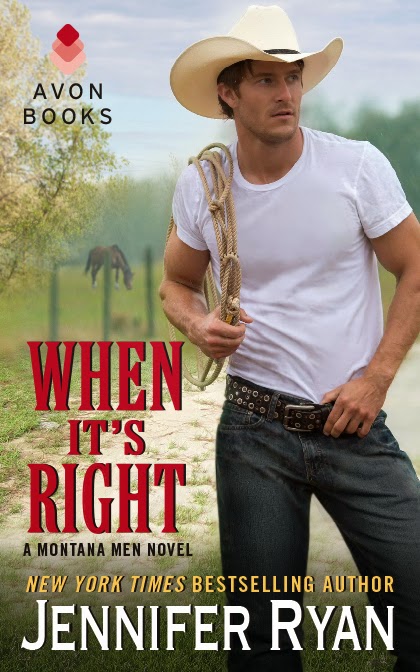 I am so happy to be here today to talk about my upcoming release, WHEN IT’S RIGHT.

With three series out (The Hunted, McBrides, and Montana Men) I’ve become known for writing strong female leads. Gillian is no exception. She’s got so much to overcome, surviving years of her parents’ drug use, neglect, and abuse. Sometimes all you need is one thing to help you survive, one reason that makes it all worth it. For Gillian, her younger brother Justin is the reason she endures the traumatic ordeal and picks herself up to start a new life.

I wish Justin and I were anywhere else.

Inside, the pressure built. How good it would feel to open her mouth and unleash a string of curses, insults, and blame for what her father put her and Justin through day in and day out. She hated him for spending his life drowning in a bottle and doing drugs, his life going up in smoke. Her life went up with it. Justin’s too. She wanted it to end. One way or another, just end.

Her father swatted at some imaginary bird, or butterfly, or dragon for all she knew. Only he saw the tormenting hallucinations. If he was this far gone, he was even more volatile and dangerous than usual.

“We have to go.” His words came out rushed. He swatted at the air again, this time spinning around to the right before he stopped and turned the other way again, tracking his imaginary flying devils, waving his arms over his head to swat them away.

She shook her head, frustrated and tired of dealing with him. This. Everything. She wanted to run away, but where would she go? It was all she could do now to keep a roof over Justin’s head and food in his belly with the diminishing help her father supplied. Out on the streets, or in a shelter, they’d be vulnerable to even more horrors. What kind of life would that be for Justin? Better than this one? Maybe. Maybe not. Still, she needed to find a way to give Justin better than she’d had growing up with a volatile drunk who could barely keep a bartending job and supplemented his income selling drugs to support his own habits.

Fed up, she stepped toward him to grab his arm and lead him back to their place. He jumped out of her reach and laughed. The sound held no humor but a touch of hysteria in the odd shriek. Her father pointed at her, shaking his head side to side. “No. No. No. No. No.” Again, his ominous giggle sent a chill up her spine.

Her father grabbed Justin’s arm and yanked him off the couch. She stood her ground in front of him. No way her father left here with Justin.

“Let him go. He needs to finish his homework.” She made up the excuse, hoping her father released Justin and she got the boy out of there.

“He’s mine. He’ll keep them away. He’s got the light that turns them away.”

She sighed, knowing just where this was going and not liking it one bit. Soon her father would spiral into a psychotic delusion no one could talk him out of.

Not that lucky, she tensed and waited to see what would come next. Her father pulled Justin in front of him, held him by both arms, and turned him this way and that, a shield against an enemy only he could see.

“Ow!” Justin cried out when her father’s fingers dug into his thin arms.

“Keep them back.” Her father tugged on Justin again. Hurt and scared, Justin planted his feet and pulled away, trying to get free. Her father held tighter and spun Justin around to face him. When Justin fell to the floor, tears spilling from his eyes, Gillian couldn't take the ache in her heart. Her anger exploded.

“Keep them back.” Her father shook Justin again.

Gillian lost it. “I warned you, if you ever touched him...” She lunged for her father, striking him in the arm, breaking his hold on Justin. She shoved her father two steps back, and Justin ran for Mrs. Wicks in the kitchen. She rattled off the building address to the police on the phone. It wasn’t the first time someone called the cops on Gillian’s father, and it probably wouldn’t be the last. No way they got here in time to stop him now. Whatever happened next, Gillian would sure as hell make sure her father never got anywhere near Justin again.

Her father came after her in a drug-hazed rage that gave him strength and sent him into a mindless attack. All other thoughts disappeared behind the fury filling his mind. Her father only knew how to hurt. She’d been through this too many times to count and braced for the impact when his fist came at her, straight into her eye. Pain exploded in her head. She shoved him in the chest, but he came back with a slap to her jaw that stung something fierce. She kicked him in the shin and shoved him again. He fell back two steps, his hand coming up from behind his back. Momentarily stunned, she didn’t move as she stared down the gun's black barrel in disbelief that he’d actually pulled a weapon on her. She didn’t know where he’d gotten it, only that this added a whole other level to what had seemed like just another rotten night in her life.

Her father held the gun steady, even when he swatted the imaginary devils pestering him. His eyes narrowed on her, and in that moment she joined him in the madness she saw swirling in his gaze.

One of them wasn't leaving that room alive.

She rushed him, grabbed the gun, and spun her back into his chest, the gun in both their hands pointed to the window. He tried to wrench it free, punching her in the ribs with his free hand. She jerked on the gun again and again and scratched his hand to get him to release it, until he finally let go and the gun thumped onto the floor and skittered across the scarred hardwood. He shoved her from behind. She stumbled forward, scooped the gun off the floor, and turned to face him.

Never turn your back on a psycho.

He leaned forward and charged her like a wounded beast, with murder in his eyes and a guttural yell that made the hairs on the back of her neck stand on end.

She swung the gun up and fired. Once. Twice.

Blood bloomed on his chest. Still he kept coming. His hands fisted in her T-shirt. He lifted her off her feet and shoved her backward into the window. Her back and head hit the glass with a crack a split second before it shattered. Glass tore and bit into her skin, but she didn’t feel the pain past the one thought in her head. It’s done.

She flew through the window.

Her father’s dark form stood in the opening, highlighted by the lights behind him. He literally dropped to the floor out of her sight.

Be safe, Justin. Be happy.

Her body slammed into the roof of a car with a sickening thud. Everything went black.

GIVEAWAY
What is the one thing in your life that sees you through the tough times?
I’ll give away 3 signed paperbacks of WHEN IT’S RIGHT (US only). Leave a comment to enter to win.

Everything's bigger in Big Sky country, including the hearts of the Montana Men

Wide open sky, rolling green hills . . . Gillian Tucker could get used to life in the country—one far from the violence she left behind in San Francisco. Warily accepting an invitation to the Montana ranch that belongs to her grandfather, a man she's never met, Gillian hopes this is the haven she seeks. A sexy, overbearing cowboy who shines a light on her well-hidden dreams is not at all part of her plans.

Blake Bowden's reckless past is far behind him, and as a newly named co-owner of Three Peaks Ranch, he's not taking any chances. Until a beautiful, haunted woman arrives, igniting a desire he shouldn't feel. His partner's granddaughter is strictly off limits. But the longer Gillian's there, the stronger the pull grows between them. And when a new danger surfaces, Blake will do anything to keep her safe…even if it means risking everything for her heart.

ABOUT
Jennifer Ryan, New York Times and USA Today bestselling author of The Hunted and McBrides Series, writes romantic suspense and contemporary small-town romances.
Jennifer lives in the San Francisco Bay Area with her husband and three children. When she isn’t writing a book, she’s reading one. Her obsession with both is often revealed in the state of her home, and how late dinner is to the table. When she finally leaves those fictional worlds, you’ll find her in the garden, playing in the dirt and daydreaming about people who live only in her head, until she puts them on paper.

Please visit her website at www.jennifer-ryan.com for information about upcoming releases.

Giveaway ends 11:59pm EST March 24th. Please supply your email in the post. You may use spaces or full text for security. (ex. jsmith at gmail dot com) If you do not wish to supply your email, or have trouble posting, please email maureen@JustContemporaryRomance.com with a subject title of JCR GIVEAWAY to be entered in the current giveaway.