Congratulations to "Julia C" and "Colleen C.", the winners in Barbara's giveaway. Thank you to everyone who participated!


As a big believer in setting goals and making New Year’s resolutions, I’m always ready at the first of the year with a long list of things I want to accomplish, both long- and short-term.  And as an overachiever, I’m usually upset with myself somewhere around the middle of February, when I discover I haven’t checked off many—or any—of my short-terms goals.

Not long ago, I read about an interesting concept:  re-starting New Year’s goals later in the year.  The author of the article mentioned selecting the midway point in June or July. Overachiever that I am, I figured…with a new month just around the corner…why not re-start on April 1—and that’s no foolin’!  :)

I’ll bet many of us are all gung-ho on January 1 and set way too many goals.  Instead, if we paced ourselves and set just a few objectives around the first of the year, we could start off a new quarter with a fresh list.  Plus, if we haven’t checked off any of those short-term goals, we could get a second chance to accomplish them before too much of the year is behind us.

In the long run, pacing ourselves could mean we might actually 1.  achieve all our goals by the end of year and 2. not have to periodically beat ourselves up over the goals we didn’t meet.  And I have to tell you, I’m always as ready to beat myself up over those missed goals as I am eager to make them in the first place!

Getting a second chance sounds like a great idea, doesn’t it?  And it can relate to much more than New Year’s resolutions.

“Do-overs” works for many things in our lives and in the lives of storybook characters, too.

Tomorrow is release day for the first book in a new series called The Hitching Post Hotel.  In this series, a matchmaking grandpa has a goal of his own:  he wants to get all three of his granddaughters married off and settled down, preferably somewhere close to his Cowboy Creek, New Mexico, ranch.

In book one, The Cowboy’s Little Surprise, Cole and Tina are former high school sweethearts…sort of….  :)

This is a secret-baby book—one of my favorite types to read and write—which means the heroine has had the hero’s child and the hero is completely unaware he’s a daddy.  A secret-baby book is as satisfying to me as the thought of re-starting my New Year’s resolutions, because the whole idea behind each of them is getting a second chance to do things right.

Now, it’s your turn—and this doesn’t have to be about New Year’s goals.  In what area of your life would you like to have a second chance?

I’m happy to chat, plus I’m giving away a couple of books through entries into the Rafflecopter below.  Good luck!

Barbara White Daille lives with her husband in the sunny Southwest.  Though they love the warm winters and the lizards in their front yard, they haven’t gotten used to the scorpions in the bathroom.

Barbara’s thrilled to share news about the debut of a brand-new series, The Hitching Post Hotel, which features a matchmaking grandpa determined to see his three granddaughters wed.  The series begins in April 2015 with The Cowboy’s Little Surprise, followed by A Rancher of Her Own in July and a third as-yet-untitled book in December.

Find The Cowboy’s Little Surprise at your favorite booksellers, including: 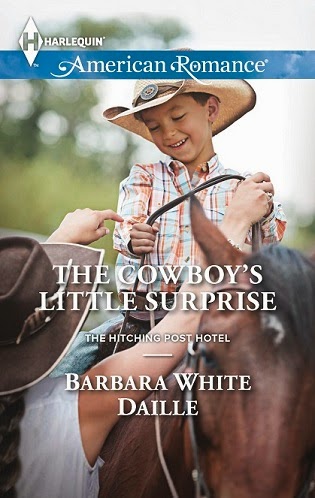 A guy like Cole Slater is hard to forget. Tina Sanchez should know—for years since high school she's tried to bury the pain of Cole's cruel betrayal. But it's impossible to ignore the man she sees reflected in her young son's eyes now that Cole is back in her life—and about to meet the child he never knew he had.

Returning home to New Mexico, Cole is determined to put his playboy reputation to rest. Especially now that he knows there's a little boy looking up to him. And seeing Tina again reignites all the feelings Cole ran from as a teen. Despite his fear that he can't be the man Tina deserves, he's determined to try. For his son's sake—and his own.

“Ally,” Tina said, “as sorry as I am about your cute wrangler, you can’t throw yourself at every good-looking cowhand who walks in. Please tell me you didn’t do that with this one.”

“I can’t help my impetuous nature.” Ally grinned. “You could learn something from me, chica. How to have your heart broken on a weekly basis. It would sure make your life more exciting.”

“Once was enough for that, thanks,” she said grimly.

Ally frowned. “You’re not looking too happy yourself. What’s wrong?”

She hesitated. But Ally was the only friend who could understand what Cole’s return meant to her. “Your blond isn’t the only man who’s shown up in town. Cole’s back.”

Her best friend was also the only woman Tina knew who could manage to screech in a whisper.

Ally shook her head, sending her dark curls tumbling around her shoulders. “No. You look like you’re in shock. C’mon, let’s get going.”

Tina moved through the parking lot and out onto the sidewalk on autopilot, in the same manner she had gotten herself to the store. Somehow, she had made it all the way here without thinking again of Cole. Blurting out the news of his return to Ally had brought him back to her again.

A ridiculous choice of words, since he’d never been hers to begin with.