Forever In My Heart


Welcome to Decadent DeLites, the hot new place to get “homemade treats that remind you of your grandma’s kitchen”. That’s the sign that welcomes the hero in the opening scene from Forever in My Heart. In this new Contemporary Romance, you’ll meet a sassy Italian-American café owner and a smokin’ hot tortured Italian-Irish American retired army sergeant. When Jamie DiSilva returns from the army to start a home improvement business, he’s unprepared for the cold shoulder he receives from the town. Add to it the sparks that fly from his ex-girlfriend and her meddling family, and he’s not making friends anytime soon.

They say the way to a man’s heart is through his stomach but the way to Vicky DiFrancesco’s is through her café. Now all Jamie has to do is convince Vicky to allow him to renovate her less-than-modern place of business while he searches for something that may have been left behind by his late brother. Something that three deadbeat thugs are willing to injure, kidnap and possibly kill to get their hands on.

You’ll find a little comedy, a little suspense, Italian traditions, and decadent sweets in this romance where love, family, and friendship unite. 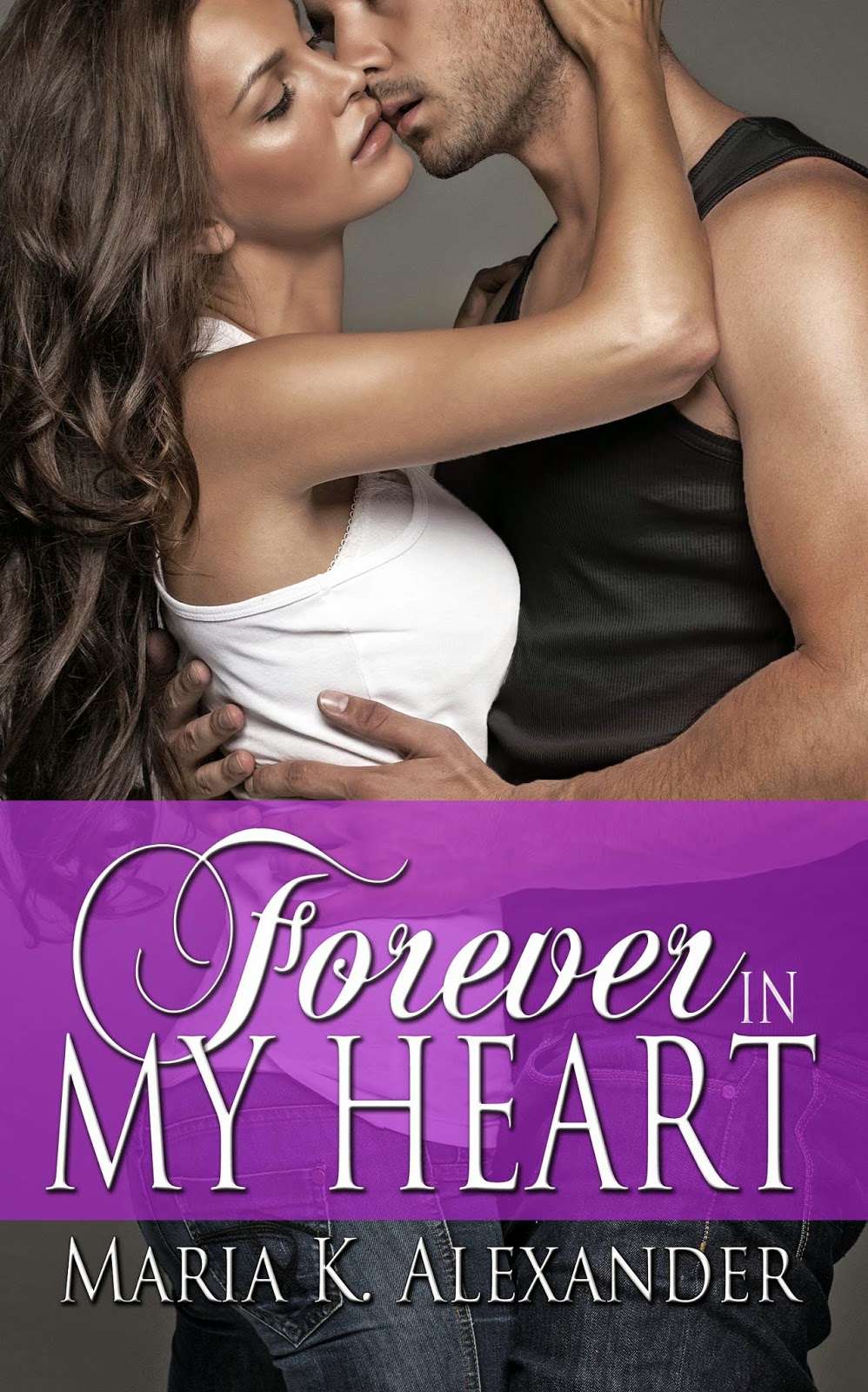 Forever in My Heart by Maria K. Alexander

Vicky DiFrancesco is ready to put the past behind her. After a humiliating divorce, she’s determined to make her new café a success. The last thing she needs is her first love around, reminding her of what they’d lost. But when her life is threatened, could he be the very man she needs?

Jamie DiSilva’s homecoming after retiring from the army isn’t the one he’d been hoping for. Now, he’s trying to start a home improvement business in a town settled on holding him accountable for the sins of his late brothers. Redeeming himself to the girl he never stopped loving and her family is difficult when his brothers’ secrets come back to haunt him.

Untangling themselves from the past means righting several wrongs and deciding if their love is meant to last forever.

Excerpt from Forever in My Heart

“What happened today between us can never happen again.”

“Because of your sister?”

“Because of my entire family. Kate isn’t the only member with a grudge against the DiSilva family.”

“My parents and I have never done anything to warrant being shunned by them. Our parents were best friends.”

“That doesn’t change what your brothers did or how it’s impacted my family. It’s one thing to deal with you living in the same town. It’s another for them to accept what just happened between us.”

“What happens between us has nothing to do with your family,” he snapped. He was tired of being judged. It wasn’t like she didn’t feel something for him. He lowered his voice and cupped her cheek. “Things can be good between us, Vick. You know it.”

She held his gaze, and he felt her tremble. He leaned forward, determined to convince her to give them a chance.

Her hand shot out and stopped him from doing more than graze her lips. “Stop. Nothing good will come of this.” She rolled off the bed and kept her back to him.

“You’re choosing them over your own happiness?”

She wiped at her face before turning to him.

Despite the tears that dampened her eyes, her answer was clear from the stubborn set of her chin. “What choice do I have?”

“And a price to pay. They’re my family. I pick them. I’ll always pick them.”

Maria K. Alexander is an award-winning author of contemporary romance. When not writing, Maria loves to read, bake, downhill ski, visit the beach, and watch romantic comedies. Maria lives in New Jersey with her husband and children, and writes in her “spare” time between juggling a full-time job and her kids’ busy schedules. You can keep in touch with Maria at http://mariakalexander.com.

From February 20th through March 8th Maria is having a release giveaway. Stop by for a chance to win a digital copy of Untangle My Heart, the first book in her award-winning Tangled Hearts series or a $5 Amazon GC.