Congratulations to P. Clayton, the winner in Jennifer's giveaway. Thank you to all who participated!

One thing that I like to do is cook. And if time allows I like to try different recipes. As such, I like to include food in my books whenever possible. In my latest release, THE PLAYBOY OF ROME (The DeFiore Brothers, book 1) my characters are both chefs, who end up working on a reality television show. So they are always cooking up something yummy.
The research for this book was totally delicious. I reviewed authentic Italian recipes from ravioli to mushroom risotto and a bunch of mouthwatering recipes in between. Who knew writing a book about two chefs could be such an adventure. ;-)

Here’s a variation of a recipe that shows up in THE PLAYBOY OF ROME:

1. Put large pot of water on to boil.
2. Grate cheese.
3. Peel 2 cloves of garlic, leaving them whole.
4. When water is boiling, add salt and pasta, cook al dente as instructed on packaging.
5. Cook the cubed pancetta in a pan.
6. Add garlic. Heat for a minute to soften. Set aside.
7. In mixing bowl, whisk eggs. Add the cheese, pancetta and black pepper to taste.
8. Drain pasta and return to pot.
9. Pour egg mixture a little bit at a time over hot pasta. The mixture should create a creamy sauce. If it’s too liquid, turn the heat back on for a minute or two. Keep tossing the pasta so it doesn’t clump.
10. Serve and enjoy!

In my current release, the hero and heroine don’t exactly get off to the best start. Dante’s grandfather has had a stroke and is no longer running the restaurant in Rome, Italy when Lizzie arrives for her internship and the reality show segment. Now she’s working on Dante to keep his grandfather’s promise and take her under his wing. She wants him to teach her what he knows about heating things up in the kitchen. ;-)

FYI, Pasta all Gricia is the same recipe as above without the eggs.

How dare she question his prowess in the kitchen?

Dante stared down at a plate of pasta alla gricia, one of his favorite dishes. The fine balance of cured pork and pecorino romano gave the pasta a unique, tangy flavor. It was a dish he never grew tired of eating.

He proceeded to divvy the food between two plates. After all, he didn’t need that much to eat at this late hour. As he arranged the plates, he wondered why he was going to such bother. What was so special about this golden-haired beauty? And why did he feel a compulsion to prove himself where she was concerned?

It wasn’t as if he was ever going to see Lizzie again. Without his grandfather around to hold up his end of the agreement, she’d be catching the next plane back to New York. Still, before she left, he needed to prove his point. He’d taken some of his grandfather’s recipes and put his own twist on them. And the patrons loved them. This meal was sure not to disappoint the most discerning palate.

He strode back into the dining room and placed a plate in front of Lizzie. She gazed up at him with a wide-eyed blue gaze. Her mouth gaped as though she were about to say something, but no words came out.

He stared at her lush lips, painted with a shimmery pink frost. They looked perfectly ripe for a kiss. The urge grew stronger with each passing second. The breath hitched in his throat.

“This looks delicious.” She was staring at him, not the food. And she was smiling.

Sometimes it’s the simple gestures, such as sharing your dinner, can overcome the largest of obstacles. Dante and Lizzie take a bit to catch on, but eventually they figure it out. ;-)


THE PLAYBOY OF ROME 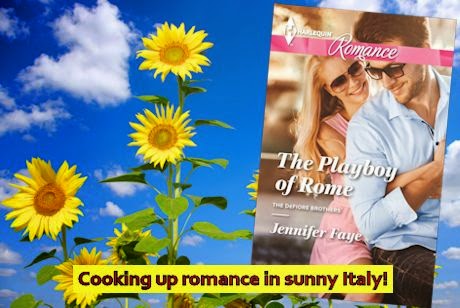 Lizzie Addler's dream of working in Italy is about to come true—that is if she can convince passionate Italian chef Dante DeFiore to keep his side of their bargain. Dante might be hotter than the Italian sun, but he's as cool as ice toward Lizzie…

Dante hasn't the time to pander to Lizzie's dreams of culinary fame—he has a restaurant to run! But as Lizzie proves herself to be a spectacular addition to his kitchen—and to his life—Dante wonders…can he keep her forever?

And this is just the beginning, the second book in the DeFiore Brothers series is out next month.

Giveaway:
How about you? What’s one of your favorite recipes?
One commenter will win an autographed copy of my newest release, THE PLAYBOY OF ROME + swag.


Giveaway ends 11:59pm EST March 6th. Please supply your email in the post. You may use spaces or full text for security. (ex. jsmith at gmail dot com) If you do not wish to supply your email, or have trouble posting, please email maureen@JustContemporaryRomance.com with a subject title of JCR GIVEAWAY to be entered in the current giveaway.
Posted by Maureen A. Miller at 12:30 AM