Congratulations to "32Flavors", the winner in Jenny's giveaway. Thank you to all who participated!

When my last book came out, a lot of people told me it wasn’t a typical billionaire book. Now, I think some of those people meant it as a compliment, but some of them did not! (For the record, I don’t mind. I love all reviews! Keep ‘em  coming! I’m just glad anyone is reading!) Since my new book is a continuation in that series, I decided to take a light-hearted look at the trope of the billionaire hero as it relates to Dax Harris, the software CEO hero of Sleeping With Her Enemy.

Actually, Dax is only a millionaire. I don’t specify how many millions we’re talking about, but come on. There are only so many billionaires in the world, and I’m pretty sure they’re all used up. Also, this is Canada. We like taxes.

2. Islands.
I have one! Oh, but wait. It’s supposed to be private island, right? Preferably of the Caribbean variety. Oops. Dax does live on an island, but it’s only in the Toronto Harbor. And he has lots of neighbors. Some of them are crazy.

3. He commutes by boat.
Well, kind of. Dax takes a municipal ferry to and from the mainland, where he works. Or he canoes. But he looks very commanding while doing so.

4. He’s been damaged by his family.
Nope. Not even a little. He loves his family. They’re a bunch of nutbars, and they annoy the heck out of him much of the time, but he adores them. In his manly, understated way. But don’t worry: he is a little damaged. Just not by his relatives.

5. He’s dominant in bed.
Well, he can be. But not always. Let’s just say he appreciates variety.

6. He’s a high-powered financier.
He’s high-powered now. But he helms a software company, one that began as a longshot start-up. Basically, he’s a geek.

I was going to stop there, but I realized that Dax does have a few traits that totally fit the bill of the romance billionaire.

2. He’s really, really good-looking, if a little bit scowly.
Yes! Dark good looks! Doesn’t smile very much! (Unless he’s around his adored family, but we’ll keep that between ourselves.)

3. He just hasn’t met the right woman.
True. Totally, totally true. And it was so much fun introducing him to her.

GIVEAWAY
I’ll be giving away a copy of Sleeping With Her Enemy to one commenter or email entrant.

EXCERPT
He was looking at her kind of strangely, head cocked slightly. Probably he was about to say something insulting, so she lobbed her own question out before he could talk.

“What about your family?”

“They’re great.” Then he narrowed his eyes at her.

She must look as bewildered as she felt. It was just hard to imagine the arrogant, womanizing Dax coming from a nice, normal family. He seemed like the kind of person who had been raised by wolves. In a mansion.

“What?” he protested again. “They are. They’re kind of insane, mind you, but I love them.”

Huh. The easy, casual way he said he loved his family surprised her. “They must be really proud of you.”

He nodded. “Ridiculously so. It’s actually a little embarrassing—you should see my mother’s Christmas letter.” He stole a fry from her. “I just wish they would let
me help them.”

“They still live in the tiny house I grew up in, in a not-great area of Scarborough.”

That surprised her. He was such a force, so confident and capable—and rich—that she just assumed he’d come from money.

“It’s fine,” he continued. “It’s just that they could be so much more comfortable. And they’re getting old. It would great to have them somewhere they don’t have to shovel or
take care of the lawn. But they won’t move.”

“They sound great.” She meant it, even if she was simultaneously a little jealous. What would it be like to be surrounded with people who loved and supported you, people you didn’t have to constantly be managing? People who thought you were enough? 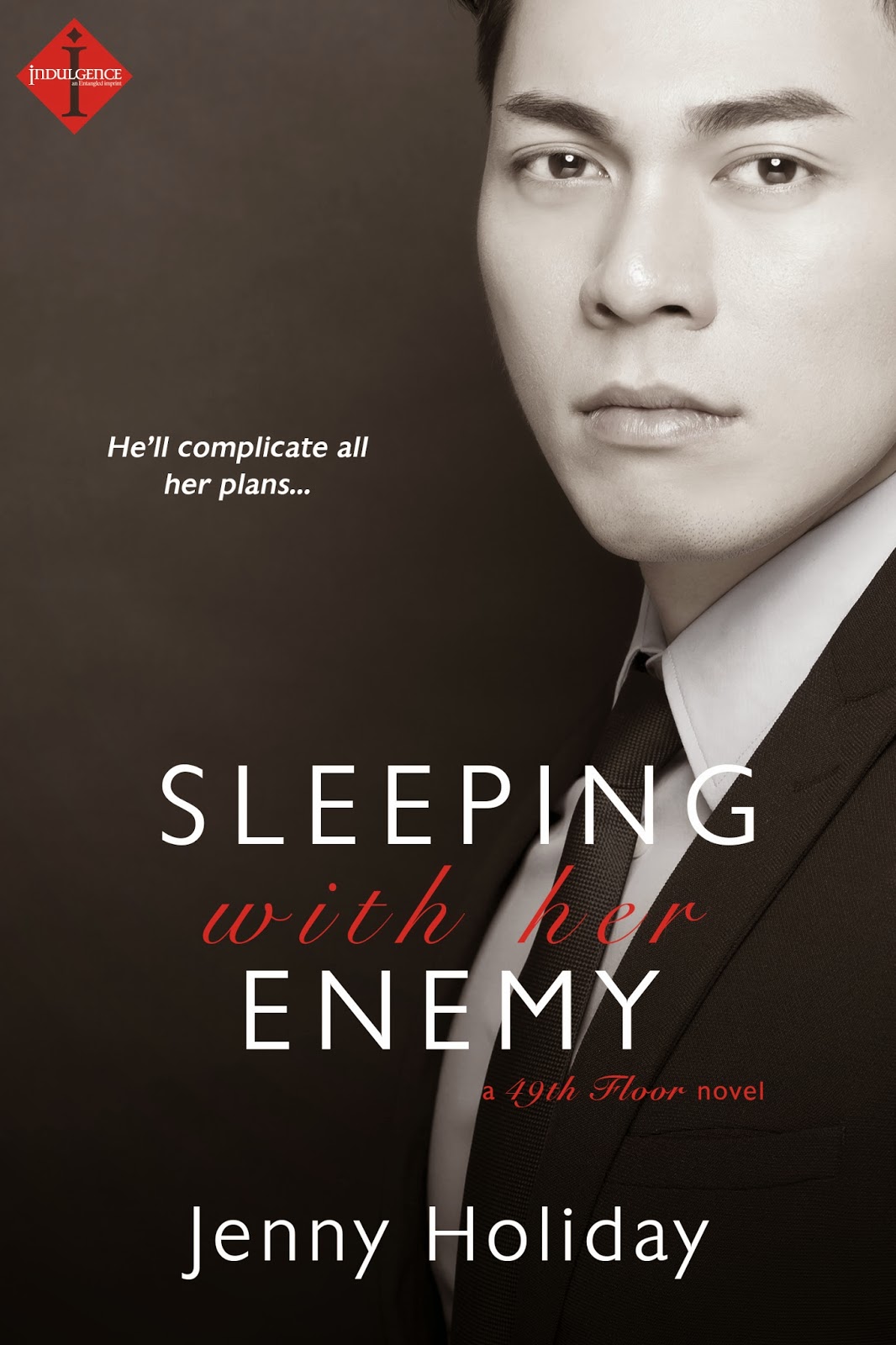 SLEEPING WITH HER ENEMY

He'll complicate all her plans...

Amy Morrison is supposed to be at her wedding. But when her husband-to-be jilts her at the altar, a distraught Amy runs to the only place she feels safe—her office. Besides, everyone who works on her floor is at her wedding...except him. Dax Harris. Playboy, executive, and Amy's official office enemy.


While he and Amy don't see eye-to-eye on the best of days, Dax can't help but feel badly when he sees Amy mid-meltdown. Next thing he knows, he's gotten her good and drunk, and they're making out like two  teenagers. And since neither of them want anything serious, why shouldn't they be frenemies-with-benefits? Because there is no possible way they could ever fall for each other...

ABOUT ME
Jenny Holiday started writing in fourth grade, when her awesome hippie teacher, between sessions of Pete Seeger singing and anti-nuclear power plant letter writing, gave the kids notebooks and told them to write stories. Most of Jenny’s featured poltergeist, alien invasions, or serial killers who managed to murder everyone except her and her mom. She showed early promise as a romance writer, though, because nearly every story had a happy ending: fictional Jenny woke up to find that the story had been a dream, and that her best friend, father, and sister had not, in fact, been axe-murdered.

Giveaway ends 11:59pm EST Feb. 27th. Please supply your email in the post. You may use spaces or full text for security. (ex. jsmith at gmail dot com) If you do not wish to supply your email, or have trouble posting, please email maureen@JustContemporaryRomance.com with a subject title of JCR GIVEAWAY to be entered in the current giveaway.