Congratulations to "Bn100", the winner in Robyn's giveaway. Thank you to all who participated!
Hi Everyone! 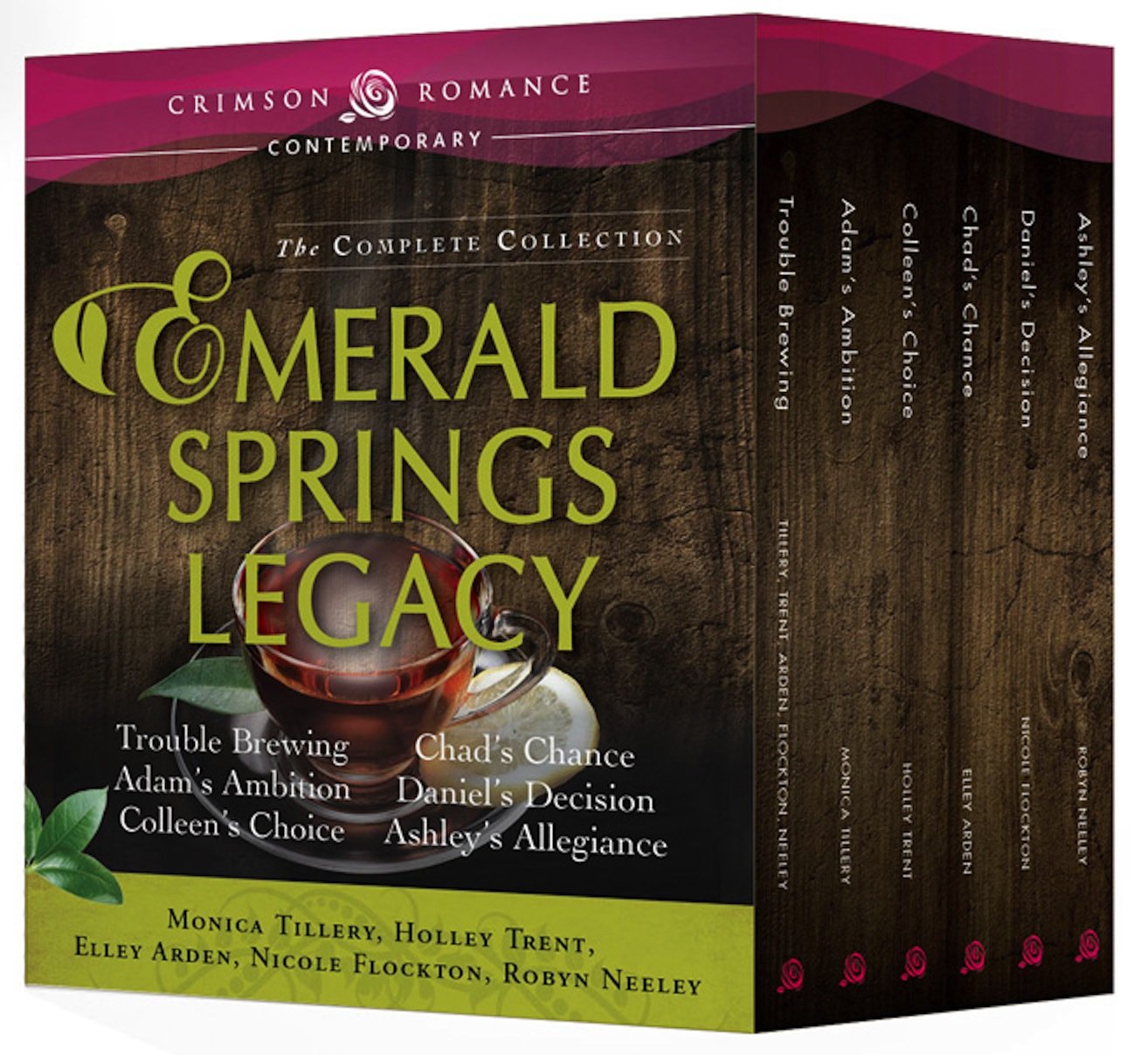 It's release day for the Emerald Springs Legacy Collection box set--a Crimson Romance continuity, in which each book was written by a different author. We had a blast writing this series from building the majestic world of Emerald Springs to deciding the deliberate sabotage acts to take place in each book. Even naming teas was a source of much amusement!

One thing we could never agree on was who is the hottest hero in Emerald Springs, and as you can see, we're still debating it!

Adam Whitman (Adam's Ambition by Monica Tillery)
Monica: I don’t know why we’re even debating this again, because Adam is clearly the most desirable Emerald Springs Legacy hero! As the eldest Whitman brother, he’s had the weight of the family empire on his strong, broad shoulders his whole life. Though he’s ambitious enough to have made a name for himself in the exciting world of environmental engineering, he’s selfless enough to come home when his father asks. His high school sweetheart, Zoe Miller, was never able to forget his smoldering good looks, his brilliant mind, or the way he commands attention whenever he enters a room. Not only devastatingly handsome and charming, Adam is a family man who’s loyal to his core. He’d do anything for his father, his brothers, and their business. He’d make any girl weak in the knees, but he’s also the steady presence you can count on.

Alan Prevost (Colleen’s Choice by Holley Trent)
Holley: Who doesn’t love a man with a curious accent (and deep pockets)? Alan Prevost may be a smidge on the devious side, but his calculating ways only add to his worldly charm. He may have a fat trust fund, but he’s also got a fully loaded tool belt, dirt under his nails, and a brain full of random trivia. He may be the son of a major rooibos grower, but he’s just as knowledgeable about plumbing and electronics as he is about tea. Alan has to be the hottest man in Emerald Springs. After all, he manages to thaw the coldest woman in town with his quick wit and deft handling of his tools.

Chad Whitman (Chad’s Chance by Elley Arden)
Elley: After a long day, who doesn’t want a hot guy and a cold beer? Chad Whitman can deliver both. He’s the brains behind the Whitman’s new pub, but what he really wants is to live a joyful life beside the woman he loves. He’s kind, adventurous, and doesn’t mind letting a beautiful woman call the shots in and out of the bedroom. With Chad, there’s never a dull moment. And there’s nothing hotter than someone who lives and loves with passion.

Daniel Whitman (Daniel's Decision by Nicole Flockton)
Nicole: Why is Daniel Whitman the hottest Whitman brother? It’s simple really. Not only is he handsome, sensitive and sexy he has his own Resort and Spa! I mean who doesn’t love a guy who can arrange for the love of his life to get endless spa treatments. Treat her to couples massages. What could be more romantic than that? Seriously though, Daniel is a guy who loves hard. Once he finds his perfect woman he will travel to the ends of the earth for her. He will forget his family obligations for the woman he loves. Who can’t love a guy who puts a woman first?

Jacob Sanders (Ashley's Allegiance by Robyn Neeley)
Robyn: The Whitman men might contend to be the hottest among the brothers, but we all know that Deputy Sheriff Jacob Sanders can make any woman's tea bubble! He loves his town and would do anything to protect its residents--especially one feisty, blonde Whitman that he's proven time again, he'd do anything for. So what if he arrested her in Chapter One. That was just foreplay!

Giveaway:
So what do you think? Leave a comment on who you would award "Hottest Hero in Emerald Springs" based on these descriptions alone, and you could win a $5 Amazon Gift Card.


Giveaway ends 11:59pm EST Feb. 5th. Please supply your email in the post. You may use spaces or full text for security. (ex. jsmith at gmail dot com) If you do not wish to supply your email, or have trouble posting, please email maureen@JustContemporaryRomance.com with a subject title of JCR GIVEAWAY to be entered in the current giveaway.
Posted by Maureen A. Miller at 12:30 AM