I don’t necessarily go into writing a book thinking “This one is going to push all sorts of boundaries!” Sometimes it just happens that way. That’s how BETTING ON FATE came about. It’s a sequel to MISTAKEN BY FATE, which was the hottest thing I’d written to date, and I’d set up the hero’s twin as more when it comes to kink and sexy good times. 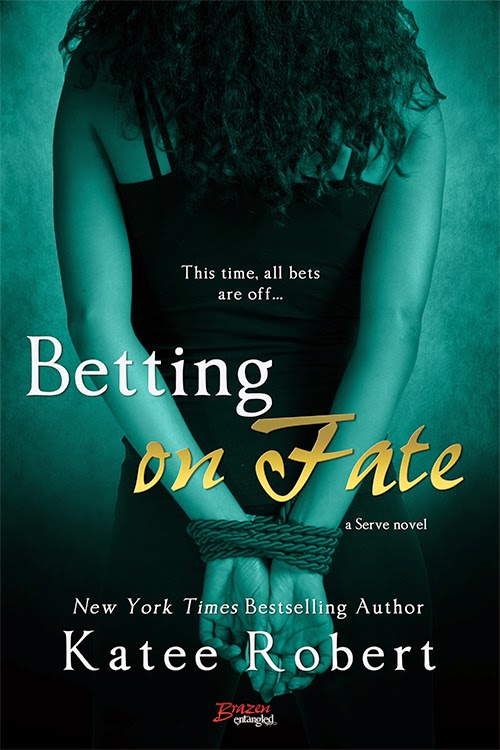 There are a lot of rules that come with writing category, the main of which is that the hero and heroine are only with each other through the entirety of the book. So how does one go about slipping a third person in, even for a single scene?

I think there are multiple ways that one could go about it, but the route I chose was basically to treat the third person like a sex toy that’s been brought in specifically for that scene. And that’s how I had the heroine look at it—this third person (she’s blindfolded at the time) is an extension of the hero’s Will, rather than an entity in his own right. He comes in, he has some fun, and then he slips away. The focus is still on the hero and the heroine and what they’re getting out of the scene.

Good lord, it was hot!

BETTING ON FATE was one of the more difficult books I’ve written because of the way it pushed boundaries, personally and otherwise, and it was so much fun to bring Will and Penelope’s story to life. I hope you’ll enjoy reading it as much as I enjoyed writing it!

This time, all bets are off…

Penelope Carson loves to steal clients from Will Reaver. Yet something in her business nemesis’s icy blue eyes makes Penelope…nervous. It certainly doesn’t help that the man is the living embodiment of a Norse god. A controlled, powerful Norse god. Which she really should have remembered before she made a bet with him—because losing means becoming Will’s personal submissive for a week.

There’s nothing Will would like more than to have Penelope kneeling before him in complicit submission, her fiery dark eyes inviting him in. Challenging him. But their bet takes Will and Penelope deeper than either of them have ever been. Where control is an illusion, and boundaries are pushed aside. And where hearts become the stakes in a game that neither Dominant nor submissive can win…

Author Bio:
New York Times and USA TODAY bestselling author Katee Robert learned to tell her stories at her grandpa’s knee. She found romance novels at age twelve and it changed her life. When not writing sexy contemporary and speculative fiction romance novels, she spends her time playing imaginary games with her wee ones, driving her husband batty with what-if questions, and planning for the inevitable zombie apocalypse.