Congratulations to "Sue G.", the winner in Jessica's giveaway. Thank you to all who participated! 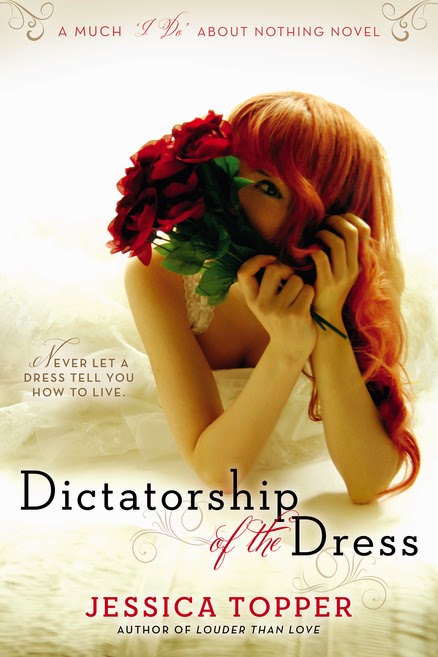 Dictatorship of the Dress is a story of second chances, missed flights, and a woman ruled by her mother’s wedding dress. It’s the first in my “Much ‘I Do’ About Nothing” series – wedding adventures with a twist!

Here’s one of my favorite scenes, where Noah accuses Laney of Bridezilla behavior.

EXCERPT:
“Well, you’ve got a dress dictating your every move. You won’t let it out of your sight.” …

I frowned as I accidently lost control of my chopsticks, my California roll dropping into the little plastic cup of soy sauce. “Sounds like classic Bridezilla behavior to me.”

She almost choked on her wasabi-laced sushi piece. “Bridezilla? I am the least likely person to turn Bridezilla you will ever meet. In fact, I am like the Mothra of the Bridezilla world.”

“You have the chopstick skill level of a preschooler, and you dare to go around citing Japanese monster movie characters to me?” Laney seethed. “I have my reasons for choosing Mothra.”

“Yeah?” I stabbed my chopsticks straight through the middle of my errant sushi piece. “Let’s hear them.”

“What, to talk to a bride about her wedding dress before the big day?”

“No, to stab your chopstick through the middle of your food.” She reached across the table and readjusted my sticks for me with one hand. I noticed she kept her other hand on the garment bag riding shotgun in the chair next to her. Its midnight blue sheen and fancy silver embroidery looked out of place in the middle of the airport food court.

“So, what’s with guys wanting to have bachelor parties in Vegas? Are they really buying into the whole ‘what happens here, stays here’ thing?” she demanded.

“Dunno,” I mumbled. “I’m just showing up where I’m told to.” Which was the truth.

“Vegas just seems so plastic,” Laney went on. “Everything’s a mirage. I mean, you’re in the freakin’ desert. Everyone having the time of their lives, please.” She dismissed the notion with a swat of her hand. “It seems so forced. If the groom really needs one last hurrah, take him to Amsterdam where there are real hookers and good dope, at least.”

Is that where your groom is right now? I felt like asking. I wondered if she really felt that way. Either she was the coolest Bridezilla on the planet or she was trying to pick a fight. “Maybe the groom just wants to chill with his friends and have some time to not have to think about his wedding. A break from the china patterns and seating arrangements?” I could list five or twenty other things, but just the thought was enough to make me break out in a sweat.

“You mean a break from things that make him feel less like a man? So he can go beat his chest and act all macho? And leave the girl stuck with all the crap jobs? Where is it written that all the brides have to buy into the Martha Stewart song and dance?”

Says the diva with the death grip on the fancy dress bag.

Not everything is what it seems – including Noah and Laney’s first impressions of each other. She’s actually just the dress-bearer for her mother’s wedding, in charge of getting it from New York to Hawaii for the big day. Noah is on the way to a bachelor party…but it’s his own, actually. And his cold feet have nothing to do with the weather that has temporarily stranded both of them in Chicago…

Confession time: I have my own Bridezilla story.

The year was 1999, before the birth of bridal reality TV and being able to plan your entire dream wedding on Pinterest without even being engaged. It was a simpler time, a time when a bride had to rely mostly upon magazines for her resources and inspiration.

I, for one, refused to get sucked into the wedding machine. My simple, white dress was bought off the rack at Bloomingdale’s…and it actually cost less than my wedding shoes. (Come on, it was the late 1990s. I totally needed those Kenneth Cole, chunky heel Mary Janes!) We’d managed to keep the guest list at thirty people, and our location was a reasonable, equal traveling distance for his both family and mine. We were putting up our guests in a charming B&B and treating them like total royalty.

Doesn’t sound too Bridezilla-like, does it?
Let’s examine a less-extreme definition of the word:

Bridezilla:
A woman who, in the course of planning her wedding, attempts to exercise an high degree of control over all or many minor details of the ceremony and reception.
Etymology:
A portmanteau word from bride and Godzilla, the destructive dinosaur-like monster from the Japanese film series.
First used:
mid-1990s.

I wasn’t a raging, nasty “it’s all about me” vulgar Bridezilla. I didn’t scream at anyone or make anyone cry. I was sweet, actually. Maybe too sweet. 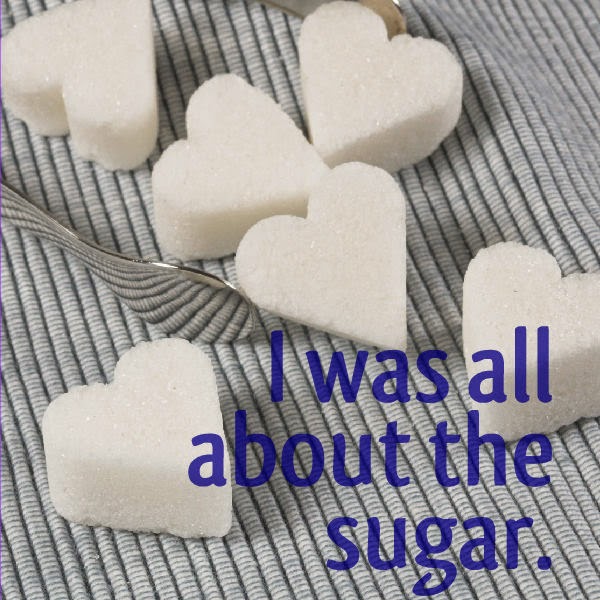 Yes, my scaly, claws-out fire-breathing moment was brought on by a photo in a bridal magazine, displaying a beautiful place setting of wedding china…complete with a heart-shaped sugar cube perched adorably on a demitasse spoon. At that moment, staring down at the glossy 2x3 inch photo I had clipped, I was entirely convinced that acquiring such an item would ensure my HEA. Must. Have. Cubes.

(Meanwhile, my fiancé: “What the hell is a demitasse spoon?”)

Luckily, I didn’t have to destroy the entire city to find them. I just stomped down Broadway to Dean & Deluca and bought out their entire stock. CUBES!

Looking back now, it’s a moment, and a detail, that I laugh about. I can’t believe I let myself fixate on something so trivial. The day was beautiful. It went off without a hitch, and sixteen years later, we are still hitched together! I don’t know if our guests even noticed that amazing, perfect heart of pure cane sugar, nestled in the hollow of the tiny spoon. Or whether they even used it to sweeten their coffee or tea. I was too busy enjoying my day to even notice, or care.

Giveaway:
How about you? Do you have your own Bridezilla story? Or have you witnessed any Bridezilla behavior by normally sane family members/friends? Leave your comment for a random chance to win a copy of DICTATORSHIP OF THE DRESS (in print or e-book, your choice.)

Jessica Topper is an ex-librarian turned rock n’ roll number cruncher.
She can trace her love for the written word back to age three, when she memorized Maurice Sendak’s Chicken Soup with Rice in its entirety. By day, she does bookkeeping for touring rock bands. By night, she creates books of her own. She is the author of two novels from Berkley: LOUDER THAN LOVE (September 2013), and DICTATORSHIP OF THE DRESS (January 2015). Watch for COURTSHIP OF THE CAKE, the second in her “Much ‘I Do’ About Nothing” series, releasing in Summer 2015.

Giveaway ends 11:59pm EST Jan. 18th. Please supply your email in the post. You may use spaces or full text for security. (ex. jsmith at gmail dot com) If you do not wish to supply your email, or have trouble posting, please email maureen@JustContemporaryRomance.com with a subject title of JCR GIVEAWAY to be entered in the current giveaway.
Posted by Maureen A. Miller at 12:30 AM