Do you watch reality TV shows?

Congratulations to "Nancy W." the winner in Monica's giveaway. Thank you to all who participated!


Do you watch reality TV shows? I don’t, but I was on one! Sort of. It wasn’t a competition show like we see now, and producers acknowledged that it wasn’t really reality by calling it a “docudrama.” You see, I’ve been in this amazing bunco group for over 15 years now. Back in 2007, we attended regional semifinals in the World Championship of Bunco (yes, it was a real thing), and producers noticed us and invited us to attend the final championship in Las Vegas as part of the Lifetime network’s show Let the Good Times Roll. Seriously, you can’t make this stuff up. We played in the Vegas tournament the year before, but we weren’t part of the show.

The experience was so much fun! The game I love in a city I love with girls that I adore. We gambled, got tattoos, took in a racy show, and competed in the tournament. We went home exhausted but happy, and closer than ever.

When the show aired, we were shocked to see that we’d been portrayed as a group of catty individuals who didn’t seem to like one another very much. Footage was taken out of context, manipulated, or in some cases, fabricated completely to make it seem like the group fell apart the longer we were there. I guess the truth—that friends went on a trip together and had a great time—wasn’t nearly as interesting as what they came up with!

When I decided to write The Confection Connection, I used my brief experience with reality TV as the basis for my characters’ previous relationship. In this story, two former rivals find themselves competing for a job in the real world and end up thrown into a pretend romance because of a misunderstanding. I love the idea of two competitors being forced to keep up appearances for the sake of TV cameras, then slowly finding that their fake feelings have become real.

Monica Tillery has been a social worker and a massage therapist, but is now living her dream as a romance novelist.  She loves nothing more than to get lost in a beautiful love story, holding her breath as the hero and heroine fight their way through obstacles to get to their happily ever after.  Monica lives in Texas with her own real-life romance hero, her husband of over a dozen years, and two wonderful sons.  When she’s not reading and writing romance, Monica loves playing bunco and bingo, hanging out with friends, and wasting time online.  She loves hearing from and connecting with readers.  Follow her on Facebook (where you’re always likely to find her!) at www.facebook.com/monicatilleryauthor, on Twitter @monicatillery, or visit her website www.monicatillery.com. 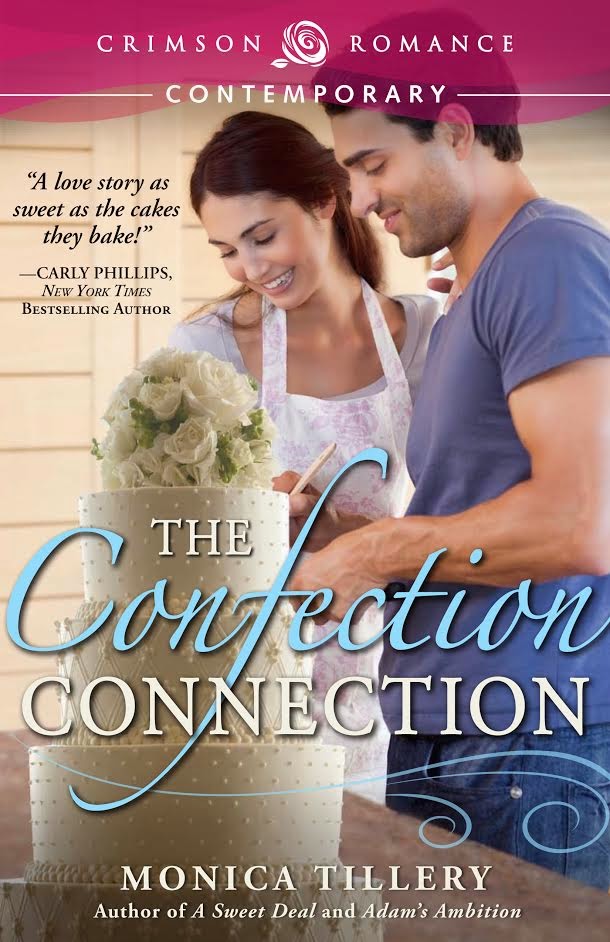 After appearing on a popular reality cooking show, Carly Piper’s newly opened bakery is landing her in debt. Making the cakes for the celebrity wedding of the year might be the answer to all her troubles.
Problem is, her rival from the show, Michael Welch, is also pitching his bakery to the celebrity couple. When a misunderstanding leads the quirky bride to think they’re a couple, she wants to hire them both.

Stuck traveling together to keep up appearances, the pair finds themselves cozying up to the idea of making their fake relationship real. But a once-in-a-lifetime opportunity leaves these two wondering whether they have the right recipe for success after all. Can Michael and Carly create something lasting or is their love a half-baked proposal?

Giveaway:
I’d love to get this book into your hands! Just comment about reality TV—what you love or what you hate about it, and I’ll send a free ebook to one winner.

Giveaway ends 11:59pm EST Jan. 11th. Please supply your email in the post. You may use spaces or full text for security. (ex. jsmith at gmail dot com) If you do not wish to supply your email, or have trouble posting, please email maureen@JustContemporaryRomance.com with a subject title of JCR GIVEAWAY to be entered in the current giveaway.